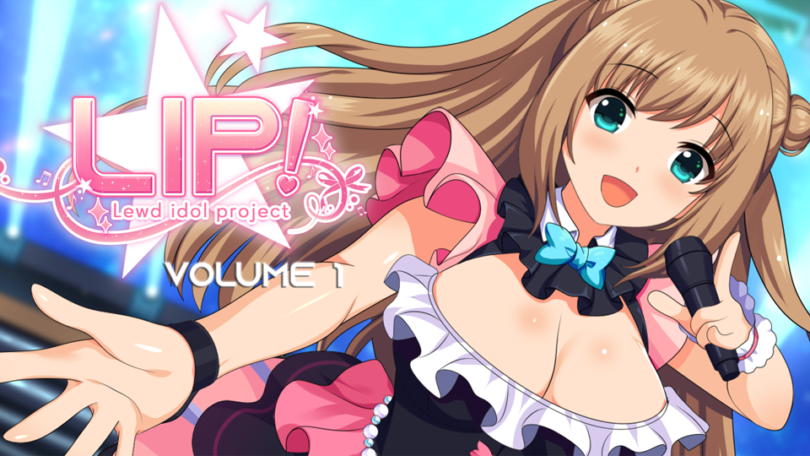 What would you do to achieve your dreams? How far would you go? 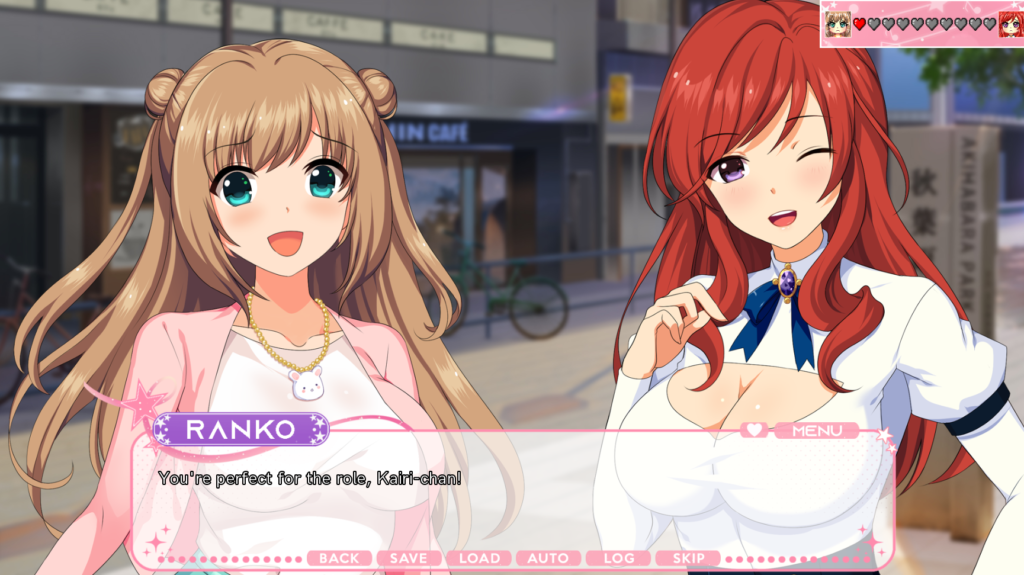 LIP! Lewd Idol Project Vol. 1 is the first release of the Lewd Idol Project series, which consists of several short nukige developed and published by Toffer Team and Denpasoft. The game first launched as a Kickstarter demo back in October of 2020, and received a full release on June 23, 2o21. You can currently purchase the title—which averages around 3 hours of play time—on Steam for $4.89.

So, you ask, what is the game about?

Kairi is a young, cheerful girl with a dream—she’s gonna become the best, most popular idol ever! Or, at least, so she thought…

After she goes all in and moves to Akihabara, she quickly finds herself running short on money and high on stress. Her frustration over her increasing debt is only matched by the despair she feels over being rejected by nearly fifteen different talent agencies.

That’s when she meets self-proclaimed “producer,” Ranko, who introduces Kairi to her most ambitious new enterprise—the Lewd Idol Project.

Help Kairi bring her dream to life in this new lewd adventure, and join her as she explores the amazing city of Akihibara in search of new girls to recruit to LIP!

TLDR: It’s all there in the title—get ready to experience some naughty adventures as our wannabe idol lewds her way to the top!

Note: As always, I’ll be using the CAWPILE system to rate the game—each category will receive a score from 1 to 10, with the entire game receiving a score of 1 to 5. Do bear in mind that I’ll adapt the system in order to fit visual novels as a medium. 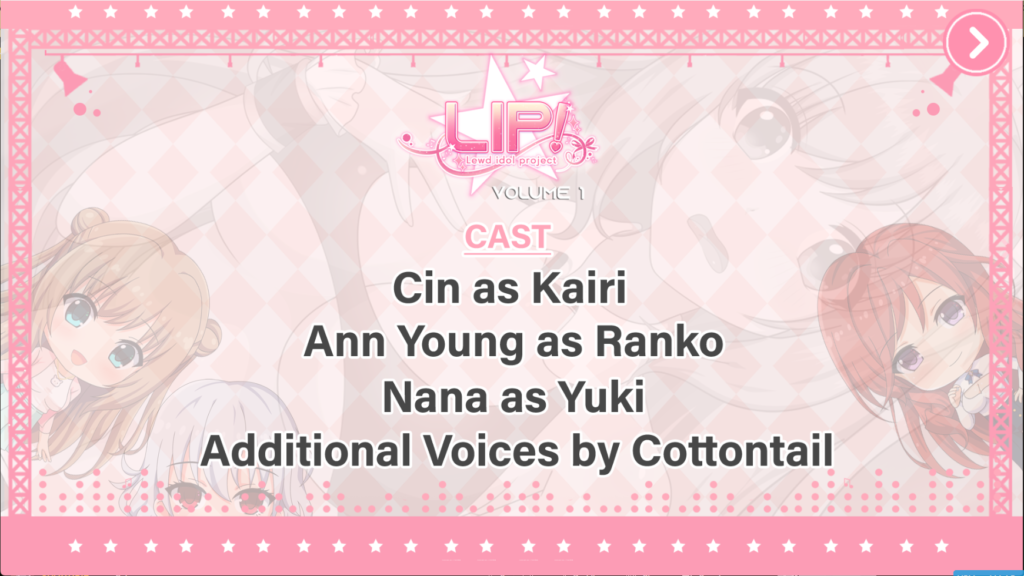 The voice acting gives the characters a great deal more life as well, though unfortunately the game isn’t entirely voiced. Instead, we get a handful of generic one-liners that pair with the written lines. It’s definitely better than not having any voice-over at all, but I’ve got to admit they get a bit repetitive at times. Kairi’s awawawa! in particular is going to live rent free in my head for days. 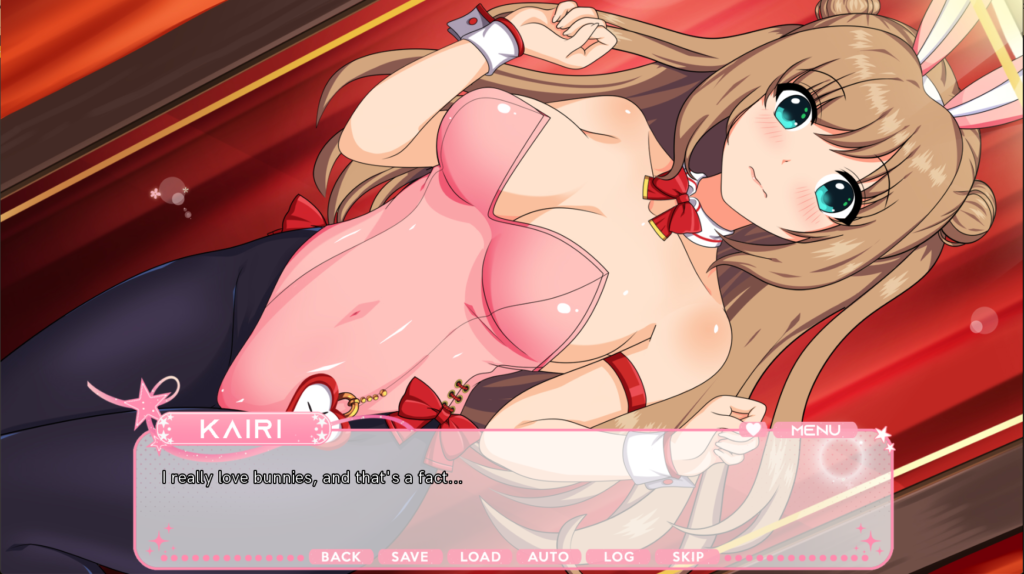 Thai Chau and Sang were responsible for the game’s character art, with the former providing the CGs and the latter providing BGs.

The game’s art was definitely a highlight for me! For a low-budget game, it really surpassed my expectations. The only negative I have is that in some of the CGs the character’s eyes are looking in weird directions, which gave me the occasional uncanny-valley feeling. 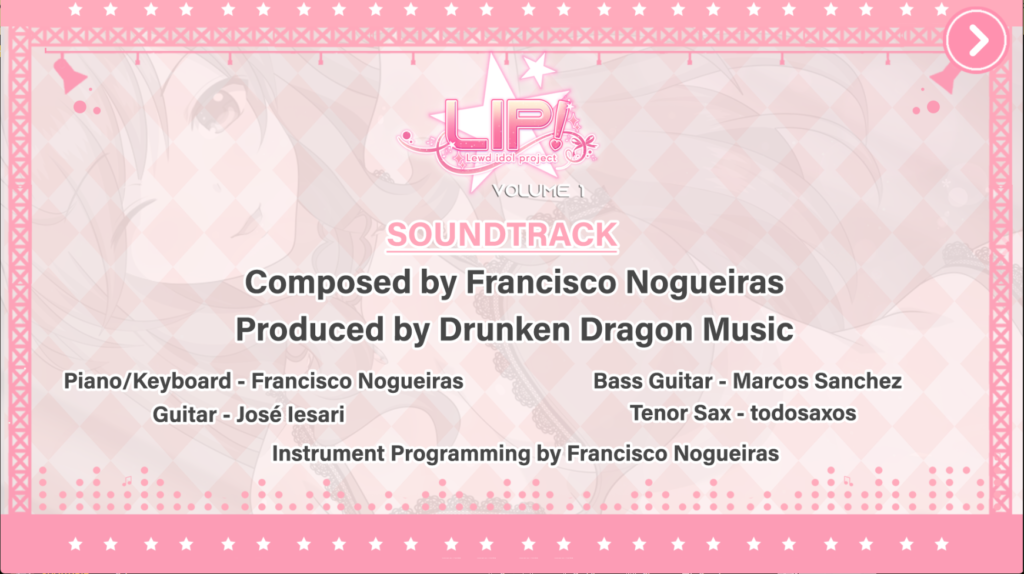 The soundtrack was composed by Francisco Nogueiras and produced by Drunken Dragon Music. The main theme is called “Cheer Up High!” with vocals provided by Slaleky, Cin, and Side Quest. I thought the song was super adorable, and was happy to listen to it every time I booted up the game.

The soundtrack was decent—it fit its purpose well enough, and it fit the game’s setting pretty well. The music was generic, but I didn’t find it annoying. (And believe me, I’ve played plenty of VNs that tempted me to hit the mute button.) 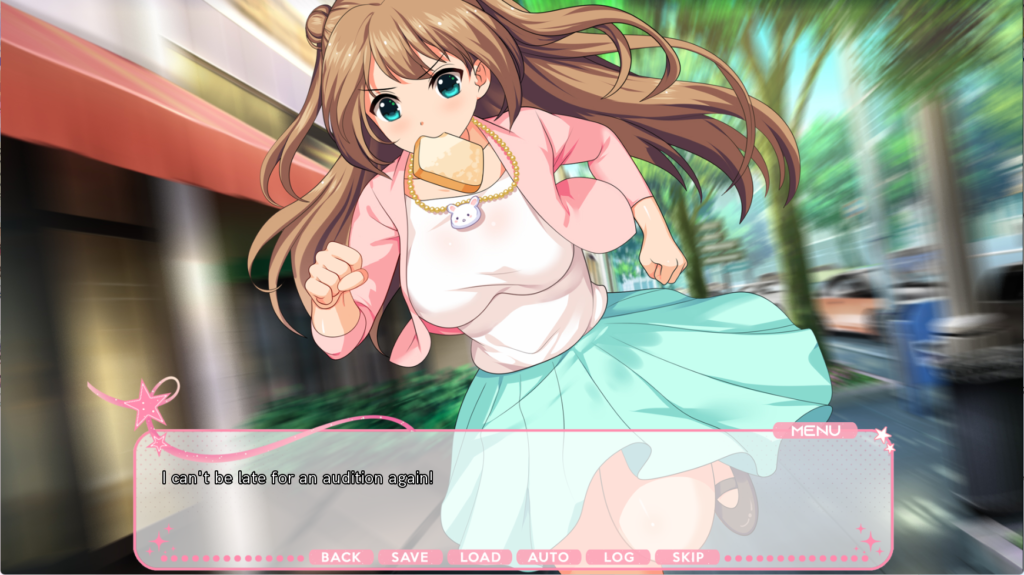 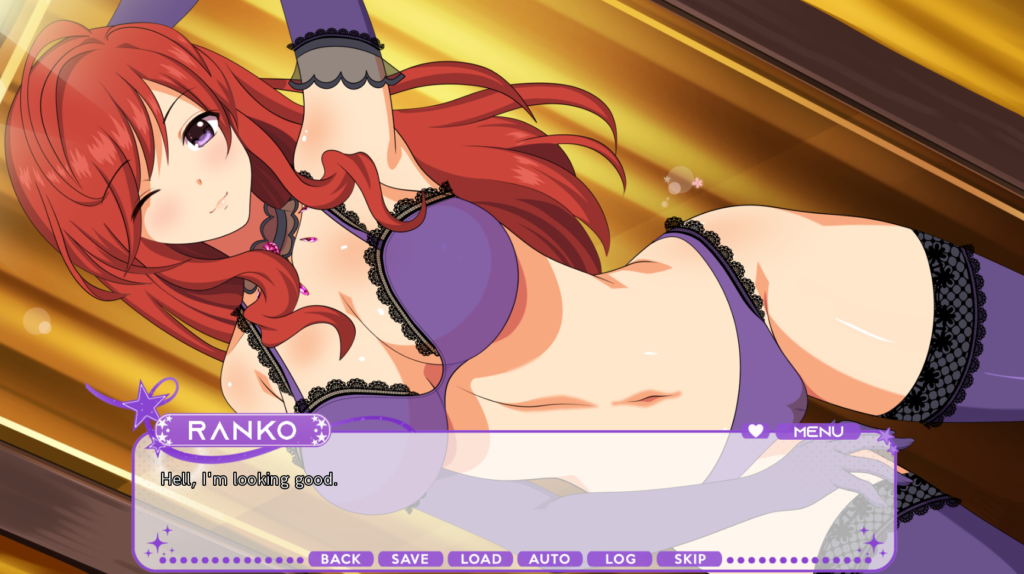 There’s no lack of choices in LIP! Lewd Idol Project Vol. 1—to be honest, there are so many it can feel excessive at times. These choices don’t really have much of an effect on the story itself; they just change the dialogue for a few lines before shifting back to the main line of the story.

Where the choices have their true effect is in their influence over a little feature called a “relationship meter.” The relationship meter effects how well Kairi-chan gets along with Ranko, and can be filled by choosing the right dialogue options. Unfortunately this appears to be more of an aesthetic choice, since the relationship meter doesn’t actually have any direct effect on the story, but you can still see how well you did in a playthrough when the credits roll—they include a percentage of how many choices you got right. If you want to max out your score, I went ahead and made a guide, which is available here!

Beyond the choices, the game does have other mechanics—as you explore Akihabara, you’ll be able to play various minigames and collect plushies and figures, as well buy different items. The items you collect during this portion of the game can have an influence on the story farther down the line.

The game also has a wardrobe you can access which allows you to check out Ranko and Kairi-chan in the outfits you’ve unlocked so far, and a photo mode which allows you to have a photoshoot with one or both of the girls. Photo mode also allows the player to choose which outfits the girls wear, their facial expressions, and the positions they take, as well as giving you the ability to change the background of the photoshoot. 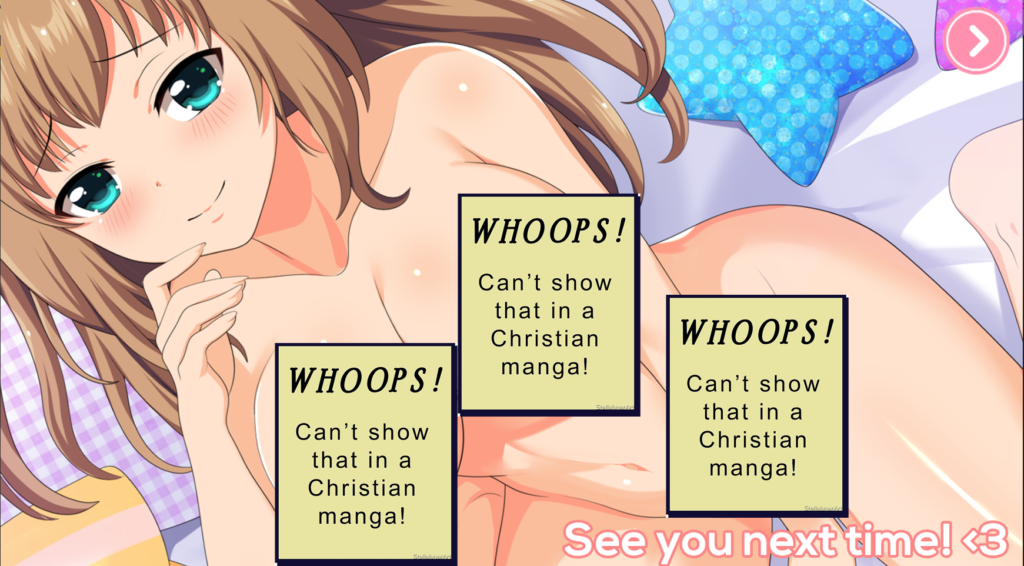 I’ve got to start off by saying that I’m not exactly your typical nukige-enjoyer, so please take that into account when looking at my scores. Despite not being an avid consumer of the genre, I did actually enjoy the overall experience of LIP! Lewd Idol Project Vol. 1. Besides the most obvious draw of the game—our sexy and naive Kairi-chan, of course!—there were a lot of lines that made me laugh, and dialogue was good enough that it kept me reading.

I might not have praised it much in my review, but it’s a good game. It’s short and sweet! If this is what the developers could achieve with a low budget, I can only imagine how much they could improve if they didn’t have to worry as much about their expenses.

I’ll admit it—I’ve become a LIP fan. LIP! Lewd Idol Project Vol. 1 gets a 3/5 from me. If you’re a fan of yuri with hot vanilla scenes and sexy cosplay, this is the game for you! 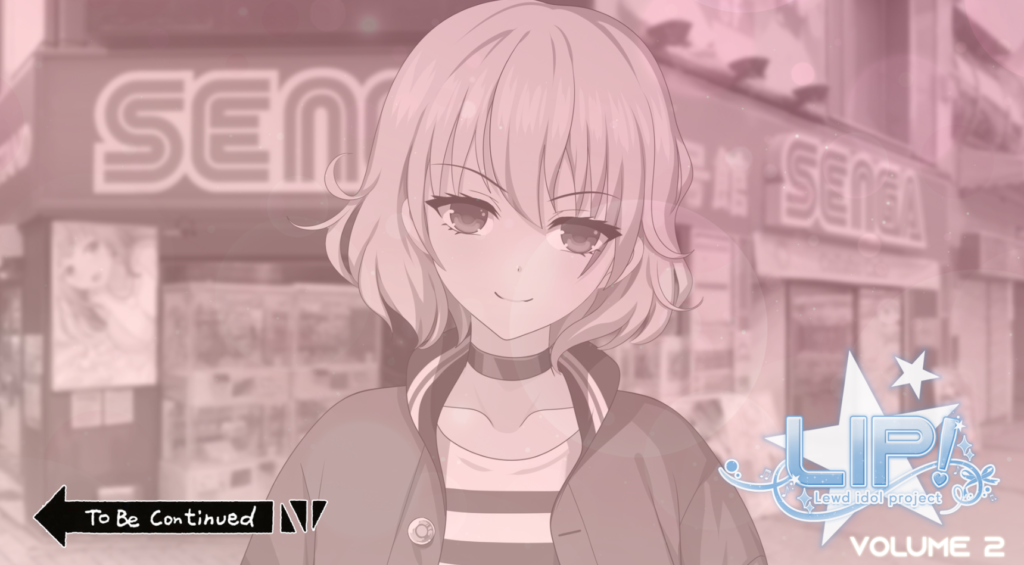 You can buy the game on Steam, Denpasoft, JAST and Nutaku.