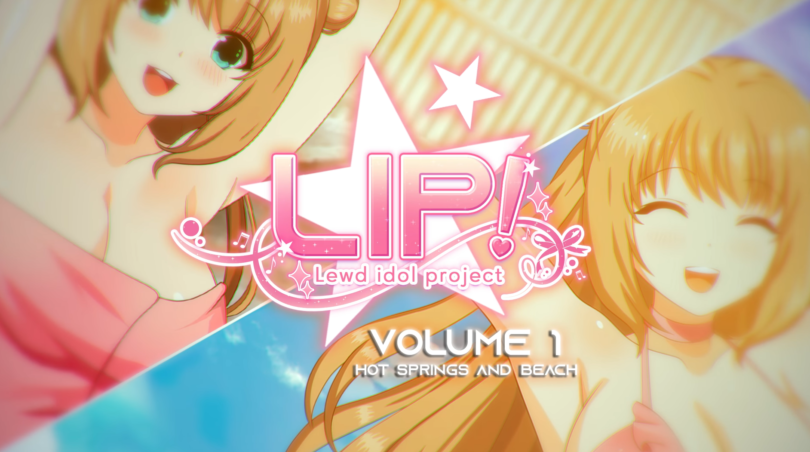 Get ready for some piping-hot water, some blazing summer sun, and some steamy girl-on-girl action! 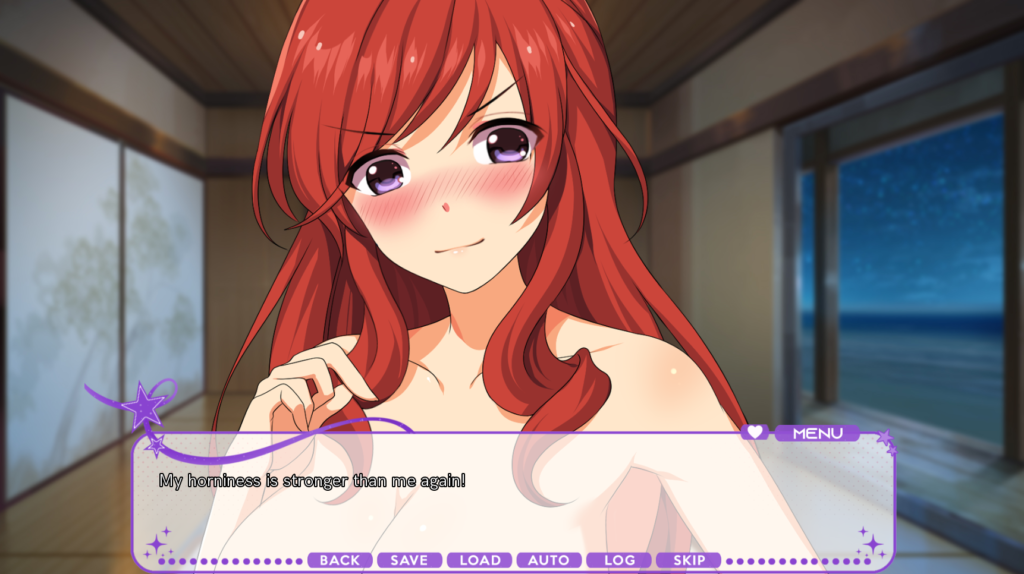 Just like in the previous entry, we’re following Kairi-chan and Ranko’s steamy adventures–only this time, they’re headed out of Akihabara to visit a hot spring and a beach!

So, what’s the game about? According to its VNDB page:

It’s the ultimate fanservice experience! A 2-in-1 yuri lewd adventure featuring Kairi and Ranko from LIP! Lewd Idol Project on a relaxing trip to the hot springs, and a hot visit to the beach! Join the fun and enjoy your day off while having a lot of girl-on-girl action! Are you gonna miss it?

LIP! Lewd Idol Project is a yuri Visual Novel series about a girl’s adventure to becoming an Akihabara Lewd Idol!

Join Kairi in her adventure and explore the city, meet new friends, and try to form a group overcoming all the odds while having a lot of girl-on-girl action!

Note 1: As always, I’ll be using the CAWPILE system to rate the game—each category will receive a score from 1 to 10, with the entire game receiving a score of 1 to 5. Do bear in mind that I’ll adapt the system in order to fit visual novels as a medium.

Note 2: I’ll be giving my score mainly based on my experience with the main game, so I won’t talk too much about things that were previously mentioned on my review of it. If you want a more detailed version, check out my inital review here! 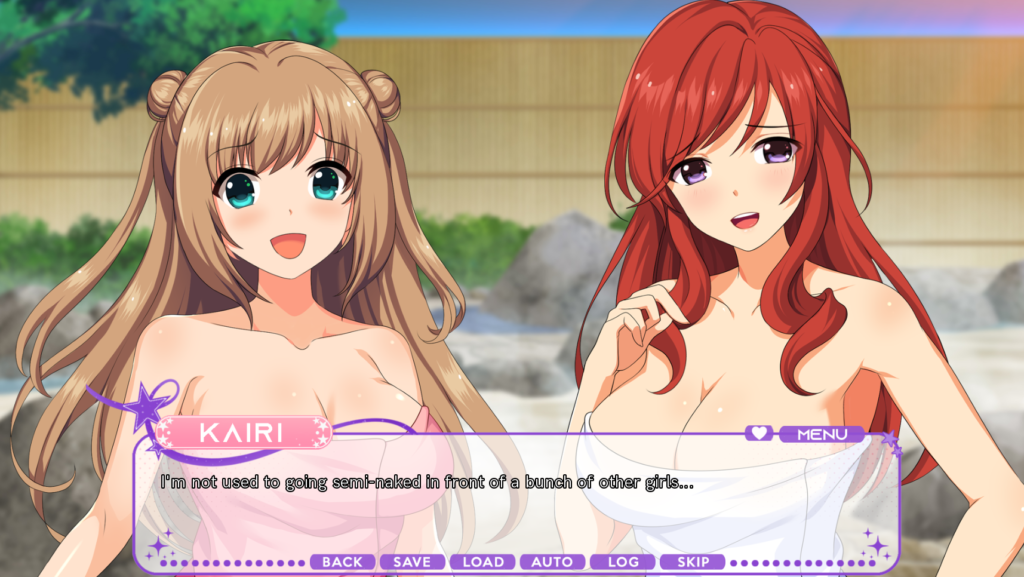 If you compare Kairi-chan and Ranko’s personalities in these episodes to how they’re presented in the main game, you’ll find the overall feel is much the same. I did notice, however, that the way the two characters interact shifts slightly. Kairi is visibly more relaxed around Ranko, and you can tell that the two girls have a closer relationship here than they did in the original title. This game is just a side-story, so I wasn’t expecting significant character development, but it was really nice to see that our protagonist is getting more comfortable with her new life.

That said, our shy, naïve Kairi-chan enjoyers have nothing to fear! While Kairi may be adjusting well, she’s still as bashful as ever.

As for voice acting, this title doesn’t have any improvement over the main game–no additional voice lines have been implemented. I can only hope LIP! Lewd Idol Project Vol. 2 has more voice acting to offer!

The art for both side stories is drawn once again by Thai Chau and Sang–the former being responsible for the CGs and the latter for the BGs. In my review of the main title, I complained about getting an occasional uncanny-valley feeling playing through the H-scenes, but I’m happy to say I no longer had that issue with this entry of the franchise.

In addition, I could tell the quality of the CGs had gone through a noticeable improvement when compared to the main game, especially during the H-scenes. The art was consistently good and enjoyable to look at.

The character design in this title is top-notch too! Five new outfits were added for Kairi-chan and and four more were added for Ranko. You’ll even get to see different CGs depending on what outfits you choose during your playthrough.

In my opinion, that level of customizability just goes to show the amount of dedication the developers put into making this game. 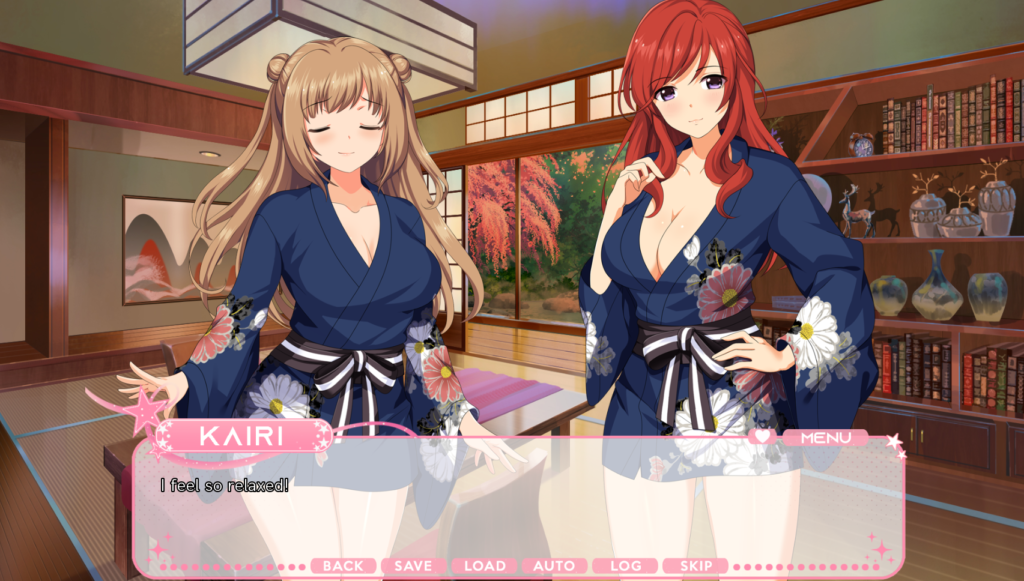 The main game was already transparent enough in its focus, but this title goes all-out and proudly proclaims it–this game’s all about joining two gorgeous girls as they enjoy some naughty “relaxation” sessions.

The atmosphere is pretty laid-back–just like vacations should be. It’s also nice that this game doesn’t feel like it’s trying to keep to a storyline, which makes everything feel more honest and real.

As far as the music is concerned, it’s all the same as the main game, besides a new opening song. 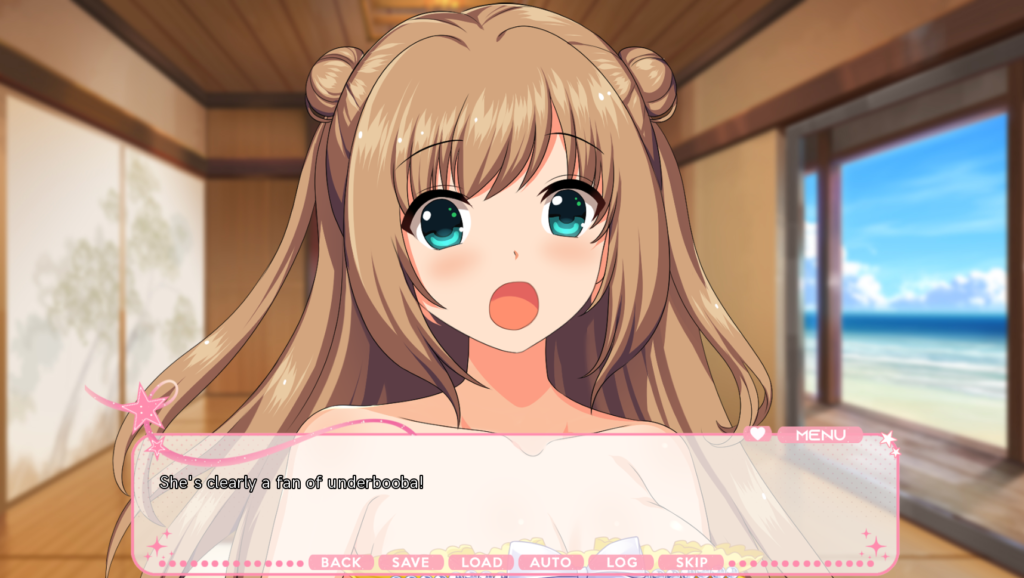 When it comes to the game’s writing, I don’t have much to say this time. It’s very similar to the writing of the main game, and is what I’d call your typical nukige style: not a trainwreck, but certainly not meant to be taken seriously. 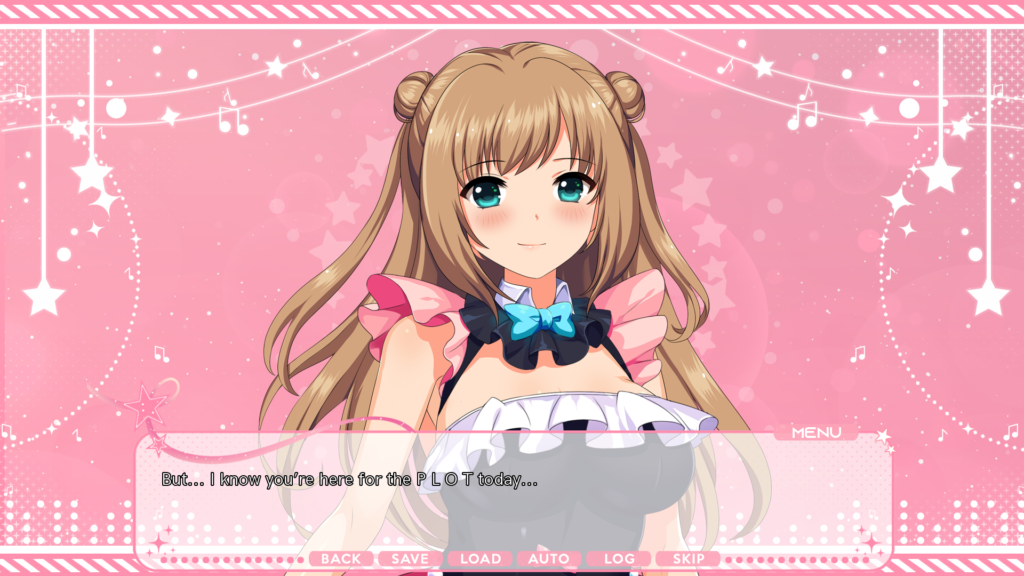 Even though this title is made up of side stories, I actually found myself enjoying it way more than the main game–the plot feels way more contained, and the spice level was more to my taste. In the main game, I felt like the author was trying to include a little bit of everything into the plot, whereas the Hot Springs and Beach episodes benefit from their shorter runtime, keeping the story more stable.

I also enjoyed how the plot in these episodes shifted from the 100% linear story of the main game to a story with multiple branches. Each episode has three different endings, giving the game six endings in total. Some of these endings were short and rushed, but others actually really fleshed out Kairi and Ranko’s relationship and the dynamic between the two, while others even gave us some hints on future plotlines.

If you haven’t played the main game for a while (or not at all, even), don’t worry–at the start of this title, you get a ~hot~ recap of the story so far, just in case you’ve forgotten anything😉. From there, you can choose to play the two episodes included in this title in order you want, but do be aware that the Hot Springs episode canonically comes before the Beach episode.

If you play the Beach episode first, just be aware that Kairi-chan and Ranko make a few references to things that happened during their stay at the hot springs. They’re only tiny spoilers, but if you care about that sort of thing, I’d recommend going for the Hot Springs episode first.

When it comes to the endings I found most satisfying, I definitely have to mention the bad ending for the Beach episode–it tackled an issue which I think needs to be worked out in order for their relationship to progress, and which I felt had been continually ignored until then. I hope they continue to investigate the issue in Vol. 2, but this is a nukige, so I don’t have high expectations. It would still be nice to see, though!

I’ve got three words for the mechanics–simple but effective! Last time, I complained about the “relationship meter” (or as I like to call it, the love-meter) and how the choices were ultimately meaningless, making the feature pointless. This time, however, it seems to work! Now, what you choose can dictate whether you get the true, neutral, or bad ending.

If you are interested, I made a guide for every ending, available here!

Besides the ~love-meter~, there is also a gallery for the CGs and a ‘replay mode’, which allows you to replay the H-scenes you find the most steamy. 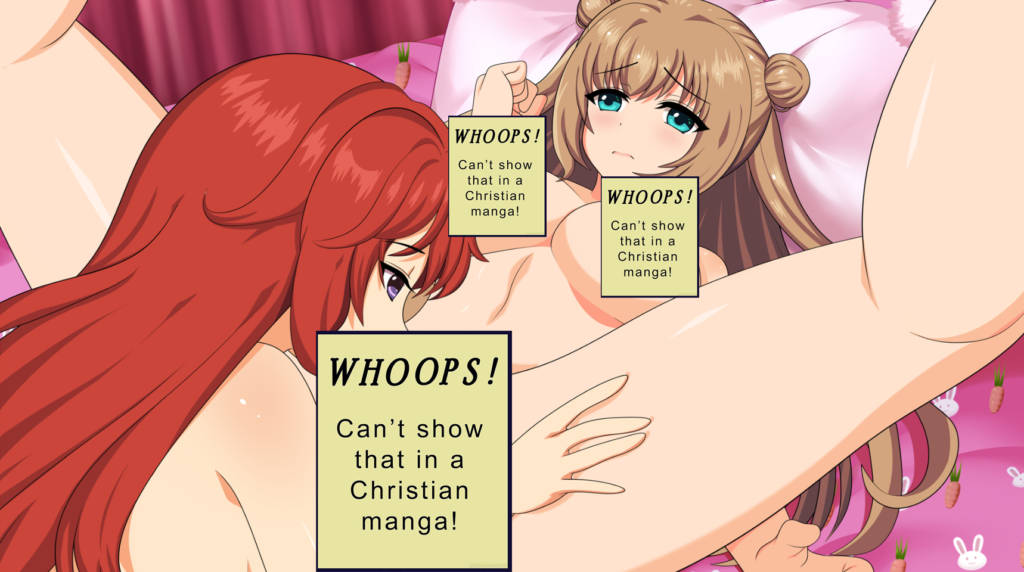 This one was actually a really fun, enjoyable read! I usually find side stories and spin-offs to be a tad boring, I will admit, but this one managed to impress me! I also liked the fact that Kairi-chan and Ranko’s relationship had already formed and reached a good place. It made me enjoy the sexy scenes a lot more, especially since a lot of them were total turn-ons.

In conclusion, LIP! Lewd Idol Project Vol. 1 – Hot Springs and Beach Episodes isn’t an amazing read, but it sure as heck isn’t a bad one either! I give it a solid score of 3/5. If we’re getting specific, I could even give it a 3.5 out of 5.

With all the improvements shown in these episodes, I can’t wait to get back to Akihabara to continue following Kairi-chan’s adventures! Keep an eye out for my review of LIP! Lewd Idol Project Vol. 2!

Feeling a hankering to check out the game? You can buy it for a mere $3.99 on Steam, Denpasoft, JAST and Nutaku.