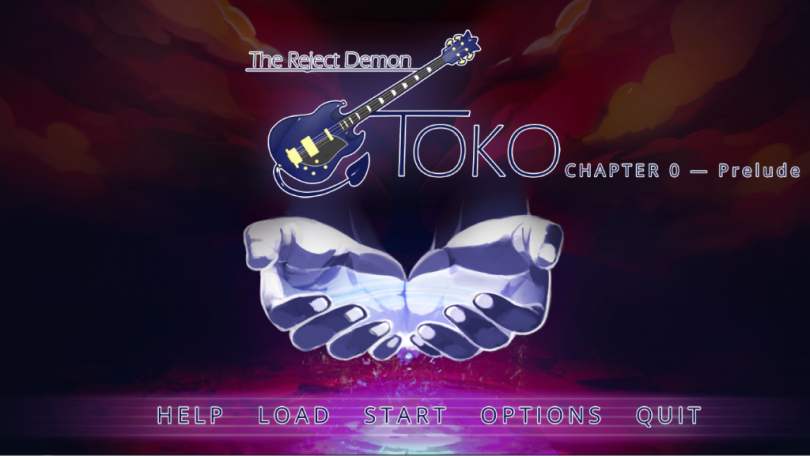 Originally created as a short story for a Game Jam (basically, a get-together where game creators create a full game from scratch in 24-72 hours) in early 2014, The Reject Demon: Toko was so well received that Lupiesoft decided to create a kinetic novel split over four chapters to tell the entire story, and partnered up with Sekai Project to publish the game on Steam. I was lucky enough to get a review copy, and holy hell am I glad that I had the opportunity to play this, because it is AWESOME.

The prelude chapter of Toko gives readers a taste of what is to come, and clocks in at a little over two hours.  The story begins maybe a dozen or so years in the past, when demon-in-training Toko is tasked with ferrying a human’s soul to purgatory.  This is how the demons gain strength, and are able to survive. However, instead of doing as she’s tasked, Toko decides to help the little girl, and later on explains to the little girl that she was supposed to ferry her soul.  The naive girl, in response, writes the word “soul” on a piece of paper and hands it to her.  Well, that works I suppose…

Cut forward to the present, Toko is revealed to still have never successfully ferried a soul to the afterlife, and finally the demon world decides to stop giving her second chances, and kicks her out.  Not five minutes in the human world, she ends up literally colliding into Nadia, a very kind girl who offers to take Toko in after realizing she had nowhere to go.  Toko more or less latches onto Nadia, and some cute borderline-romantic scenes follow.  It is also at this time that a very cryptic tomboy named Ginxhou makes her appearance, which results in some really funny confrontations. 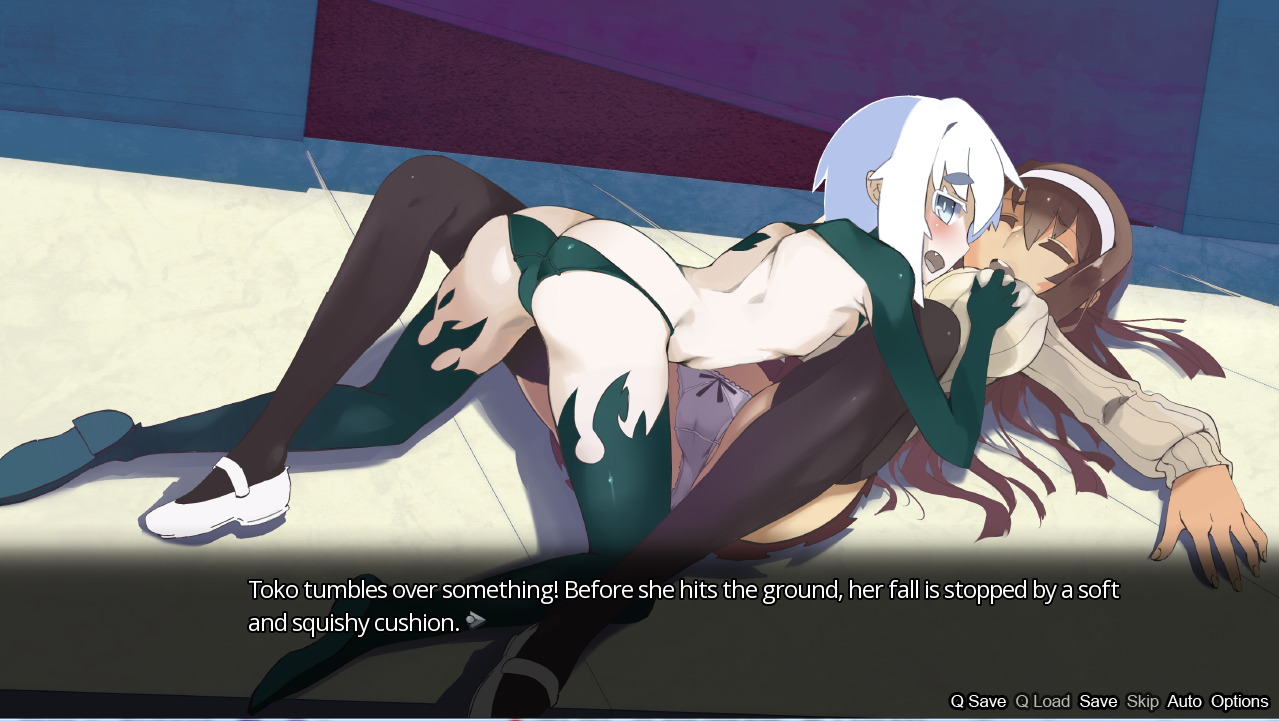 I was so entranced by your boobs that…umm… Hi?

The next night, Nadia is kidnapped by a girl named Devon, a Demon who exercises control over puppets.  Toko, obviously pissed off at this turn of events, goes to reclaim her beloved friend, but gets the crap beaten out of her.  During the fight Toko hears a voice that tells her “Sing all your sins into me.”

Now, this is where the game turns from good to amazing. A spirit materializes from Toko in the form of a GODDAMN BASS GUITAR, and from that guitar a badass named Epiphany arrives.  Between the two of them, they turn the tables on Devon, defeat her, and free Nadia, who reveals herself to be the girl who had given her the scrap of paper all those years ago.

Of course, demons who have never ferried souls aren’t supposed to have these kinds of abilities, so Toko is summoned back to the demon world, where she is informed that she will be taking part in the Intercircle Rock Competition – a Rock’n’Roll competition between the three major circles of hell.  Nadia is conscripted to be her manager, Devon (who is actually Toko’s sister) as her drummer, and Ginxhou as her saxophonist. 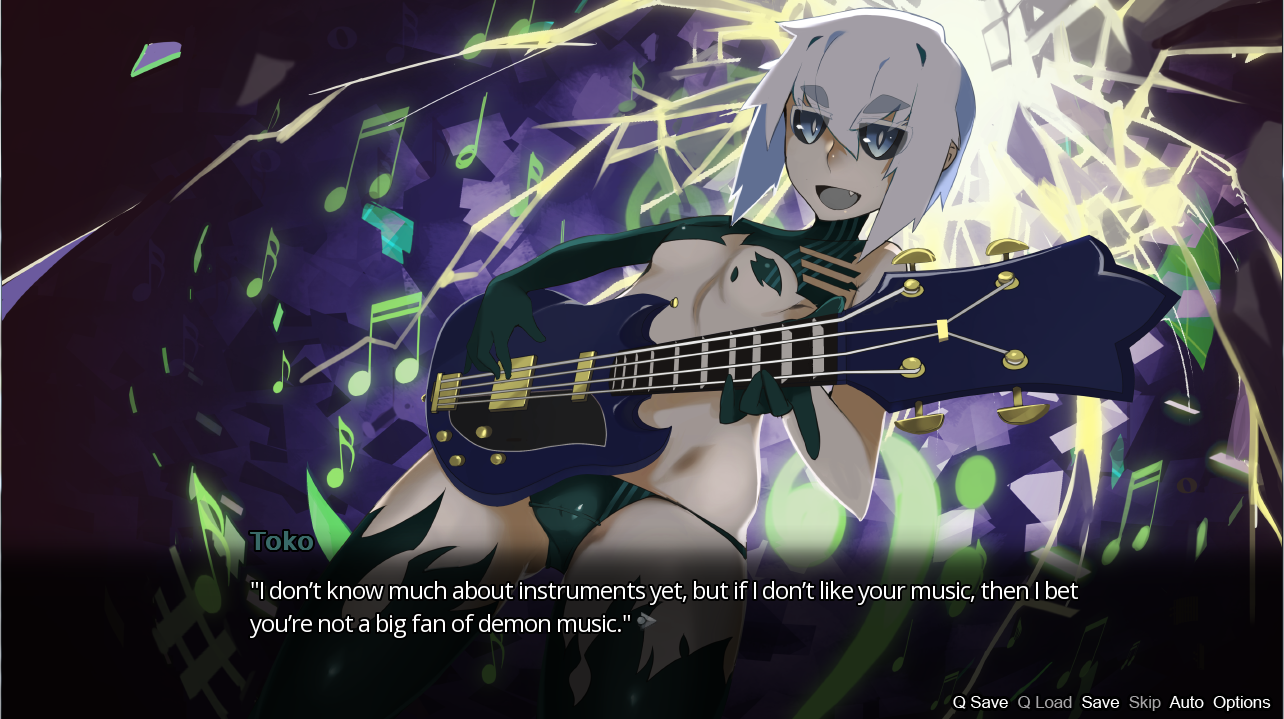 I’M ON THE HIIIIIIIIIGHWAY TO HELL~

The rest of the chapter follows the newly formed group around, and introduces all of the primary characters that will likely be the focus of this story.  It’s a shoujo ai with rock music – what’s not to love?

Okay, first off, SHE KILLS THINGS WITH A GODDAMN BASS GUITAR.  I was sold the moment I realized that was what this was turning into.  Granted, while I’ve never done much more than strum a guitar a few times, I have played the piano for twenty years, so anything revolving around music is instantly on my “Must Play” list.  The music, as expected, is fantastic – very bass and drum-y – and I turned up my speakers to let that flow out.  If you have a good set of speakers and angry neighbors, however, be forewarned that your house will shake with the right woofer.

The artwork was pretty neat as well.  It combines pastel scenes with occasional backgrounds that reminded me very much of Soul Eater.  Same with the character sprites, though I think some facial expressions were misused.  Pissed off Toko was sometimes represented with a “not-so-pissed-off” face, and it just looks like the wrong sprite was used. What did throw me off, however, was the writing style.  I’ve never really been a fan of the present tense writing styles (see the first image for an example).  I think it would have sounded a lot better written in a past tense style, but that’s more of a nitpick from a writer than an actual grievance.

But overall this chapter is fantastic, and for five bucks, it’s definitely worth picking up and reading in a night.  Plenty of action, plenty of laughs, lots of fun.  This shows a lot of promise, and I definitely cannot wait for the next chapter to come out! I will most certainly be picking it up to review! 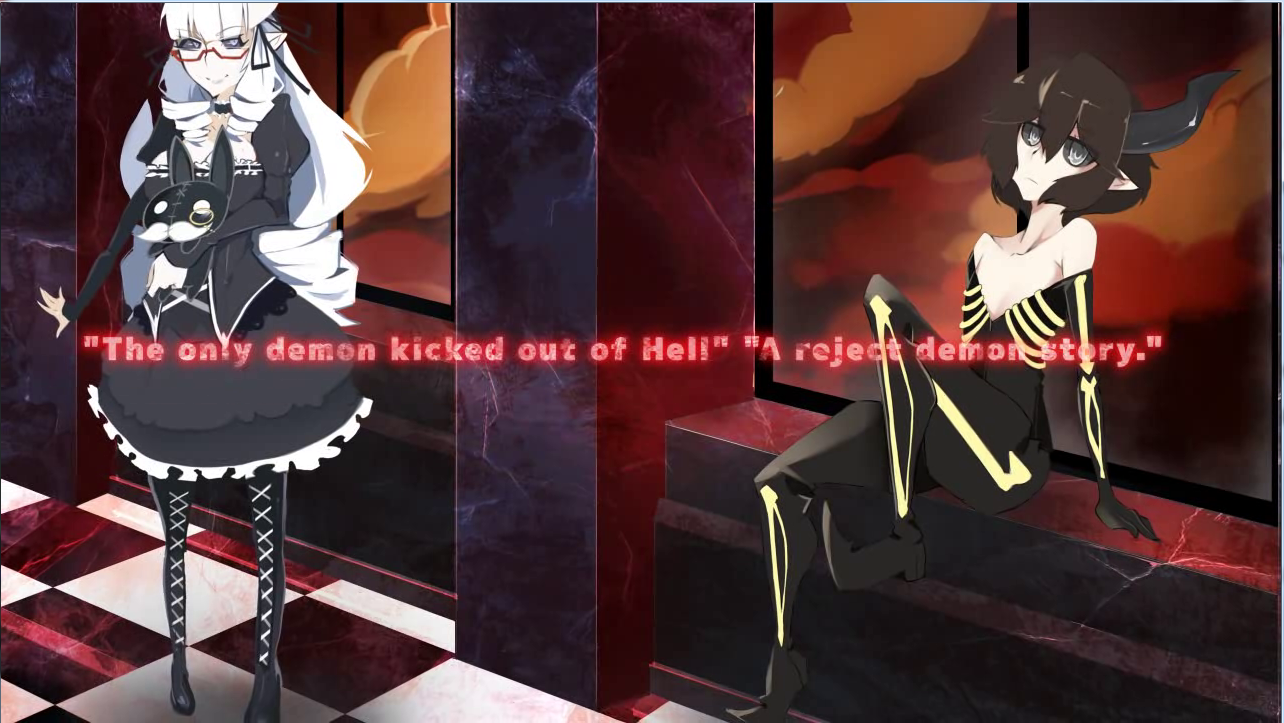 If you’re kicked out and asked to come back, are you still a reject?

Edit:  I have been notified by Taosym that the game will take place over four games (Chapters 0-3) rather than five.  This has been corrected in the review!