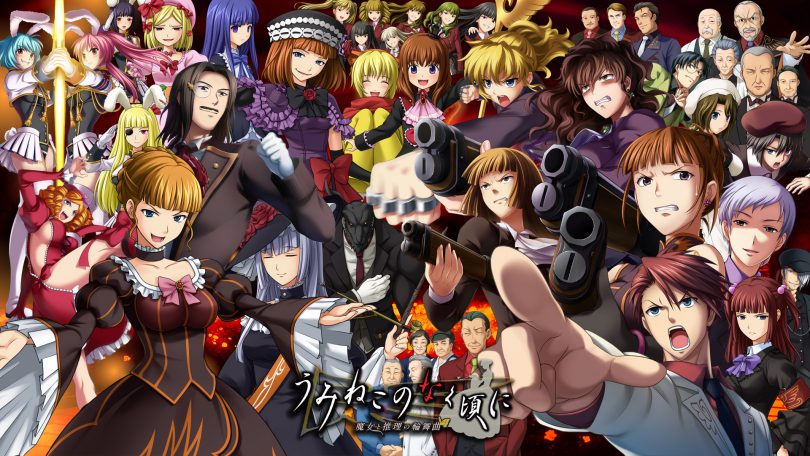 I am torn. In many ways Umineko no Naku Koro ni is a great visual novel…and yet in many ways it falls short of being one. At times while reading I felt that it would surely become one of my favourite tales. Its sheer energy and uniqueness made it a wonderful experience. However, there were more times I was bitterly disappointed by the way events were portrayed and the direction of the story itself. Ryukishi07, having also written Higurashi, has some kind of odd talent for producing stories with excellent ideas and writing quality that still manage to claw their way back down to mediocrity, and I find it thoroughly frustrating.

The isolated island of Rokkenjima, the illustrious Ushiromiya family, the Golden Witch Beatrice, and a series of horrific and unexplainable murders. On the day of his family’s annual conference Ushiromiya Battler is drawn into a world of madness in which Mystery and Fantasy vie for control as his loved ones fall dead at his feet. With magic-hurling witches and their demonic familiars on one hand, and hidden rooms with deadly traps on the other, it is up to Battler to find the truth surrounding the crimes plaguing his family home. If his sanity survives the ordeal, he will yet have to decide if the truth is worth knowing.

Much like its predecessor Higurashi (review here), Umineko just doesn’t seem to know what it wants to be. Predominantly of the mystery genre it constantly challenges its readers to solve the puzzles it presents, with closed-room murders and other unexplainable circumstances being its bread and butter. However, the entire story is more or less presented from a fantastical point of view which is both a wonderful and terrible thing. The inclusion of the witch Beatrice and her various minions allows for a lot of character to make its way into the story, providing a source of brilliant antagonism for Battler as well as a contrast to the ordinary, everyday confrontations and emotions of the story that can be really quite remarkable. On the flip-side, however, that aspect absolutely cripples the reader’s ability to respond to the “challenge” Ryukishi07 poses, as there is almost no way to tell which scenes are factual and which have no truth in them whatsoever. In addition to this there are times that the descriptions of events border on the absurd, completely jarring you out of any feeling of immersion you might have had. Someone launched 10 spears which each broke into 3 rose petals followed by 8 horses resulting in 673.5 lightning bolts…what?!

Moments of odd writing aside, the most enjoyable and exciting portions of the novel stem from the interface between fantasy and reality. Battler’s arguments with the near-omnipotent witch Beatrice for the existence of mundane explanations for various murders and occurrences are absolute gold and will often run parallel to your own thoughts on how things might have been done. In fact, I would go so far as to say that those interactions are what make the first four episodes of Umineko so much fun to read and be involved in. It is unfortunate, then, that they are mostly dropped for the remaining 50+ hours of reading you would have to do to finish the story. Ignoring for a moment the character changes that I will discuss later, what used to be two charismatic rivals attempting to out-argue each other with entertaining back-and-forth and presented evidence devolves into wild claims with nothing to back them up that readers are forced to accept as truth because of how the story works. At the same time, as mentioned earlier, the scenes you are shown become less and less reliable as evidence as the story progresses. This denies the reader a lot of the enjoyment that may have been expected of the rest of the series and furthermore, for the reader who is trying to keep up with the reasoning being used, it’s a game breaker.

And here’s where we get to the crux of my issue with Umineko. At the end of the fourth episode there is a turning point where the story starts to shift away from its mystery aspect. While that in itself is not a problem, it was the mixture of the two genres that made the earlier experience what it was and the fantasy simply doesn’t stand up on its own. When the final episode of a huge eight episode story contains next to no references to its earlier mysteries there is something wrong. Setting aside the fact that the plot rapidly declines in quality once you reach Umineko’s second half, it is an absolutely undeniable truth that part of any mystery tale is the reveal. The immense feeling of satisfaction you feel if your theories were correct or the bedazzled wonderment you feel if they were wrong is crucial to a story like Umineko no Naku Koro ni. Let me tell you right now that there is no explanation, no closure, no resolution and no gratification in Umineko’s mysteries. If I were to be completely honest I would admit that there are glances backwards and hints every now and then but when the entire foundation of what makes a story great lies within the inherent mystery there needs to be explicit review and revelation of what has occurred, and Umineko’s greatest sin is that it does not have this. As a side note, when a writing decision (such as not to include an explanation in your ending) needs justification within the text itself, it indicates to me that the writer is aware that it is not a good idea and is copping out of their duty to properly conclude their story.

Unfortunately, Umineko also inherits some of the bad habits of the earlier When They Cry titles. Higurashi’s chapter format makes a return, slowing down the pace of the story whenever a new chapter begins, though in this case it’s not quite as jarring and makes a lot of sense when you consider the plot. In addition, though it’s not as noticeable, thought processes are repeated over and over again as though we’re expected to have forgotten them almost immediately. Strangely enough, neither of those issues make as much of a negative impact as this third new one. I can appreciate bringing in new characters to keep things fresh; it’s just something that makes sense. Umineko’s cast, however, grows so large it becomes impossible to give a damn about many of the characters. Adding to this is the fact that many of them only show up for an episode or two, making it incredibly difficult to develop a connection with them. Still, side characters being unremarkable is nothing new, right? As long as the main characters remain the focu-

Wait. So you’re telling me (or I’m telling you, I guess), that the main characters of the earlier episodes, the ones the audience has developed connections with and cares about, fade into the background for entire episodes at a time? And that the new characters that mean next to nothing to them take centre-stage for much of the latter half of the story? But that’s crazy!

If you’ve read my Higurashi review you won’t be surprised when I say that Umineko’s original sprites are not good, period. Without meaning to offend Ryukishi07, I would not have made it through any of his games without the graphics patches. Sorry. Having said that, the PS3 sprites are wonderful and fit the original designs of the characters perfectly. In addition, the voice patch features some of my favourite voice acting of all time. Beatrice’s VA in particular deserves mounds of praise; I swear I can still hear some of her lines when I close my eyes at night. Carrying on something good from Higurashi, finally, Umineko’s BGM is absolutely wonderful, though oddly enough I didn’t particularly enjoy many of the tracks that were introduced in the later episodes. As a final note, and I’m fairly sure this is the fault of the patching job, but the BGM is often so loud it covers up the voices and the sound effects (which can’t have their volume changed, by the way) do the same. You would think I could just change the settings and continue without complaint…well, you don’t yet know that the volumes change back to default with every new scene.

Summary – “While Umineko’s ups and downs may have come together to achieve a lower score than I had hoped to give it, I eagerly recommend it be read because, if you can find entertainment in what I perceived to be low points, you will discover a thoroughly enjoyable experience.” – Is what I really want to say here, and what I would have said if the story had finished after the first four episodes, or perhaps continued with the same level of quality. In truth the latter episodes depart so much from what made the former ones great that it’s practically not worth reading them. The Bottom Line is that Umineko no Naku Koro ni has a lot of potential to begin with. I really loved a lot of what it had to offer, so much that I would almost recommend reading the first 4 episodes and then looking up fan theories online. Heck, i’m genuinely angry at Umineko because i’m so glad I started reading it and yet can’t actually recommend it to anyone. The final 4 episodes? Well, let’s just say I want 50 hours of my life back.

Projected Score If Original Quality Was Maintained And The Story Handled Itself Like An Actual Mystery : 9.5/10 – Great