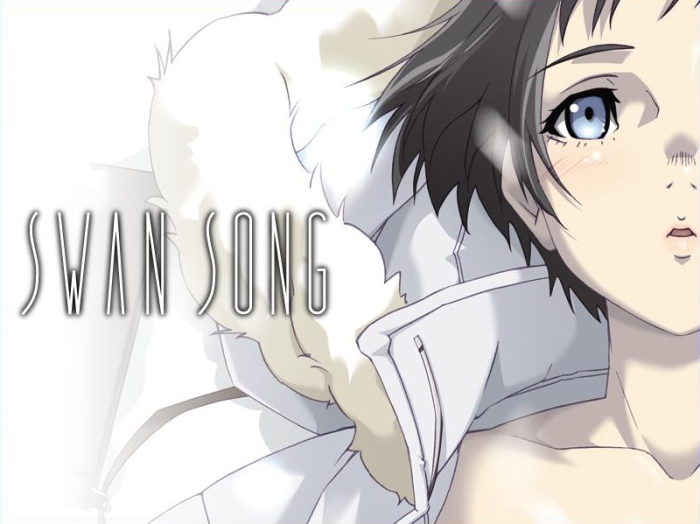 Swan Song is a story of broken people in a broken world. Developed by FlyingShine in 2005 it’s a gritty and often uncomfortable look at what could happen in the wake of a disaster that brings society to its knees, and feels even more relevant today after the disaster that shook Japan in March 2011.

This review is for the English fan translated version of the game. 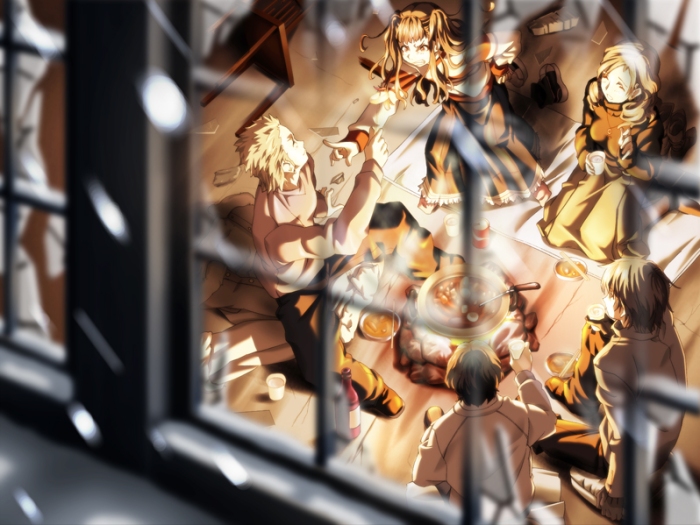 I found the plot of Swan Song highly engaging. Disaster, post-apocalyptic and survival stories are some of my favorites, and Swan Song delivered the goods here with a tale of murder, madness, and mayhem after a mega-earthquake ushers in a period of intense cold and snow. The story doesn’t shy away from the uncomfortable and we get to see right into the dark heart of a society breaking down. At the same time, our characters were already broken way before this disaster, and as such they seem to cope relatively well with the hopeless situation around them, while having a harder time grappling with the darknesses within them.

While the story had me on the edge of my seat waiting to see what would happen to our band of survivors next, it did unfortunately have a problem with pacing with frequent long, wandering monologues that start out interesting but soon become tiresome. There are also some plot points that are brought up but never fully expanded upon, for example we find out that the religious sect was informed about the earthquake beforehand, which obviously brings up a lot of questions such as why were they in particular informed, was anyone else informed, was the quake orchestrated, and so on.

Another negative point was that, contrary to my expectations, the game is actually completely linear with the exception of a few bad ends thrown in that will send you back to your previous save point. I managed to get all the way to the finale without hitting a bad end and felt a real sense of keeping these characters alive, so of course I was heartbroken when my last choice sent them down a nightmarish path. However, when I realized that on the first playthrough this is the only possible ending I felt cheated as it meant that all my choices up to that point had been inconsequential. Both endings are necessary to get a full picture of the characters and to properly wrap up the story, and it is nice to end your final playthrough on a good end, but I don’t think an enforced playing order works for a game that centers around moral choices.

A note on the fan translation: It’s clearly done by someone who understands Japanese very well, but unfortunately the translation can be a bit too literal, leading to the English sounding stilted and awkward. 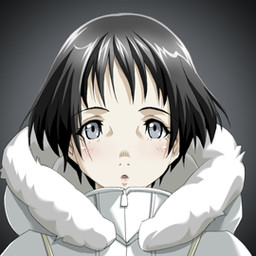 I’m going to start with Aroe. Despite not being a POV character she’s a central figure in the story, an eye of the storm around which all the violence and turbulence whirls without really seeming to touch her.

It’s veru interesting to see a mentally disabled character in a visual novel. Aroe is highly autistic, unable to grasp social conventions, and barely able to communicate, and at the same time has fascination with puzzles and things that she can order. I thought they might take a route with her where she’d either end up having some kind of super power, or of having her ‘cured’, and was glad that they didn’t. Aroe at the end of the game is pretty much the same as Aroe at the start of the game. Throughout the course of the story she acts as a focal point for other characters’ frustrations and ultimately hopes, as her innocence and natural cheerfulness is unaffected by the horrors going on around her. 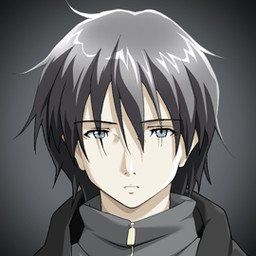 If anyone is a ‘main’ character here it’s probably Tsukasa, who the story starts with. It was difficult for me to relate to him what with him being so unemotional, and I didn’t really get into his back story which involved being a child piano prodigy and daddy issues. Despite finding out all about his past, his character in the present didn’t seem to go through much progression, and he remains a rather boring and inert character. 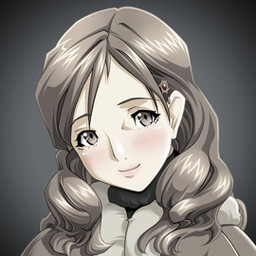 I found Yuka nice but quite boring, until fairly late on in the game when we start to hear about her self-hatred and doubts about her own intentions. These glimpses into her psyche really changed the way I felt about the character and made her far more interesting to me now that I could get my head around why she was always so meek and unemotional. 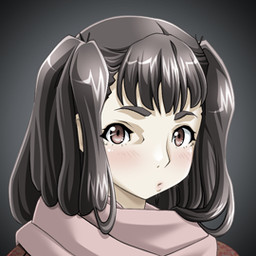 I loved Hibari-chan! She’s willful and fiery, but she’s also young and scared and hates to show it. Unfortunately though she doesn’t get very much POV time at all which is a real shame. 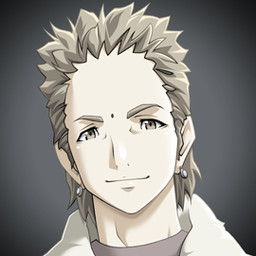 Tanomura is the ‘nice guy’ character, he’s always cheerful and positive, plus he’s a kendo expert. He’s basically the ideal guy to have with you in your band of survivors. However, he’s also the least developed character of the group, and while he does have some internal conflict about whether or not he’s cut out to be a leader, it feels quite shallow compared to what we see from the other characters. 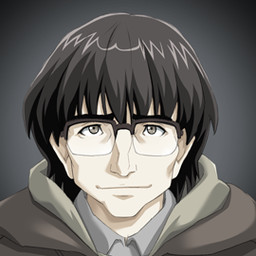 Oh, Kuwagata. His arc definitely has the most development and his character by the end is almost unrecognisable from the beginning. His change makes sense though, and through him we see how villains are born, and also face the reality that sometimes there is no redemption. 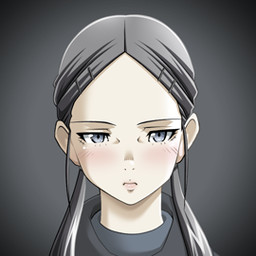 Taeko is introduced quite far into the game, and I found her character very hard to get a handle on. She seems to have multiple different sides to her personality – a cold, standoffish one, along with a naive and girlish one. And then there’s the imouto side of her that comes out in the good ending. However she’s an interesting enough addition and our focal point for getting an insight into the religious sect.

The character development as a whole was somewhat inconsistent with a huge focus on Tsukasa despite him not being particularly interesting. After making the choice to go with multiple POVs, the game would have benefited from giving them all equal time and detail.

The art and design choices used in the game are interesting. Rather than character sprites the characters faces appear in one of the corners while they are speaking, like the image below. 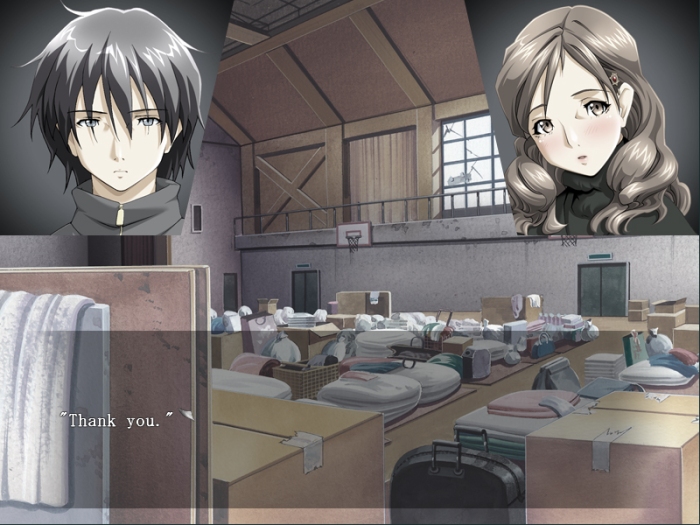 The colour palette is suitably subdued to match the tone of the game and the destroyed landscapes that are shown. There are a lot of different backgrounds displaying the snow-covered ruins of the world in lovely detail, while at the same time the game makes effective use of dark, blank space, sometimes providing just a dark screen as a background to the text. Although I wouldn’t call the artwork beautiful or even particularly eye-catching, it’s appropriate for the content of the game, and the scenes involving the characters as a group are particularly well done. 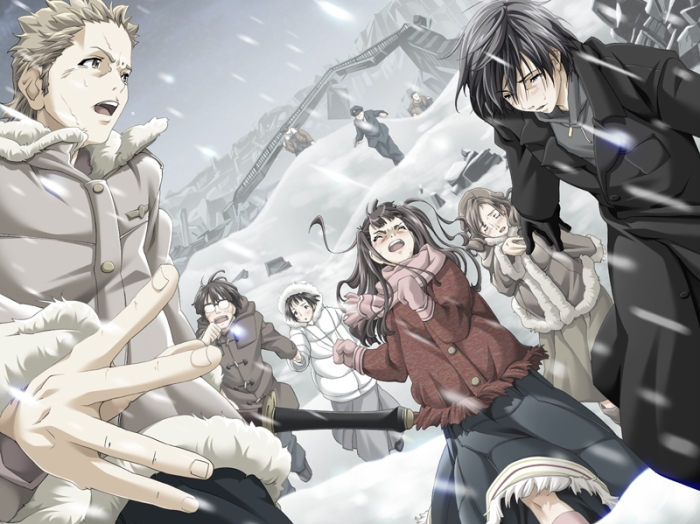 There is a lot of rape in this game, but in my opinion it’s not glorified. Of course there will be people out there who will get off on it and no doubt the developers knew this, but for me I saw them as scenes that reinforced the brutality of this world, and I found them quite horrific. While it would definitely be possible to have this game without any H scenes it added to the realism and gritty nature of the story. On the other hand, despite all the horrific descriptions gore is actually mostly avoided in the actual images, and one could argue that they should have gone the same route with the rape.

I wish there had been more consensual scenes as I found them very realistic, not afraid of showing the awkwardness that can come with sex, and thankfully lacking in the the usual over the top screaming found in most eroge. My favourite scenes were with Tanomura and Hibari as they were genuinely sweet and romantic while being sexy at the same time.

Music is very sparse and most of the sound involves background noises such as howling wind and crackling fires which enhances the sense of isolation. The music that is there is well done, and I particularly liked the main violin theme. I think they should have included some piano pieces though, given how prominent the instrument was in the story.

The voice acting was all fine and suited the characters and their personalities. Some of the voices could end up quite dull and monotonous, such as Tsukasa and Yuka, but that’s due to the unemotional nature of their characters rather than any failing of the seiyuu. And Aroe was super annoying, but that’s also how she’s supposed to be. 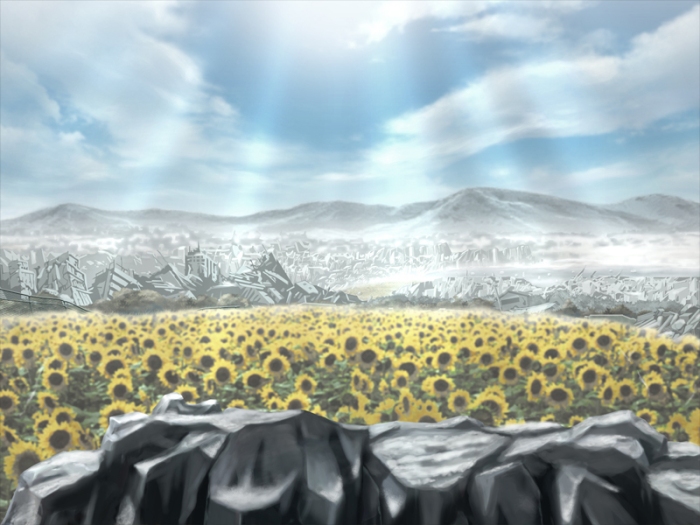 This game put me through the wringer together with the characters, and provided a bleak but engaging story of survival in the wake of disaster. It’s excellently done, although let down by some uneven pacing and design choices. I think it’s something that could act as a gateway to visual novels for anyone who is already into dark stories.