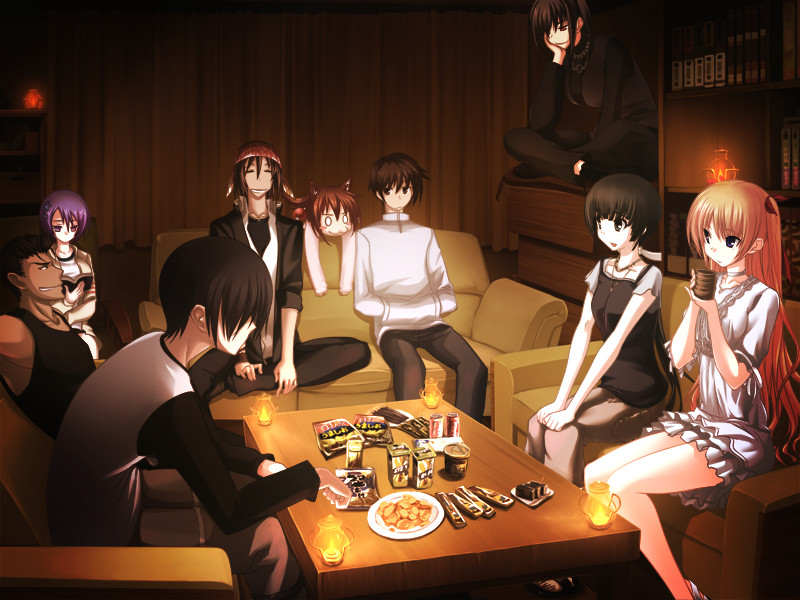 Welcome to the Fuwanovel VNTS, where we shamelessly copy the work of one illustrious 4chan /jp/ member in collating translation progress and add minor dabs of value through corrections and additions. Entries with updates this week in bold. This week’s picture is from Majikoi.

「So yeah, not much Shinimasu progress. I did at least finish and turn in my math assignment, so I guess I don’t have anything to do any more. For months. Though I should probably get up to date with the actual maths lectures and practise or something. Ugh. Unfortunately for me though, I have free time but not free rein over my system, which continues to meme me with headaches when looking downward as well as what is probably a pulled chest muscle that has been assailing me for like four days now. Also, the heartburn hasn’t resolved with 14 days of omeprazole, so technically I should probably book a doctor’s appointment. Anyway, my life quality is somewhat reduced right now, but whatever, I’ll live.

This phase of the tl project is actually the most hellish though, because I have to actually pick final versions of lines. Sometimes this means synthesizing the editor’s input and my own due to me wanting to keep a nuance or whatever, which means rewriting a section, which means having to consider the flow for a group of like 6 lines that are difficult to do right. Maybe I should just do a first pass and copy over all the lines that are fine… oh well. I’ll be tracking this edit check under the QC category for porygon’s site out of lack of options because I need the progress tracker numbers almost as much as I physically need to retweet 2d porn on my twitter account.

Majikoi’s official localization has a voice patch out already, which is basically just the voice pack from the Japanese version as far as I can tell. This one appears genuinely fanmade rather than unofficially official. I guess this is just how it’s going to be sometimes, eh? Patching in voices for what, 70% of the characters or whatever due to licensing fees sure is something. I just know some normie’s going to play this without knowing about the patch at all… Anyway, I’d download it quick were I you since these things have a tendency to get lost in the aether before long. I wonder if I should get the thing and check how much better the translation is… given that the fan translation was pretty stiff.

Kakugo Translations has updated their patch for Knot Fiction to add better word wrapping and a better font, thanks to technical assistance by Kebab_Jesus and an anon. It looks a lot better to me. I literally joined their server and posted a semi shitpost 2 minute brain dump on how I would have technologically organized linebreaks in their #feedback channel as the first message; turns out someone else was willing to actually follow through!

Gekkou no carnevale, that Nitro+ game with the unfavorable review by Gare and mafia stuff, had a patch released on the 25th by resident community madman George Henry Shaft, known for his… inspired essays on Cross Channel and other subjects, probably-worse-than-Ixrec translation of that same visual novel, and general eccentricity. Probably not that good, but it’s what you’re getting.

Bustafellows is announced by Pqube, not Aksys. Truly a revolution. But will they be better quality than Aksys? Only time, or lack of it available for translation, will tell.

Apart from a progress update, the Manakashi project also released a trailer with the partial translation as it stands. Enjoy, or something.」