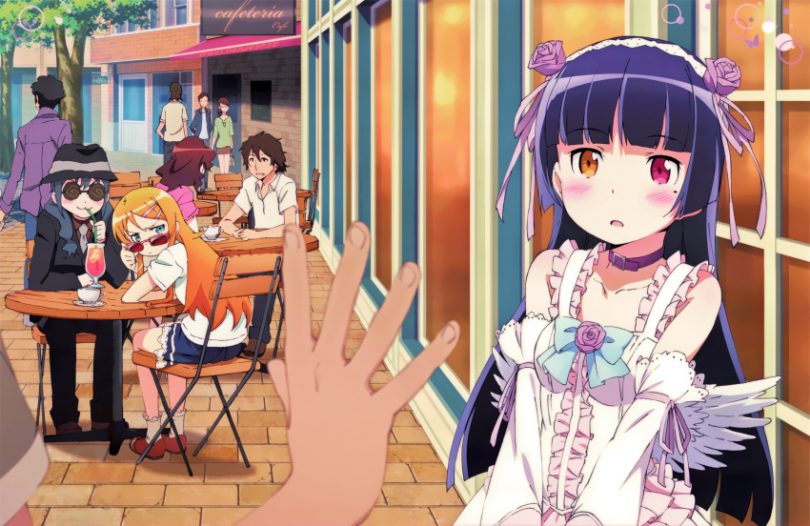 Welcome to the Fuwanovel VNTS, where we shamelessly copy the work of one illustrious 4chan /jp/ member in collating translation progress and add minor dabs of value through corrections and additions. Entries with updates this week in bold. This week’s picture is from Oreimo Tsuzuku, which at last got its second part’s translation released this week. But wait, there’s more! I’m trying out a spicy new commentary contributor this week to uhh, celebrate the new year. Maybe. Apart from unimportant shit like being a professional translator and working on fan translating akagoei at the moment, he’s completed a grand slam of Discord server bans: the Yosuga no Sora translation discord, Fuwanovel (wait, Zaka what are you doing…), and the old r/vns discord that is no longer the official r/vns discord. I’ve only gotten banned from one of these (Yosuga no Sora for being impolite about their probable translation quality), so clearly he is much better a man than I.

「Hi everyone, the heartburn issue I’ve been having is being as meme as always but otherwise I’m doing okay I guess. The muscle pull stuff seems to have mostly subsided? Also I think my not-quite-headache shit is a heartburn med side effect, I hate my life. Shinimasu progress is based on like two nights of sort-of-working, I seem to be able to do 100 edit-check lines a session which is good I guess. The porygon tool actually tracks these as “QC” and I don’t know why /jp/ VNTS couldn’t see it and add it, but whatever. Speaking of the tool, unlike Mr. Professional Localizer below, the auto-updated progress numbers actually make me feel really good. It really feels like I’m making big, tangible progress toward something when I see that number shoot up. And basically nobody is pressuring me, since I’m working on an obscure doujinge. Best of both worlds!

Oreimo Tsuzuku’s disc 2 translation patch is out at last. Since we all own PSP consoles and it’s definitely not like even its successor console the Vita has been officially retired, there’s no guarantee or support for playing it on emulators. It will probably work though. They probably just don’t like doing tech support. Well, it’s also hard to buy it legally without the console maybe. I don’t know and I don’t care. The only piece of oreimo-related fiction I have consumed is Life Consultation After 10 Years (Juunengo no Jinsei Soudan), which was actually kind of fun I guess. Okay, we can check off recommend ero-doujinshi in column on the bucket list now. Great.

I notice that Reflection Blue has a “old tl rework” section now; I don’t know when it was added. I had to dig a bit but I found this quote on the TL blog when looking for the reason:

“Summer Pockets is a huge game, and at this point four translators have worked on it over the course of two years, so some smoothing and adjusting for the sake of consistency (in terms of character voice, running gags, in-universe terminology… a lot of things really) is definitely in order.”

So that’s all well and good, I guess. I’m all for trying to up your translation’s quality, though the tl speed and multiple translators currently working on ref blue work against that, so well I suppose that is a strange contrast. Ah well. There’s also some kind of malicious redirect that some people that aren’t me get served by the blog occasionally; no idea who it happens to and why, they don’t know why either. I use noscript (too lazy to set up matrix), so I should be comparably safe from anything too dumb happening to me anyway. Oh and after refblue they’re set to work on Kud Wafter apparently. Respectable team in terms of output so far, at least… we’ll see when whatever translator is pulling most of the slack dies and takes the group with them, I guess.

Some random released a patch for what I assume is his waifu Margit (+ harem route) in Majikoi A-5. The vndb link literally uses discord as a CDN for the image it was distributed as, and I’m not sure if there’s any other uploads. Get it while it still exists, if you want it, I guess.

Closed Game is mostly notable for the long tease JAST went for with a very vague hint during an old trailer. At last, they have revealed that they are working not on something interesting like Gun-Katana but a big nukige I don’t care about. Rejoice, coomers!

Nekonyan is showing Actual Progress on dracu-riot, could it be that it will actually be released??????? It always was a plausible next-month release and nobody quite knew what the hell was going on with Yuzusoft and Sekai Project bar hints of Yuzu parting with Sekai on bad terms — but I guess Nekonyan, which seems to actually be not entirely incompetent, is probably going to release it this year at last. Probably. Also some porting for clover day’s or whatever.」

Hi there, person working on Akatsuki’s translation here. Thank you Zaka for allowing me to comment on this segment. I’ll make sure to not harm your family for giving me this honor (check your mail in a week thanks in advance). The progress on Akatsuki is going fine, since I now started working on Tae, the mentally challenged girl of the roster. Her route is not the best and I’m saving the good stuff for last, so there you go. So many people in the Akatsuki discord server like her though, can you guys please stop liking the mentally impaired girl? Ree.

Anyway, Haruka no Uruwashi advancing yet another meaningful % number, very epic. I know the editor and she’s pretty good so yeah it’ll probably end up being good or something.

Aiyoku’s progress on TLC went up an astonishing 0.7% (surprised noises), at this rate rance might come sooner, you may laugh now. Isn’t it funny how many teams detail their progress to the very limit with percentages, like, it clearly creates more pressure onto themselves because the people following them and the very team will feel like they need to do more or less per week so they don’t feel like shit and yada yada.

I’d comment on the non-existent progress of Yosuga no Sora but since I’ve been banned from their server for saying “pedophiles bad” then I guess we’ll never know the truth of when will they release their masterpiece of a translation and how wonderfully their Chinese TLC is dealing with the intricacies of learning English while also tlcing it (I wish I was joking about his).

Oh yeah, the oreimo patch for the second game was released. Literally who cares at this point. Moving on, Mangalamer with yet another rance stalemate (surprised Pikachu face). Whoa who would’ve expected this. Epic dab, stay mad eops.

Some random translated and released a Majikoi A-5 patch with only two routes. I don’t know if it’s good or bad but as long as it’s English it’s a masterpiece, amirite. OMEGA. I must admit that appending the patch to an image file was a very big brain move and I respect the shit out of that. Mad props brother.

I know Sharin hasn’t had updates in ages, but calling it now, it’ll be delayed for 5 more months or something due to ‘quality assurance assurances.’ Trust me guys, I’m a localizer after all.

I don’t feel like updating on the other companies because I don’t feel arsed enough. Wake me up when something of notice happens with them. 以上です