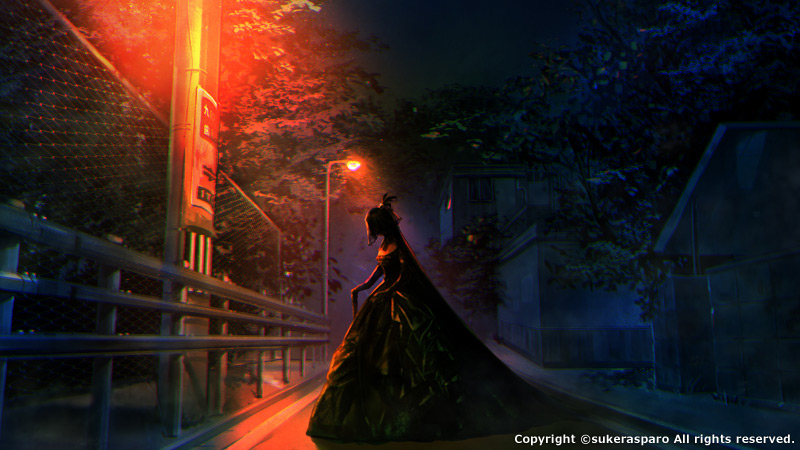 This week’s picture is from Kudan no Folklore (Curse of Kudan), because if I have a bias it sure is for spooky yuri mysteries.

Abaddon: Princess of the Decay – Demo out, February 12th release

「I blame the hearthstone duels competition yesterday taking so long for VNTS being late. If nothing else, though, I have several things /jp/ doesn’t — it somehow missed Kudan’s release, and I’ve got an exclusive update on Manakashi, which I’ve chosen to add to the list this week.

So what happened this week? Well first of all J-List head honcho Peter Payne said he was translating the “next game” by the “writer of My Girlfriend Is The President”. But what does it mean? “Next game” could be the next in chronological order, or an upcoming game that isn’t announced yet. There are three writers listed on vndb for osadai. If we choose to believe he means “next chronologically”, then Onigokko or Tokyo Hero Project are likely. If not, congratulations, we have no idea! You may now lower your dongers. For some mysterious reason, however, I suspect it will be Onigokko. Maybe I just had some bad Filmjölk and am hallucinating though.

Kudan no Folklore, dubbed The Curse of Kudan for its quad-language FHD rerelease, is mostly focused on the plot but “the yuri permeates throughout” according to esteemed translator and Fuwanovel member Meru. Should be a decent translation, Meru’s good enough. We do need more japanese horror games, nice to see one out there. Now where’s Yoru, Tomosu? …I digress, though wow that vndb summary totally leaves out the kinda important thing where the school falls into disrepair and becomes haunted with the ghosts telling nearby residents to GIVE BACK [the items]. Anyway…

Manakashi no Yuri wa Akaku Somaru, dubbed True Love’s Lily Dyes Red by the translator, has been active for a bit but not really produced any easily reportable number before. Talking to the leader and main translator Yumi, she raised the extremely valid question “what is progress anyway?”. I think this depends a lot on translator methods, but she’s like me in that she tends to go back and redo lines a lot, which means getting no new “lines” might nevertheless mean progress in a less legible direction. Over time I’ve gotten a bit more on the “discrete passes” side of the equation; it helps get things done, and you can always make another pass later… but that doesn’t mean I don’t load up the scripts and read the last few lines and find it unacceptable and spend 30 minutes redoing it sometimes.

I have more or less joined the team as an occasional advisor for hard lines, so you can consider me biased in any evaluations I make. I won’t be doing a full TLC run or anything though, 17k lines is a bit much when I get through like 70 an hour on Shinimasu.

Suzukuri Karin-chan is a project I have mostly interfaced with through one of the translators, an eccentric Vietnamese individual so annoying in constantly asking for translation help and spamming progress updates and raging about someone DMCAing his gameplay video that he’s banned from two Discords I know of, including the Fuwanovel one (it’s not easy to get banned from Fuwanovel!). Neither his Japanese nor his English ability is very good, though the English part is probably the worst in comparison. He did say he’s only doing building descriptions and stuff and someone else was handling the main story, but even letting a guy his caliber onto you team should be a red flag. Skip with the force of a thousand suns.

I read the original version of Kimihane, localized as Wanting Wings, a while ago and enjoyed it. I didn’t find it amazing, but the expanded version might be enough to change my mind? — some of the routes are… kind of dumb, even though the last one was pretty cool (expanding it might even make it worse in my eyes unless handled well… we’ll see). Either way, it’s being translated by the translator of KnS2 / Sorcery Jokers / Kindred Spirits, Maria / bad end, who I’d say is fairly good. Expecting a good release. That said it’s funny that they’re marketing it as a double pack when the “sequel” literally has all of the “prequel” in it.

Hata wishes to add that QC has started on the Akagoei prologue, a prologue demo might be released, and that he’s done 1 out of 7 scripts and wants to be done with QC this week. Lovely individual.

Oh, and Sekai Project finally released the otome version? spinoff? of that memege about dating insects or something. I think I read a review saying it was even worse than the male-mc version, which is certainly impressive. Maybe buy it if you like really bad games? And/or if someone you trust says it’s worth it, I guess.」