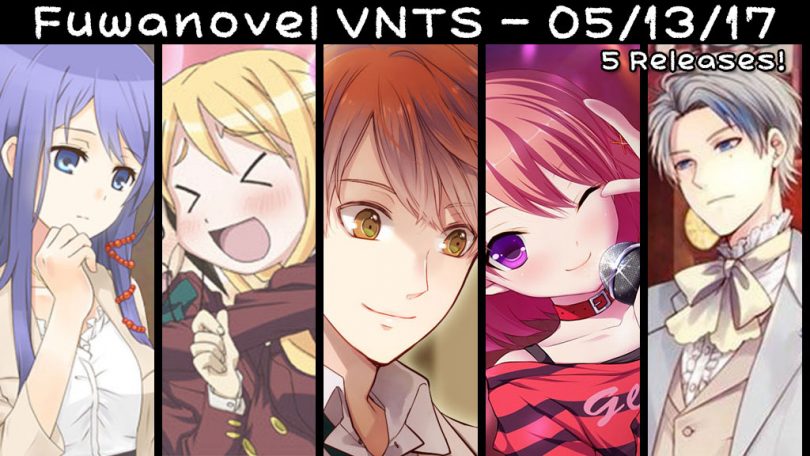 This week’s header image comes from our five releases (including Hatsukoi 1/1, the first major fan patch release in a long time, which you can check out here).

From The Team:  Hey everyone, Tay is grueling through exams so here I am again! We have a few good releases this week, and one notable clunker. We like to remain mostly impartial here, but it’s hard to this week. Just… maybe don’t buy Taisho x Alice. If you have money burning a hole in your pocket and an urge to get an otome game, Period Cube and Nightshade released recently, Hakuoki: Kyoto Winds is releasing very soon, and Silent Voices is a promising-looking project on Kickstarter.

Decay’s MusingsHow’s everyone’s week been? It’s been a pretty good week for me. I’ve been enjoying me some Nier Automata, which I finally picked up. I won’t get too deeply into it here, but man, that is a hell of a game. Even going in after seeing it get hyped to hell and back, it still manages to seriously impress me. That game’s entire aesthetic feels tailor made for me.

But visual novels! We’ve been getting plenty of them and I’ve been reading not a lot of them! I started up Eden of Grisaia. I do plan on reading that one through sooner rather than later, but I have to say that the prologue didn’t really pull me in. Maybe it’s the pacing that’s throwing me off, because of how it starts. I’ve only read it for like an hour though, so don’t take my words too seriously. I’m looking forward to playing more of it soon.

I’ve actually put more time into Hatsukoi 1/1 than Grisaia, which, well, I don’t have much of an excuse for except maybe I’m more in the mood for something brainless. It’s a pretty good moege. Some people complain about the protagonist, but he’s pretty much fine in the common route. I think some people put too much stock into what their ideal vision of what a “badass” is and what that in every VN. But my view on what is and isn’t “badass” seems to be pretty different from most of the community. I digress. Hatsukoi 1/1’s protagonist is indecisive, a pushover, and colossally moronic, but I don’t really care? At least he has more of a presence than most moege protagonists. I hear he gets worse during the routes, and I hate myself some ultra-donkans, which this guy seems to be, so we’ll see how it goes then.

The other characters are pretty great, though. This kind of VN heavily depends on the strength of its cast, and I really enjoy basically all of the heroines except for the ultra boring and stereotypical student council president. The banter is amusing and everyone is charming in their own way. Me and my wife Runa will lead the revolution together. Down with the man!

I’ve expressed some gripes with the translation in the past, and those gripes still remain. They’re gripes even the translator himself has shared on his blog. The gist of it is that it’s accurate, but has some pretty flawed English writing, leading to a very stiff and unnatural feel. Among the list of problems include an over reliance on stock phrases (including the dreaded “it can’t be helped”), an adherence to the Japanese sentence structure leading characters to say things in weird ways, and nothing but the most standard translations leading to very samey dialogue, weakening the otherwise distinct personalities the characters possess. In short, it’s a very literal translation. If that bothers you, then maybe wait for whatever changes Triplicate plans on eventually making to it. Because the thing is, while it has those issues, it still contains a firm basis to work from and has the potential to become a great translation if it is given the proper attention and care.

I think maybe I’ll start an editing blog like all the cool kids are doing and post some of my editing thoughts there. Other people like Fred the Barber are doing blogs about general good editing practices, while maybe I’d like to dig deep into specific common issues I’ve run into and possible ways they could be handled. I don’t know if I’ll be doing this anytime soon, it’s just a thought I had. One item among many on the long-ass todo list.

Anyway, that’s enough out of me. Have a good week, everyone!

TAYsteful Thoughts™Clinical exams are just about over. Thank goodness. Life’s been absolutely nuts for me, how about you guys? At about four in the morning, as I finished my last exam and stumbled out the door, I saw that Decay was still up and working on VNTS. He put in a lot of time and effort this week combing through the tables and sprucing them up. I was able to step in and finish the last few bits of the post for him, but if any of you have a chance, let’s give him a big ‘thank you’ for all of his work.

I’m traveling this week, so communication will be spotty. If you have an emergency-level issue, Skype is still the best option. Otherwise I’ll get back to you around Thursday-Friday. Have a good week, everybody!