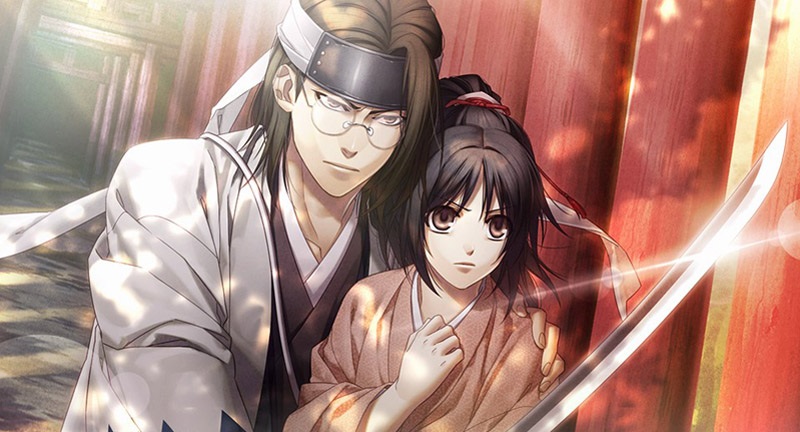 This week’s header image comes Hakuoki: Kyoto Winds, one of our three releases this week.

From The Team:  Hello everyone! Sorry about the delay on this one, but we wanted to make sure we caught all the big news from this weekend’s convention, Anime Central. And while we didn’t get a ton of new VN announcements, there was still some interesting news nonetheless!

Not the most action-packed con we’ve seen, but hopefully there was still something to excite you here. The next major convention will be Anime Expo, starting July 1st. That’s the biggest con of the year, where all the major players roll out their biggest announcements. Even JAST USA, believe it or not.

The fact that the chuusotsu kickstarter uses endorsements by Moogy, Kastel, and Hadler fills me with mirth. It’s not like I find it unpersuasive myself, but that’s some serious inside baseball unless you’re already a VN community elitist. Maybe nobody else read it? I actually asked two of my lower power level weeb friends, and they didn’t have a clue about anyone but Moogy, and not that much about him either.

Anyway, at 8 days left it looks like it’s getting funded. I wonder who handled the character descriptions, because they feel a bit… off. I do tend to conflate PR writing with translating fiction a bit too much, and the actual ingame screnshots look better, at least. Having GareJei on as their editor does reassure me somewhat, but not completely… ah well.

We knew kyonyuu fantasy gaiden was coming, but we were not quite aware that “gaiden” was going to be localized as “sideboob story”. I feel unable to object to this title. It’s more or less a fully-fledged sequel to the first from what I’ve heard, so I hope those of you with ballooning aspirations will enjoy.

Pissing Lolis’ release delay threw many a pee fetishist in despair, and I guess some other people might have been minorly miffed as well. They seem to be having trouble getting steam achievements or something to work, and I think I saw some people had gotten their hard copies already, so this might be one of those rare cases when the physical goods arrive first from a Kickstarter. Huh.

Sweet Young Bride… I enjoyed the CG set. I even saved some pics. Maybe I should actually try it. But one man can only finish so many times in a day, and then the nukige becomes useless… and the experience gets all chopped up as a result. So maybe not, huh.

…yeah, I should just continue Hatsusaku before VA decides to make it a kusoge or something :)」

Decay’s MusingsWhew… One last Decay-only VNTS until Tay makes his triumphant return next week (hopefully). Last week wasn’t purely Decay-only. I screwed up by not properly saving my work. And then Tay came in out of the blue like a god bestowing his divine blessing upon my unworthy self, and while at the airport, saved my ass by offering to redo what was lost so I could actually get some sleep. And then he made a boss header image while he was at it. No such luck for me this week, though, so I hope you enjoy the random CG I found.

So Anime Central happened. This was a pretty weak ACEN all-round in my opinion, though it makes sense when you look at where all the major companies are at this year. SP and MG made some huge announcements last year and it seems like they’re still trying to churn through their extensive backlogs. I wouldn’t be surprised if this year ends with fewer announcements overall. In exchange, we’re getting some real huge game releases that have been in the works for a while, such as Dies irae and Baldr Sky (presumably). I still suspect we may still get a few big bombs before the convention season is over, though, such as perhaps another Rance game.

Sekai Project’s announcement of a dedicated Otome/BL brand seems a little weird? Like, you know how a lot of people felt when Sekai Project set up a separate brand for 18+ releases, that it felt like the niche they were most interested in was being relegated to an “other” status that ended up neglected? That’s kind of like how some otome/BL fans feel right now. There’s still potential for this to end up being a positive move overall if Sekai Project play their cards right, and I know for a fact that they have some dedicated people over there who care a lot about the otome/BL scene, so I’m hopeful that this will end well. I will say that the very first thing that popped up in my mind when I saw their new mascot was “Uh, that looks like an eroge heroine,” so that’s not a great start. They need to be more savvy than that.

And for MangaGamer’s announcements, all I have to say is that I’m sad Tay has been offline all day. I really wanted to see how he’d react to this duo of titles, but all my bait messages have gone unanswered :(.