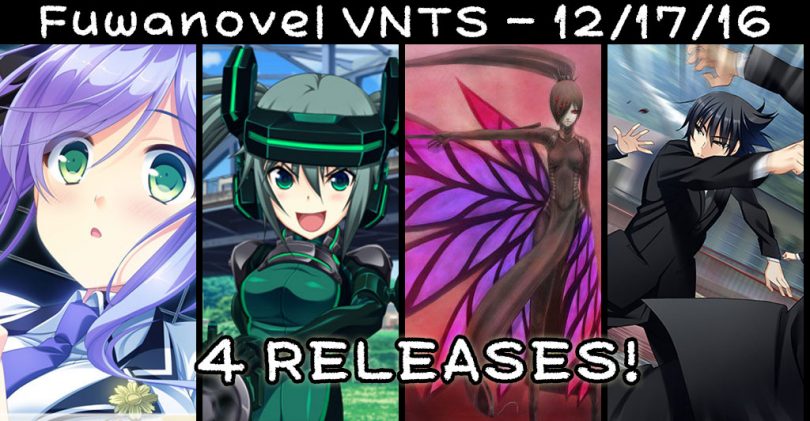 From The Team:  It’s a good week to be a VN player. We got two fan translation patches: Majikoi A2 got the drop, as did Denwalts’ secret project (turns out it was 11eyes); and two licensed releases in the forms of LoveKami by MoeNovel, and The Melody of Grisaia by Front Wing. Lots of other interesting updates this week, too, so don’t scroll past them all on your way to the releases!

Oh, and a pro tip before we get to the game updates: On top of the four new releases listed above, MangaGamer launched a few new game editions on their site: Highschool Romance: Magi Trials Deluxe Edition; OZMAFIA!! Limited Edition (hardcopy); and a SRPG called Moékuri.

Also note that MangaGamer has some “new” (read: special) releases of some old releases that went on sale this week:

These tables were not regularly posted during 2016, but I’m contemplating making them a regular feature of 2017 VNTS posts. Please sound off in the comments if that would be to your liking.

Decay’s MusingsHey everyone! Tay is trying a new look for the commentary section. I’m not sure what to think about it yet. I’m pretty aesthetically challenged so it’s pretty much all the same to me. Maybe it looks good? Probably.

Dies irae is off to a steady start. I’m guessing there isn’t the fervor around it Light was expecting, judging from the lofty stretch goals their prefundia had. I suspect they thought this was going to be an easy Kickstarter they could just coast through. I mean, Dies irae is beloved (in Japan)! It’s hugely popular (in Japan)! It already had one very successful crowdfunding campaign (in Japan)! How could things go wrong? Well, for starters, this isn’t Japan.

I’ve already talked about this before and I don’t mean to beat a dead horse, but the way this launched seems pretty emblematic of that kind of thought process. From what it seems like, the kickstarter being launched on the 15th was a huge surprise for everyone, including the people who are supposed to organize and promote it. One hand doesn’t know what the other is doing in this case. The lackluster tiers are symptoms of that. I hope they’re able to add the tiers the organizers were apparently seeking to add. They definitely need more ways for the fans to spend lots of money on this. In many Kickstarters, it’s often the case where 25-30% of the funding comes from 5% of the backers. Without more expensive and appealing tiers, it will be a long slog to the finish line.

It’s not all bad. They’re honestly not at a bad percent right now if they’re content with just reaching their base goal in the last few days of the campaign, which is what I suspect will happen. At the very least, it seems pretty certain that we will at least get DI itself. The stretch goals, including the Vita port, the acclaimed fandisc, and the new story they wish to write, are remain highly improbable. Even if they reduce how much they’re asking for those goals, it doesn’t seem likely they’ll reach them.

They need to do two things that could help them actually get there: 1) Guarantee the Vita version. This is a bit of a gamble, they were likely already lowballing the cost of a Vita port with their +$40k stretch goal, but the Vita brigade isn’t going to budge until there’s a guarantee. I think they can reach that goal if the Vita brigade shows their support, but probably not if they don’t. 2) Announce what that all-new story they’re planning actually is, and advertise it to Japanese fans. Is it an after-story? A side-story? A Rusalka route? Depending on what it is (especially if it’s a Rusalka route), Japanese fans could come out in force to get their extra content. DI fans in Japan are devoted enough, for sure.

Anyway, enough Dies for now. The 15th not only had the surprise launch of the DI kickstarter, but the surprise release of two fan translations! Fan translations in 2016, crazy, I know. I actually went back and played a little bit more of Majikoi S a couple weeks ago. I dunno, it doesn’t hold the same magic the first game did (and I was never a super fan of that, either). What little I played of A-1 I actually liked more, however, so maybe I should just skip S and read A-1 and the new A-2 patch. Eh, I have time, the rest of the A games aren’t going to be translated any time soon.

11eyes also came out of nowhere, kinda. Denwatls did give us a one week timeframe. And I actually did peg 11eyes as a possibility based on the vague hints they gave. Opinions on the game itself seem pretty torn. Some believe it to be mediocre, others I’ve talked to really loved it. The fan translation does a pretty okay job at delivering its chuuni-ness to us, thankfully. The translation is a little overwrought, and I’ve seen another translator point out one or two translation errors, but nothing especially major and it’s definitely a good deal above average for a fan translation. So props to Denwatls for putting out a quality patch in an era where such patches are admittedly far and few between. Maybe I’ll find time to read it before DI ruins all other chuuni titles for me.

So pick your flavor, everyone. We’ve got moeshit, chuunishit, boobshit, and… whatever that Grisaia thing is. Edgyshit? It’s quite the spread this week. Enjoy, and see you all next week.

TAYsteful Thoughts™Before you make your reports in the comment section, I am aware of the AJAX table #7 error popup some of you are getting when you visit the VNTS post page. This is something we have to deal with, on occasion, and I’ve got a friend looking into it. For now, unfortunately, we’ll just have to click away the popups as they arise.

Had a helpful chat with Aizen of Luna TL last week and I came away with some useful tips in how to follow their TL updates. You may have seen this in the game tables, but I’ll reproduce it here for the rest of us: How to Track Luna TL Project Updates:

Did you guys notice there’s a limited hardcopy version of OZMAFIA!! on MangaGamer’s site? I still haven’t had a chance to play it. Oh, and speaking of interesting Otome games, you know what else I want to try? Rose of Winter is now on iOS and I’m saving up my pennies to get it. (Despite all the hate I get for otome-stuff, I really don’t play much of it. I figure I should probably dabble a bit before I dive into Bad Apple Wars whenever it finally comes out.)