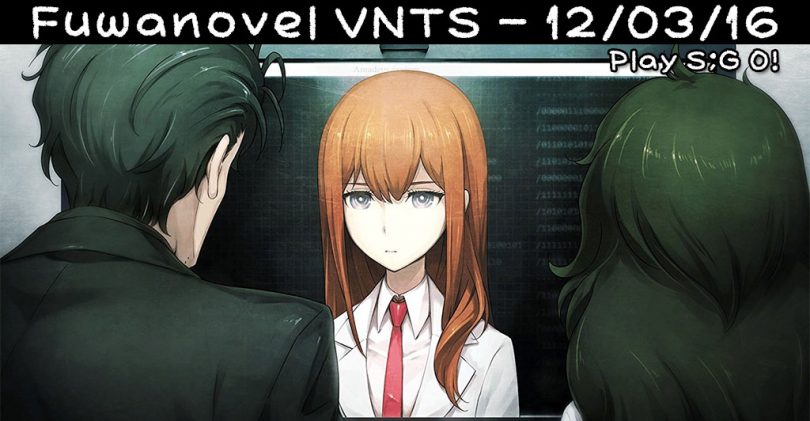 This week’s header image comes from one of last week’s releases: Steins;Gate 0 (PQube) which can be played on the PS4 or PS Vita! It’s really good. If you haven’t read our review, yet, you probably should!

From The Team:  Was it just me, or did November fly by at warp speed? In any case, Happy December, everyone. Drive safely in the snow (if you live in an area with snow, that is). So, before we get started, I’ve got two things to mention: 1) You should check out our Steins;Gate 0 review, written by Fred the Barber, over on the Reviews hub.

Next, #2) Tomorrow (Sunday 12/4) is my catch-up day where I’ll be doing a crap-ton of Fuwanovel work. This includes updating the releases and dropped tables which occassionally grace our VNTS posts. If you need these tables in the immediate future, look for a post going up tomorrow which should include them. Otherwise, they should be here in VNTS next week.

Much thanks to Decay who did almost all of the tables last night. I was caught up in some RL issues, and he stepped in to save the day. Gratzi! – Tay

Whoops, we forgot to add one thing to the table this week! My sincerest apologies.

「Zaka did write something! It’ll appear here a little later today, though.」

Hello! So I guess we’re finally getting the Dies Irae Kickstarter soon. It’s pretty cool to see another long-desired VN translation come to fruition. Five or so more months and we’ll all be able to see what all the Japanese readers have raved about over the years, huh? I’m a little concerned that it’s been overhyped at this point. I’m pretty much immune to that stuff, but I fear other people may walk away disappointed if it’s not the greatest VN they’ve ever played. If you want to de-hype yourself a little, read a short bit of criticism from one of the game’s translators and biggest fans, Conjueror. As popular as the game has become, it’s still an imperfect work, and I really look forward to digging into it and finding out how for myself in May.

The Prefundia itself looks great, though I worry the goal might be too high. I was honestly expecting something a little more modest. I think it has a very good chance of making it, but it might not be as much of a smash success as they’re hoping for, and some of its stretch goals could be out of reach. I’d love to be wrong, but I’ve seen enough western VN fans who never heard of Dies Irae to know that its popularity among Japanese readers doesn’t necessarily translate to popularity among the general western audience. Yeah, sure, it’s well-known on Fuwanovel, 4chan, Reddit, etc, but it’s easy to forget that all the VN communities out there combined only make up a small portion of the market.

Someone actually responded to our tweet about the prefundia yesterday. They’re a VN fan, they backed Sharin no Kuni and RT stuff from Fruitbat Factory and Sekai Project. They follow our account and some similar ones. And they also never even heard of Dies Irae before until they saw our tweet. That doesn’t surprise me, though, because I’ve seen others just like that. The truth is, the people who hype DI are just a small subset of our community. And our community is a small subset of the overall VN-buying market. If the people running the campaign are relying on that small subset of a small subset to carry them to victory, they’re going to have a rough time. They’ll have to work hard for this one.

The fact that they basically favorably addressed every single common concern for Kickstarter projects right out of the gate helps a huge amount. It really does feel like they thought of everything. It all seems like common sense at first glance, but this kind of knowledge of the western community doesn’t come natural to all Japanese companies. Light and Regista have found some really smart, clued-in people steer this project. That’s what I felt as soon as we heard who they hired to translate it, and I feel extra strongly about that now. They clearly know what they’re doing, so maybe my concerns are unfounded.

The one other criticism I’d levy is that the reward tiers don’t seem great. SnK spoiled us with amazing tiers and I won’t expect a repeat, but a mountain of shikishi isn’t the most inspiring reward. I understand that shikishi are kind of Light’s thing, but still. Something else to mix things up might help, especially at that hole between $65 and $300 people have been talking about.

I finally found the time to read a VN, and it’s Steins;Gate 0. Okay, yeah, I said last week that wasn’t going to happen. I couldn’t help myself though, and actually borrowed my brother’s PS4. I’m hopeless. I haven’t obtained any of the endings yet, but as a huge S;G fan what I’ll say to the other S;G fans out there is PLAY THIS GAME. Seriously. I don’t know if it tops the original, but it is definitely a worthy follow-up. I was afraid that it would feel like an extraneous addition to the series, a cheap tie-in to milk fans. It’s true that it doesn’t feel like the creators envisioned 90% of the S;G0 story when writing the original game, but it’s incredibly well made and they managed to insert it into the fiction intelligently. The end result is that it absolutely feels essential. I almost want to suggest to people playing the original for the first time to NOT read the final true end in S;G until after reading S;G0. Is that unreasonable? Probably.

Well, that’s all from me. Hopefully by this time next week I’ll have S;G0 off my plate just in time for Himawari. There’s never been a better time to be an English-reading VN fan. Until next time, folks!

Apologies for the delay, everybody! Much thanks to Decay who did all the tables except Fan TL for me last night!