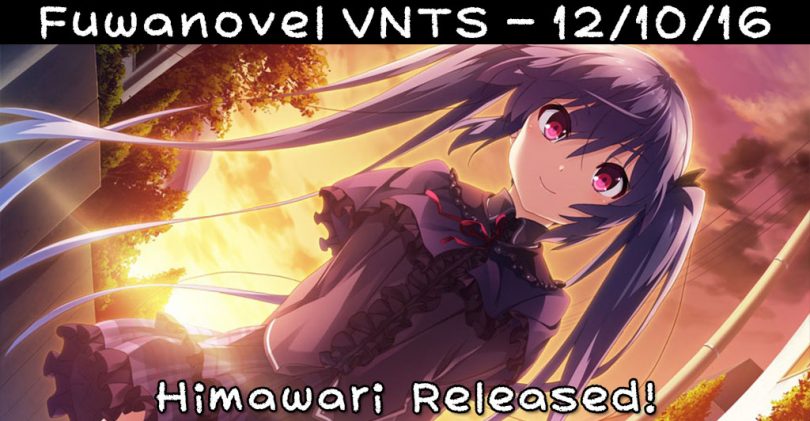 This week’s header image comes from our lone release: Himawari -a pebble in the sky-! (MangaGamer) which you can check out here!

From The Team:  Well, Himawari‘s out. Judging on the amount of messages I’ve received about it, I’d say a lot of people are interested in this one. If you want to check out the game, you can do so (and buy it) here. Decay’s trying to play it, for one. And then he spent a bunch of time tinkering with his config file. And then, just as he sat back down to play it, I got on Skype and started VNTS. Taypls.

12/10/2016 Addendum: A few Luna TL updates are incorrectly listed in the table below. They’ll be fixed next week. Here are the correct values: 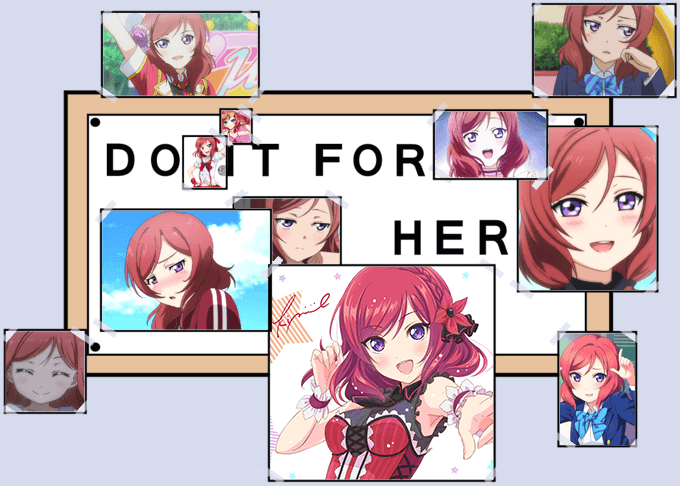 Once upon a time there was a Dutch weeb named Asonn. I mean, an actual weeb, he literally owned a katana what the fuck. After a series of poor life decisions such as being born, reading Katawa Shoujo, joining Fuwanovel, and so on, Zaka became friends with him.

Asonn had a visual novel dream: to translate Koiseyo! Imouto Banchou. Unfortunately that went down the shitter because he’s way too lazy, so now he’s the head of a translation project for a nukige where you make love to some tsundere redhead idol. In the end though, despite us trying so hard and getting to 60% translated, Deccy didn’t even see fit to add us to the actual tables. I cry every time.

Anyway, the Maki Fes project is going to be interesting, and not just because Maki is fully voiced and partially animated!

First of all, to try to keep the work required manageable for everyone involved we split the 8 ~300-line h scenes between 7 translators; one translator per scene, plus this one guy said he was gonna do two. 300 lines might not seem like much, but I believe two people have already noped out and me and Asonn are both not done with our scripts. I’m the one with the lowest linecount done. Fuck. Anyway, it’s a good thing we have a decent TLC and editor.

Second, liberal translation and meme insertion was encouraged, though some people still chose to not add memes for whatever reason. As such, you can look forward to lines such as these (warning: very lewd):

“My excalibur is now completely soaked, shining with the intensity of a thousand suns.”

“Don’t mind me exaggerating shit and my memes too much.”

“So it be! The suffocating stricture of violating virginal vagina may have its endearments, but spelunking a cavern molded in one’s own shape, shewing perfect proof of personal possession, excites one’s nethers MOST magnitudinously!” (with original jp) (Conjueror approved!).

…Yeah, it’s going to be glorious.

I’m in charge of the “Piano scene” script, so if you don’t see it move for like a month on the tracker, you know what to do. I’m not sure what it is that you know to do, but I’m sure you know it.」

Hey everyone! I’m just a few hours into Himawari so far, and I’m already liking it quite a bit. It’s starting off with a fairly uneventful slice of life scenario. If you’re among the people who dislike the first half of Steins;Gate, or the common routes from Grisaia no Kajitsu and Key’s games due to their uneventfulness, you’ll likely dislike the first chapter of Himawari as well. I’ve always enjoyed these kinds of preludes, though. Practically every single time I’ve seen someone say “but the first half of this game is real bad, nothing happens!” I have a weird reaction. Like, what are they talking about? The first half of Steins;Gate is hilarious and cozy!

Am I weird? Japan keeps making stories like these by the dozen so it seems like my mindset is closer to the audience for these games in Japan. But I feel like the general western audience is largely averse to that style of storytelling. We want a constant string of events from start to finish. I almost don’t like that kind of fast pacing. In a serious and tense thriller type of story that may work, but for many stories I prefer more laid back and relaxed pacing. I often find that romantic type stories that try to cut the fat tend to overtrim and end up rushing things. What do you guys prefer? Neat and tidy stories, or relaxed and cozy?

Naturally, I expect shit to get real at some point in Himawari. It seems like it eventually becomes a pretty dang serious drama. I wonder how many of you know what this game actually is. It wouldn’t be a stretch to call Himawari one of the most successful doujin VNs ever released in Japan, yet western awareness for it is tragically low. r/vn/’s Fuwante wrote a pretty good post explaining what Himawari is and isn’t here. I strongly suggest anyone who enjoys character-focused dramas to check it out, and I suspect that’s quite a few of you. Himawari is the type of VN a large chunk of the community would enjoy quite a bit, I wonder if it can reach everyone.

Anyway, it’s pretty neat that Dal Segno is already at 100% translation and editing, that happened much faster than I expected. I was under the impression that it was somewhat lengthy and was billed as a successor to the Da Capo series, although maybe I was mistaken. Looking at the writing pedigree on it, it has one of DC3’s writers, a writer for a bunch of DC fandiscs, and then Koisuru Natsu no Last Resort’s main writer. Which, eh… Koirizo wasn’t very good, was it? I suppose I shouldn’t expect DS to be as good as DC3, but hopefully it’s at least somewhere in the same ballpark. It seems like we may not have to wait long to find out, DC3 and DS could be releasing rather close together. It’ll be interesting to see how the community compares the two.

Anyway, that’s it from me this week. I’m going to get back to reading Himawari. I aim to have a review up for it sometime next weekend. See you all next week.