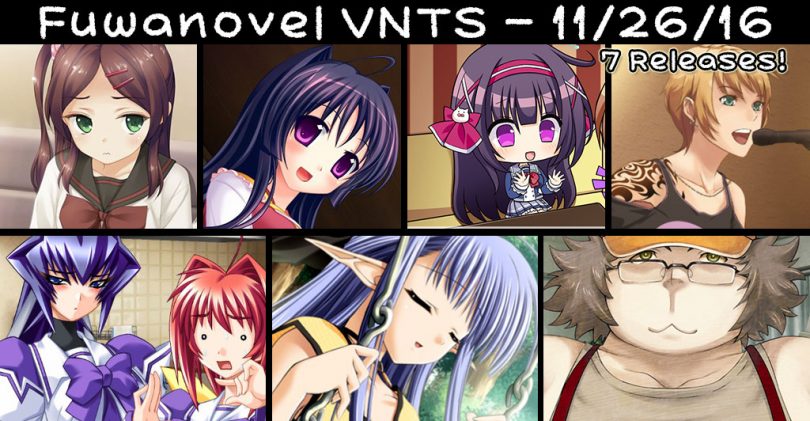 This week’s header image comes from our SEVEN releases; the details and links of which can be found down in the “Releases” section (click here).

From The Team:  Hey everybody, hope you had a good week (and a thankful one, for those of you who celebrate Thanksgiving). I’m trying out a new header style for these posts. Do you like it? Please let me know in the comments section!

One other thing — are any of you having trouble finding VN deals this weekend? There are a lot of them, after all. If need be I can put together a summary post tomorrow here on the site to help you track down all of the games on sale. – Tay

「Oh hi. Apparently writing things is a thing. Who knew.

I suppose you could call these busy times by my standards; I’ve been in two whole podcasts lately, and I’ve actually read visual novels! I’ve also neglected real life matters, but this is nothing unusual.

The first VN I read lately was Saya no Uta; this was my third re-read, and the first read of the JAST version. Why would I re-read it, you ask? Well, I wanted to be prepared for FuwaFM’s Swedish Meatball flavored Saya no Uta discussion podcast. As you might expect this is #massivespoilers, so tread with caution.

The second was Subarashiki Hibi, in the Original Fapanese™. Yeah, I got tired of waiting for KeroQ to figure out Western indie eroge publishing. Anyway, the first part is basically 20 minutes of denpa and 3 hours of yuri harem. Yes, yuri harem. Why is this not super a thing? It’s hilarious, and hilariously beautiful. I guess fun time is over though, considering I’ll have to pick Zakuro now…

…Speaking of yuri, the new Sonohana translation is out. Like Deccy below, I got a bit tired of just how much sex there was in sonohana; actually quit reading them because of it. I’m also hoping there’s more plot in this one, but uhh… I really have no clue. Pls do tell.

Thirdly on the yuri front, we have what I now can only refer to as “lesbian Taylor Swift”. Thanks, mat. I guess we’ll see if it lives up to the hype now… if there was any… well, at least I think I hyped it… uhh, kinda lost my train of thought there. Ah well. Love, Guitars, and The Nashville Skyline, here we go.

The Sharin Kickstarter has been restartered and things. It seems like they’re having better luck now – listening to fans actually making a difference? who knew. This gives me an excuse to slack on completing all the epilogues for the fan tl, so it’s allll good. Maybe I’ll do a side-by-side comparison of the tls like I did for the start of Saya no Uta… though considering how long it is that’d be a pain.

Apart from the s;g 0 port, the same team is also looking for translators for a port of c;h noah. They have the engineering side down and actually plan to release a port in Japanese first, which should be interesting for people who don’t feel like using a PSP emulator. I wish them all the luck.

Come to think of it, I did mention two podcasts. I’m not sure when the second will be out; it’ll be posted to Reddit at some point. Well, I’ve gotta go buy fries for dinner now. See you next… uhh, some later week, probably!」

Hey everyone! Well, this deluge just sort of happened, huh? Seven releases is kind of a lot. Tay had to make a new banner template just for this week. I wonder how many more weeks it will be used for. With the way things have been escalating, who knows. Next year could be even more intense than this.

This year has been sort of the year of the doujin. Many of the “AAA” VN releases I expected to occur this year did not. Delays were unfortunately prominent throughout the scene. The end result is that these major releases made way for a huge number of doujin games, many of which turned out to be quite good. Maybe Fata Morgana and Engima wouldn’t have received as much attention as they deserved if they were buried under a mountain of bigger names.

That also means next year will be pretty intense. I’m looking at the games that have been delayed to next year and the ones that were announced this year, and I think the people who don’t play doujins will end up having an awfully good 2017.  One release that catches my eye is Grisaia Phantom Trigger, which already has its date set for April 28th. I really hope SP is able to release Eden before then, it would be pretty absurd if the “sequel” came out before its predecessor. Trinoline is also set for March 31st in Japan. Minori producer nbkz said at AX that he wanted a simultaneous English launch for that. I wonder if MangaGamer will have anything to say about that in the near future.

Of course, this week has one hell of a bombshell in Steins;Gate 0. I’m extremely grateful for the relatively fast turnaround on this one. Unfortunately, I still have no means of playing it, and I’ve decided to not buy such a means this holiday season. It’s an extra bummer because Steins;Gate is actually my favorite visual novel, and all accounts proclaim it as a worthy follow-up. I’m a patient boy, though, I can wait some more.

And the waiting will be made easier thanks to folks porting the translation over to the PC version. There have been similar efforts made for other games in the past that we haven’t reported on due to piracy concerns. Taking a company’s commercial translation and redistributing it without their permission isn’t cool. These guys are doing it right, though, and basically following the Umineko Project’s blueprint by requiring you to own both games. It’s not cheap, but it’s the only real ethical way to do this. Legally speaking it’s still in a grey area, but I hope 5pb can overlook this if they aren’t planning on doing their own English PC release.

New Generation is also a game I’m vaguely interested in. I do like occasional cute and fluffy moege. I never really liked the Sonohana series, though. My biggest problem was that even for cute and fluffy moege, it still had less story than I wanted. The early Sonohana games I played were extremely heavy on the porn, extremely light on the story. New Generation is much longer though so I hope there’s a more even balance, even if it’s still basically nukige. I don’t know how much of the length is due to it being a more balanced story, or due to there being more characters. Maybe one of you guys know?

Anywho, time to look at all of these releases, maybe spend 45 minutes with one of them like usual, and call it a week. See you all later!

Please be sure to let me know what you think of the new format I used at the top of the post. If you like it, we’ll keep it!