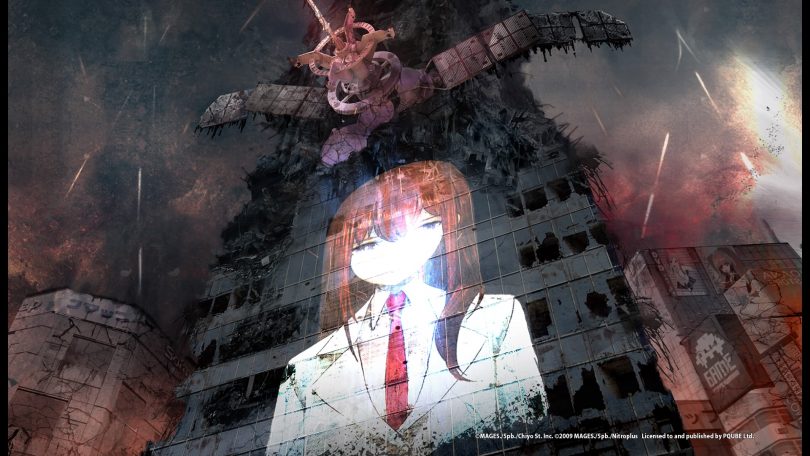 In Kill Bill 2, Elle asks Budd to compare the katana he once owned, made by the legendary Hattori Hanzo, to the one Elle is then examining, also made by the same legendary swordsmith. Nearly at a loss for words, Budd stutters out: “If you’re gonna compare a Hanzo sword, you compare it to every other sword ever made… that wasn’t made by Hattori Hanzo.” I feel roughly the same about Steins;Gate 0 and Steins;Gate. A desire to compare and contrast the two is inevitable, and I’ll be doing some of that, but it’s probably more fruitful to compare Steins;Gate 0 to every other VN not named Steins;Gate. Steins;Gate 0 is a masterpiece.

For starters, a brief warning: this is definitely a sequel. I’ll be avoiding spoilers for either game here, but if you haven’t either played the Steins;Gate VN or watched the anime, don’t play this game. Play the original VN first (or at least watch the anime) and see all the endings. I’ve seen at least one person claiming that Steins;Gate 0 won’t make sense even if you’ve watched the anime but not played the VN. I disagree. I watched the relevant episodes of the anime to confirm, and I think it’s absolutely a sufficient background to fully enjoy and understand this game. But you should seriously play the original anyway, since it’s fabulous. 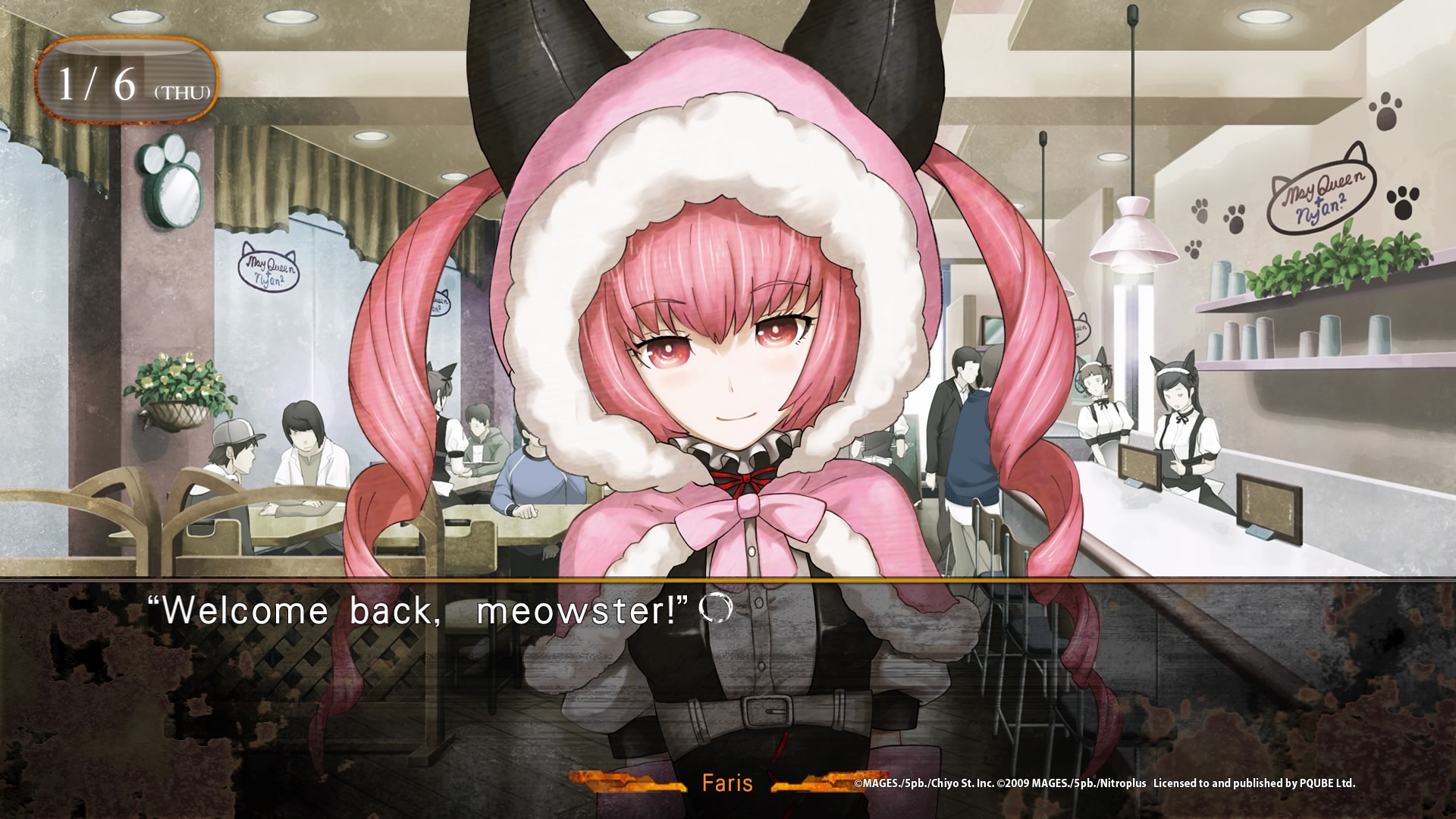 Now, let’s get nominals and mechanics out of the way quickly since I want to spend the bulk of this review talking about the plot. Characters, both old and new, are generally interesting and engaging, though a couple of the minor ones do feel like throwaways (especially Kaede and Katsumi). The major new characters, like Maho and Dr. Leskinen, are well-rounded, interesting, changing individuals, and a real pleasure to spend time with. The character sprites are as gorgeous as I expected given the original. The background art is fine — I don’t think it’s anything to write home about, but it’s good, and it often adds character to the scenery, especially in homey places like the lab. CGs are by and large beautiful, and there are a lot of unique ones in each route. The soundtrack has a very similar feel to that of the original, and brings along a handful of remixed pieces from the original, while also bringing excellent new tracks to the table.

The translation is nothing short of fabulous. I normally don’t even mention the UI, but I feel obligated to bring it up because it’s actually really slick: probably the best-looking I’ve seen, and also very easy to use. Going to the system menu in-game actually causes the game to shrink a little and the menu to appear on the left margin with a nice animation. I played on the PS4; I’m not sure how the PS Vita version compares, though I’d be surprised if it’s substantially different. The original game’s Tips feature also returns, as an easily-accessible in-game glossary, necessary (at least to me) given the game’s fondness for Japanese memes, conspiracy theories, and anime brands, many of which I wouldn’t recognize without that help. 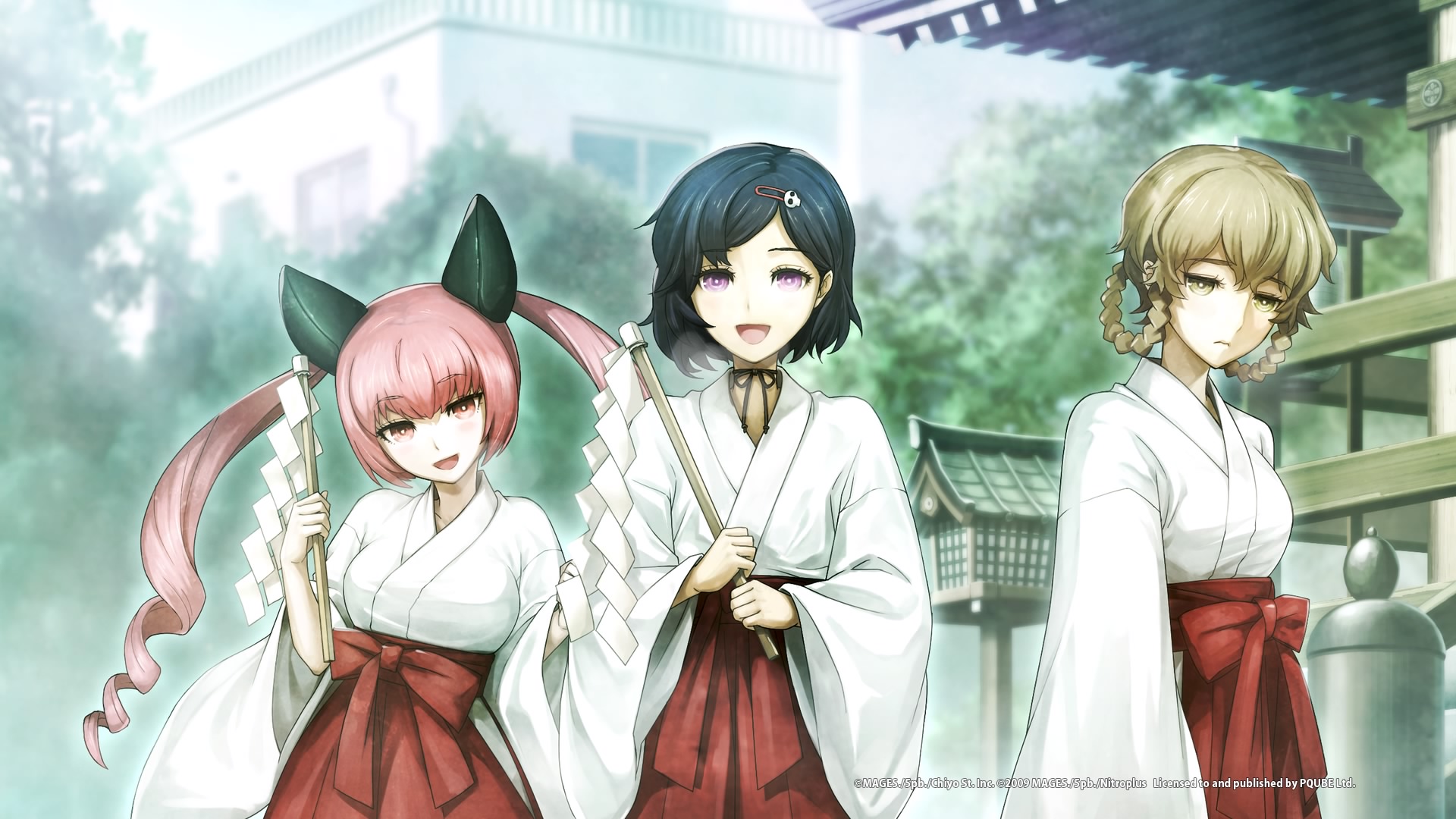 The choice system is the same unusual one from the original Steins;Gate, where a single missed phone call can change your fate. However, the paths through Steins;Gate 0’s routes are generally much less predictable than they were for most of the routes in Steins;Gate. Additionally, there is no complex sequence of correct choices needed to reach a “true route” in Steins;Gate 0, unlike the original. I view both of these as improvements, and they both fit well with the game’s intention for you as a player: that you should muddle your way through naturally, putting the pieces together, until you’ve experienced all the routes. I strongly recommend NOT using a guide for that very reason. I had no difficulty completing all the routes in the game (and getting 100% of the CGs in the process) without a guide and without feeling like I was forcing myself through anything unpleasant. If anything, I expect I found all the routes by myself just as fast as I would have with a guide. To give you a rough feel for length, the game took me about 32 hours to complete; the only thing I didn’t do is get all the Tips, presumably due to missing a whole lot of the possible text message conversations. Maybe I’ll go back for them someday, but not today.

When the story isn’t propelling you through action sequences or making you dread some approaching horror, it does spend a lot of time on slice-of-life scenes. Many of these frankly serve little purpose to the larger plot. It isn’t really necessary to dress up most of the girls in shrine maiden costumes. They are, however, cute as a button while wearing them. Steins;Gate 0 spends perhaps a bit too much time all of those sorts of scenes, especially the slice-of-life, but I forgive it on the same grounds that I do when I see it in any other VN: it’s there to establish rapport between the player and the characters, to make for a bigger emotional payout later on when things get serious. And for the most part, it’s a lot of fun. While that bonding time is less necessary for older characters, since the player is presumably coming from a background of having experienced the original Steins;Gate one way or another, the mostly uses it for establishing the many new characters who are key players in the story, as well as to establish the changes to the characters carrying on from the original, notably including a much-changed Okabe. 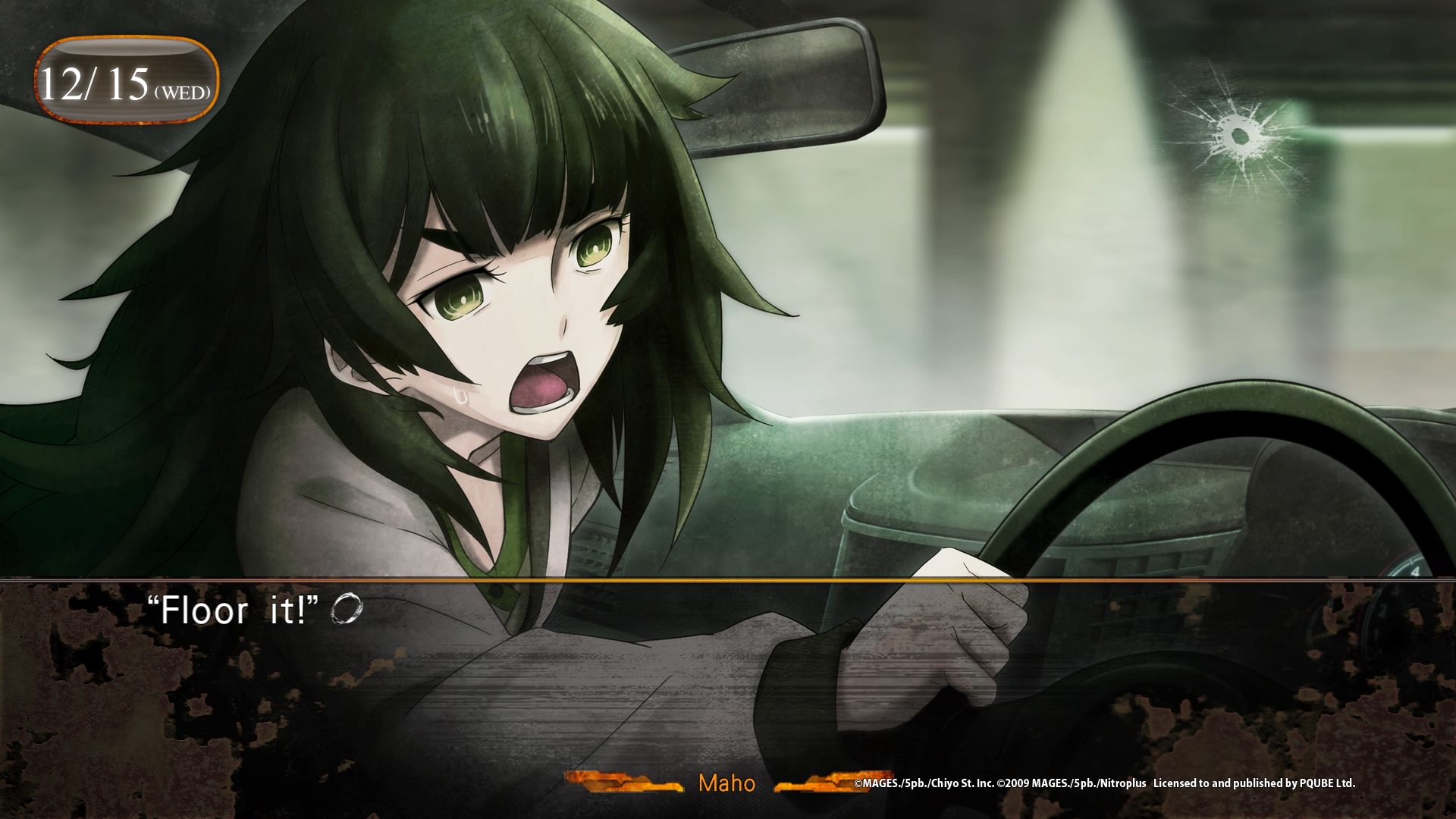 Outside of those more emotionally-appealing scenes, there is of course a much larger plot at play: the story’s initial hook appears about 45 minutes in, and it’s a doozy, especially if you think for a second to figure out the obvious next step. From that point on, you’re quickly dragged into the same emotional state as Okabe: worries and conspiracy theories, and a sense of powerlessness, whirl through your head as the plot advances. Who can be trusted, and who can’t? How can Okabe and his friends not only survive the present, but change the worldline itself to prevent the horrible path it’s headed down? What apparently-minor choice will trigger such a change, and what kind of world will the new one be?

As I muddled through route after route, all the while considering those questions, I came to the realization that this same goal of identifying the player and Okabe is built into not just the execution of the plot, but also the very structure of the game. Unlike in the original Steins;Gate, where the choices you make always result in a truly final ending to the story, and thus feel like more of a terminal experience for the protagonist Okabe, the multiple routes experienced in Steins;Gate 0 overlap in complicated ways, and can be viewed as being experienced by the protagonist in a single universe, across multiple world lines. When you, the player, finish a route and reload or start over, searching for the next route, it’s not just you making that choice — Okabe’s right there with you, searching for another world line, the next link in the chain that leads to his goal. The story doesn’t end with a route: as the lone observer of multiple world lines, it’s your responsibility to shepherd the world through all these necessary futures, and in so doing, reach the truth. Because while there is no true route in Steins;Gate, there is a truth, and it is the sum total of all the routes. 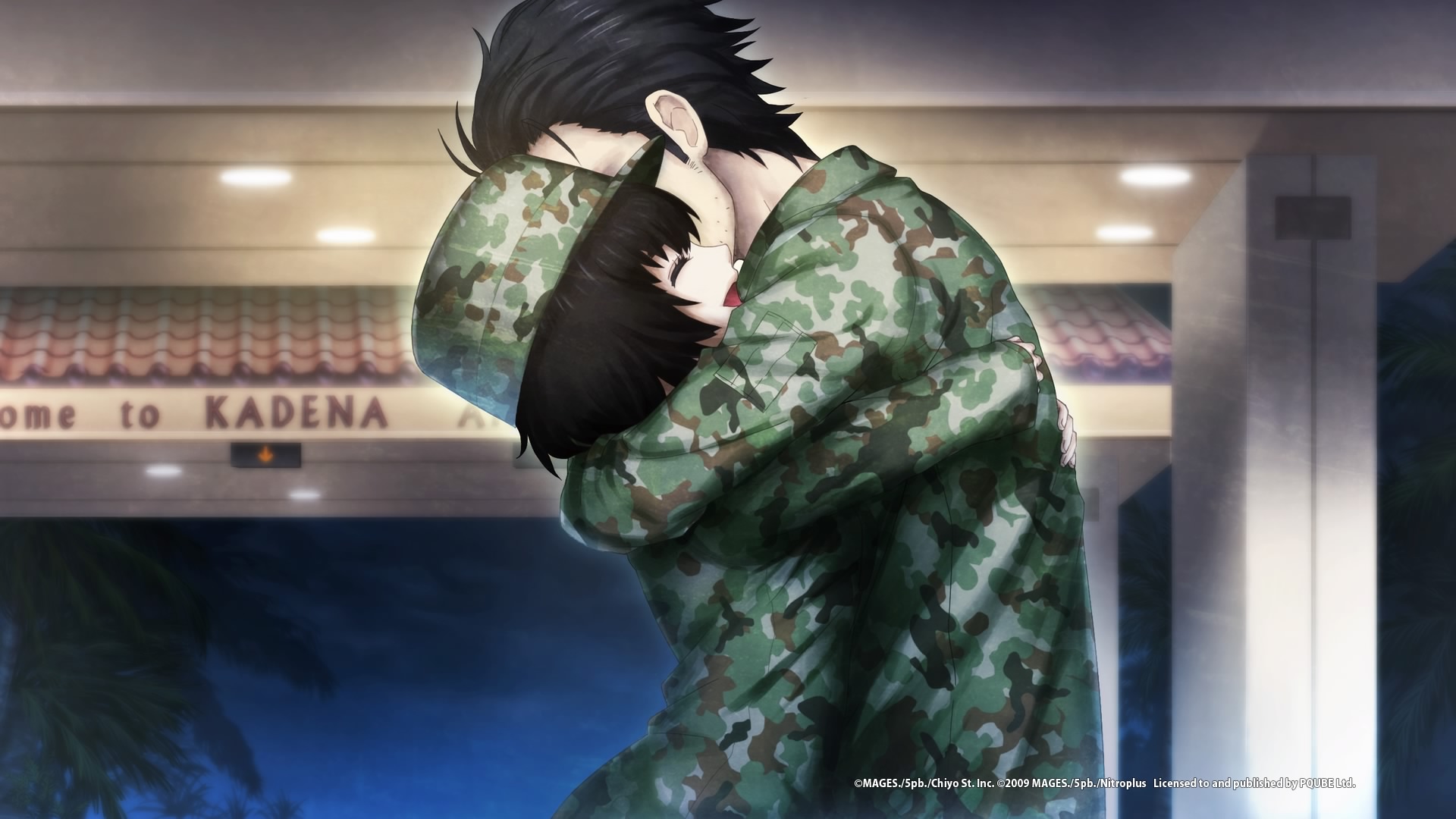 And that’s freaking amazing! I’ve never played a game like this before, and I can’t describe how empowering some of those endings feel, as you inch closer and closer to your ultimate goal. Every heartbreak on the way, every loss, every failure, but also every brief moment of repose, every blushing stammer, and every heartfelt hug, by the end you feel that they’re all laser-focused on reaching that goal, and you want nothing more than to find it. And when you get there? It’s okay. It’s not the amazing climax you might expect, to be honest. It’s maybe even a little draining. That’s less because of the natural mental lull after finishing a good story and more because the structure of the game doesn’t lend itself to a single ending, because a final resolution is not to be found in Steins;Gate 0. Steins;Gate 0 is not the story of a destination. If you’ve played Steins;Gate, then within minutes of starting Steins;Gate 0, you already know the destination you’re hunting. Steins;Gate 0 is the story of the long, twisting journey there. As a result, the endings themselves are not that satisfying, but the overall sense of completeness you feel, and also the appreciation you gain, for the Steins;Gate universe after completing this game will be vastly greater. Together, the two games form an incredible story which goes far beyond what the original provided alone.

An early review key was provided by PQube games.

+ The unique overarching route structure, only possible because of the game's topic of time travel, is immensely satisfying.

- Even the most positive endings are somewhat unsatisfying unless viewed in the larger context.