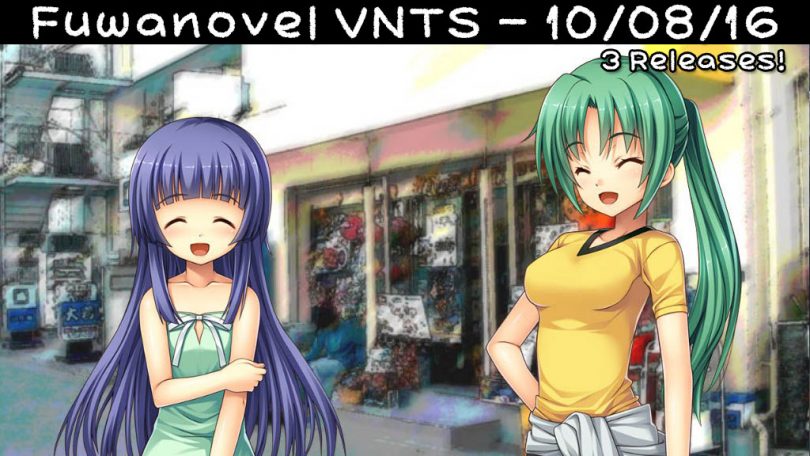 This week’s header image comes from one of our three releases: Higurashi Retranslation (MangaGamer) – Chapter 4 -which you can pick up here, or get all four chapters in the Question Arc bundle

Hey everybody, I need a favor. Take a sec and let me know in the comments how you’d answer the following question:

Q: When you check VNTS each week, are you tracking specific games? If so, approximately how many are you tracking?
Answer in the comments section at the end of the post.

Lastly, I wanted to apologize for not posting Sekai Project’s updates last week: when I tried to access their updates tracker, the site was down.

「So, uhh, I didn’t write anything for ages. Actually, have I actually done anything for ages? I’m not actually sure if I currently exist, or why I love the word actually so much. Anyway, consider this a tentative return to actually hoping for and not getting commentary half the time.

I’m going to start with Enigma. Fruitbat Factory doesn’t seem to get that much brand recognition over here, despite the fact that they’re currently involved in the localization of frickin’ Little Busters EX. There’s a funny story about Enigma; apparently they thought Conjueror really wanted to translate something with an island in it, but what he really wanted was to translate Front Wing’s ISLAND. I’m not sure how much is true and how much is meme, but nevertheless he took the job so maybe there’s something to it. It’s “a fantasy/mystery VN about a terminally ill ex-soldier looking for answers on a mysterious isolated island” according to Conjueror, which sounds pretty good to me. They actually have a steam page up. I wonder if that one’s in our tables… well, whatever.

Himawari is at last out of beta. Good. It’s probably still going to need some Front Wing cooperation. Bad. I think I’m just going to invoke JAST time on this baby, despite the good news.

Deccy says below that ch. 5-8 of Higurashi will probably be edited rather than re-translated, but I never heard anything definitive on the issue. While 5-8 was better than 1-4 for sure, I have to wonder if just a tlc+edit pass is really what we want. It will probably go faster in that case, so I suppose that’s a plus. From recent experience though, sometimes you might have the TLC not find actual fault with a line, but have it bad enough that the editor can’t really make it sound well either or risk dropping the actual meaning. In the end, I was able to rewrite some pretty meh lines after doing a random check of the release candidate version – because I know some Japanese. Now this was a fan project for an R-Rated doujin so standards were going to be low no matter what, but I don’t think official localizations would in any way be immune to this. Not doing a re-translation will probably save cash, so I can see it happening. From what I remember of reading it a few years ago the editor will have their work cut out for them if they want it to actually sound fully natural, so good luck if you go that route, I guess.

SukiSuki’s translation is almost done! Pretty fast job it feels like, and editing is keeping up as well. Moege fans should be happy, though the nebulous scripting and beta testing phase could of course take silly amounts of time. At least it’s not Front Wing, I suppose.

MYTH should be interesting, Ne no Kami’s first part is hopefully fairly self-contained as part 2 was in-dev back when SP licensed it, and Sharin no Kuni’s second campaign will hopefully bring us some better PR or they might just get another bleak winter thrust upon them. They did make many of the changes requested by the community, so things are looking up. Hopefully.

Anyway, I managed to canoodle dad into getting us pizza tonight, and apparently canoodle has some sexual implications I totally didn’t know about when I wrote it out, but I’m going to use it anyway and damn you all I’m having pizza so I win anyway. Inc closing, since Deccy posted some music link below, allow me to foist upon you something interesting of my own. In link form, of course, wouldn’t want to be too flashy.」

Hello everyone! I’ve been asked about the Dracu-Riot patch so I made a quick post on the fuwa forums about it here. We won’t list it here because it’s not even really meant to exist. It wasn’t ready for prime time. If you want to play it anyway, it’s out there, you can find it.

Big week for MangaGamer this week. Arguably a bigger week than last week. I can’t be the only one more excited by Myth’s release date and Himawari’s “soon” status than by the Umineko fighter and GGN 2016. The Umineko fighter actually has a decent number of fans, so I’m sure it’s not bad. But I’m also not really sure why that setting needs a fighter, and if I ever do play a fighter these days, I’d rather have it be one with a top-notch gameplay system and only an okay story than the other way around. I’m not big on fighting games either way, though, so what do I know? The jumps in MG’s numbers were also pretty sizeable this week and the clicker fan in me is very pleased, but do keep in mind that this progress was over the course of three weeks.

The Higurashi release is pretty cool. With this, the retranslation phase is over. I’m not fully sure of what MangaGamer’s plans are with Chapters 5-8, but when they first announced this re-release effort, they stated that only the first four chapters would be retranslated. I have to assume that they’re sticking to this plan. I don’t know what this means for 5-8’s release schedule, however. They still have to give those editing and QC passes, so maybe they’ll still be released piecemeal, although for some reason I was under the impression that they’ll be released in one big chunk, like how Umineko 1-4 was. Eh, guess I don’t have any answers for this, hopefully we’ll find out soon. I’m excited for that to happen, since that’s basically when the “real” Higurashi starts.

In non-VN news, Mafia III doesn’t run on my PC :(. I’ve got a real aging CPU but it still works fine for like 98% of everything I want to do. It’s the kind of thing they can patch in support for if they decide to do so. Hopefully they do. It’s missing an instruction set and could probably otherwise run the game fine. It kind of annoys me when developers drop support for hardware that is actually perfectly capable of running their game, so they have fewer configurations to test. C’mon guys, I know there’s not many of us Phenom II users left, but, well, we’re poor! Throw our destitute asses a bone here! Thankfully, Civ VI seems like it will run for me. So at least I have that going for me.

This week’s Album of the Week is Psychic, by Darkside. Nicolas Jaar’s new album actually came out a couple weeks ago. It’s good, but it really got me listening to Psychic again and god damn. That’s one hell of an album.