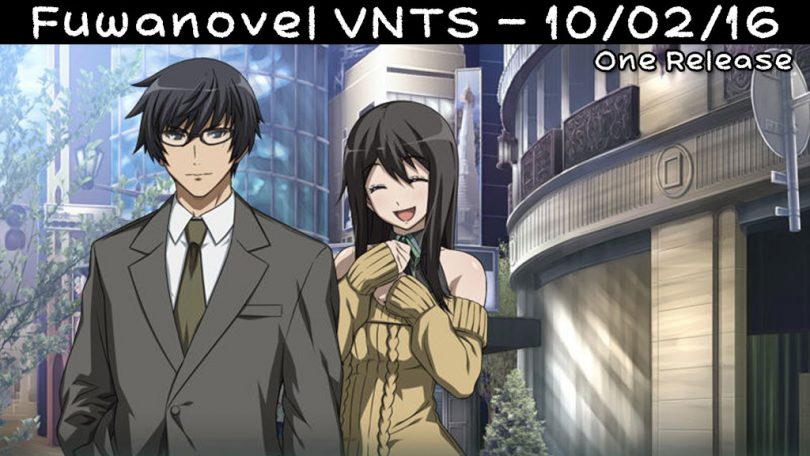 This week’s header image comes from this week’s lone release: the unfortunately-titled Please Bang My Wife from MangaGamer (get it here; obviously NSFW).

Busy weekend. Delayed VNTS until Sunday so we could cover the Anime Weekend announcements, and then my power went out. So fun!

「… Will Zaka appear this week? Has be been eaten by a grue? Stay tuned to find out.」

Sorry for the late VNTS everyone. We planned to delay the VNTS, as I discussed last week. Then the delayed VNTS got delayed again. Well, we still met our target day, so I guess it isn’t all bad.

ChuSinGura 46+1’s final two chapters came out the other day, and boy, they don’t look great from a translation standpoint. Such a shame, too. This is basically a legendary award-winning doujin that everyone seems to respect, everyone except the company who decided to translate it. When you release something that shoddy, you disrespect the work, its creators, and its fans all in one fell swoop. Maybe I’ll give it a try later at some point just to see how it really is like, but I’m kind of afraid, I don’t want my first experience with the game to be a negative one. But I also doubt a better translation will ever happen, so I should bite the bullet and check it out eventually.

Boy was I ever overly optimistic on my AWA MangaGamer predictions. That’s okay, I usually am, I expect it at this point. I should have also expected Go Go Nippon 2016 for sure. Well, now I know for next year’s AWA.

One thing of note from the Denpasoft panel is that they did talk a little bit about 18+ releases of current SP titles. The two they brought up specifically were Baldr Sky and Maitetsu. With Baldr Sky, they said they’re still in negotiation and it sounds uncertain. With Maitetsu however, it sounds like an 18+ release is going to happen, in some form. Denpasoft has claimed that they “think” they’ve “found a solution that will make everyone happy,” but they’re still working out the details so they don’t have anything to announce yet. Whatever that means is up to your own interpretation, but it’s apparent that some kind of adult release is in the works.

Personally, I don’t think everyone will be happy unless all of the content is available in english, one way or another. One of the more plausible speculations I’ve seen is that some of the h-scenes will only be available if you download an “unofficial” patch similar to what JAST does. They claim they’ll announce their plans in more detail by the end of the year. Oh, also, I think Tay missed this but there will be a Wagahigh kickstarter. This was also mentioned at the Denpasoft panel, so it can probably be assumed that will have an 18+ version but they didn’t come out and say it straight up.

Anyway, short commentary from me this week. See you all later.