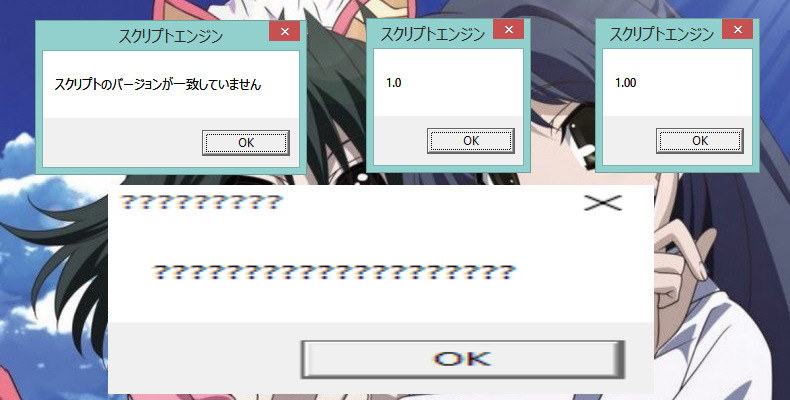 The unfortunate truth is that despite all the delays, the game is shipping out to customers laden with show-stopping bugs. Many people are being frustrated by crashes, freezes, saving issues, and more. While we can wait for a patch from JAST, there’s no telling how long that process can take. Instead of waiting for that to happen, let’s figure out together as much as we can about the various bugs Shiny Days faces and their workarounds.

Problem 4 was caused for me because I have the Overflow’s original version of shiny days installed as well. Both Overflow’s version and JAST’s use the same registry keys, but both games require a different value for the same key.

The registry key in question: HKEY_CURRENT_USERSoftwareOverflowSHINYDAYSInstallScript

Switching between the two values fixes the problem for me.

It appears that this issue is caused by a registry conflict when installing the Japanese copy of the game first. There could be other causes as well, but the issue is in the registry. You can modify that value, or I’m pretty sure you can delete it as well since my copy of the game didn’t install that key at all. In order to access your registry, launch the “regedit” program. In windows 7 and up, just open the start menu and type in regedit, in lower versions open up the run prompt first (winkey + R). Then browse to the key using the folder-like interface and modify it to 1.0. Alternatively, do a full uninstall of all of your copies of shiny days, wiping the registry clean, and reinstall the JAST version.]

Here are some resources that might help you troubleshoot your problems:

This kind of launch is always sad to see. 0verflow’s games have always been criticized for being buggy, and in many ways there’s only so much JAST can do as simple translators. Their response to the problems have not been particularly impressive, however. Things were made even more hectic as their new order processing system had a hiccup, forcing them to manually process all orders by hand upon the game’s launch. Hopefully they manage to step up to the plate and make things right from here on out. While these issues continue to exist, however, I unfortunately have to recommend that people NOT buy Shiny Days.

If you have encountered any problems not listed here, or have discovered solutions to problems that we have not, then please do inform us in the comments or in the forums so we can keep this article as up-to-date as possible.

Update (9/28): Sanahtlig posted in the fuwanovel forums some information translated from the Japanese site’s support pages:

I also have my own suggestion for those frustrated by having a small window in windowed mode: Try using Windows’ built in zoom function (Windows 7 and later). Hold the windows key on your keyboard and press the plus key on your keypad to zoom in the screen. Hold  the windows key and press minus to zoom back out. You can customize the zoom to your liking via the tool that pops up. Windows does no smoothing when doing this so it’s not an optimal solution, but it may be better than having to squint at a tiny window for hours on end.

Update (9/29): Added a possible workaround for the fullscreen crash. Try entering into fullscreen mode by pressing alt+enter instead of using the options menu. This has worked for some users, more testing will be needed to ascertain whether it’s a universal fix. Tim from JAST has also said that users have experienced better results when using Windows XP compatibility mode, although he was unclear for which issues.

Update (10/03): Still no patch, but progress is being made. JAST has posted their own helpful guide on the blog linked above. Also, Bou in our comments below posted a possible fix involving modifying registry values for all of those suffering from Problem 4, the Setsuna costume error. I also added a link to a 100% globalflag.dat file so people can resume where they left off if they were hit with the Namami ending bug. With these new fixes and workarounds, it seems that most major issues preventing people from playing the game are now either resolved or worked around. Thank you to everyone who contributed. Now we wait for JAST to apply some proper fixes.

Update (10/06): And this post gets progressively longer and longer! The first patch is out, this one fixing the Manami save bug! Grab it here. (Note: It was removed from the JAST support page a few months later, this unofficial mirror is provided by Sanahtlig.)