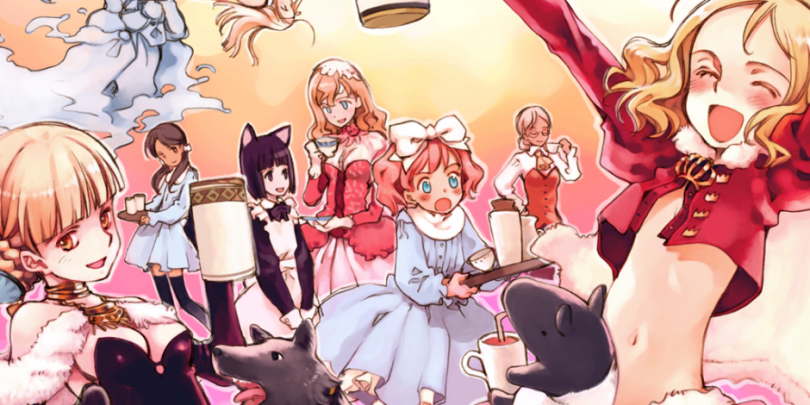 An official English localization of the VN/raising sim hybrid Girlish Grimoire Littlewitch Romanesque has been released by JAST. Originally slated for release on the 16th, it was finally available for download on the 22nd after some delay characteristic of the publisher in question.

A brief overview of the story and setting as given by JAST:

Welcome to Stella Mundo, a magical world still recovering from the devastation of the Mage War that ended the Age of Towers.

Domino, the youngest wizard to earn the rank of Archmage, has just begun his study of the ancient Dark Tower, a treasure trove of lost magical knowledge that he hopes to rediscover.

But there’s a catch.

As its price for allowing him to study the tower, the corrupt Council of Archmagi has assigned Domino two gifted but troublesome students –  Aria, the daughter of a noble family, and Kaya, an orphan with an unusual heritage – and given him just three years to complete their training, a process that normally takes decades.

Does Domino have what it takes to lead Aria and Kaya to greatness? Their fate is in his hands.

In Romanesque‘s gameplay portion, you teach your two pupils magic with spirit (essentially experience points) gained from rolling dice (which isn’t as boring as it sounds due to other mechanics playing into it). These spells are needed to complete quests which advance the plot.

The version localized by JAST is the Editio Perfecta, which combines the original release with its fandisc and adds an all-new scenario to the mix. The game clocks in at a hefty 30-50 hours with a total of 12 heroines.

Littlewitch Romanesque can be bought on JAST’s website for $39.99. As far as I can tell the digital download version costs the same as the hardcopy (minus shipping, of course), and that version comes with a download code anyway. I have no idea why.