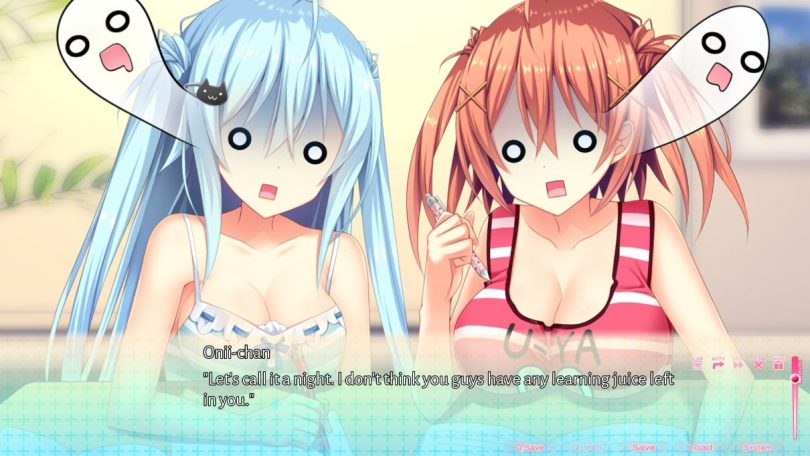 To quote Austin Powers, “Twins, Basil, Twins!”. It’s not an uncommon fetish, so it’s no surprise that Chinkamo Twins – My Twin Sisters Are Totally Into Me exists. I quite enjoyed the last visual novel I played with a twins route, so I was curious to see how Chinkamo Twins panned out.

Chinkamo Twins has us take on the role of the protagonist, who we only know as ‘Onii-chan’. Onii-chan lives with his two younger sisters, Saya and Uya. There’s no tragic backstory here like in some visual novels. They’re not living with him due to losing their parents or such. They just absolutely adore him and followed him at some point after he moved out.

Saya and Uya’s love for Onii-chan is their primary motivation throughout Chinkamo Twins. They studied to get into a school he started teaching at, but have started to get bad grades again. This starts study sessions with him and the promise of a reward where he’ll grant their wish.

After an event or two, both twins start questioning their feelings, quickly deciding that they see their brother as a lover, as well as a brother. This soon turns sexual, with a minimal