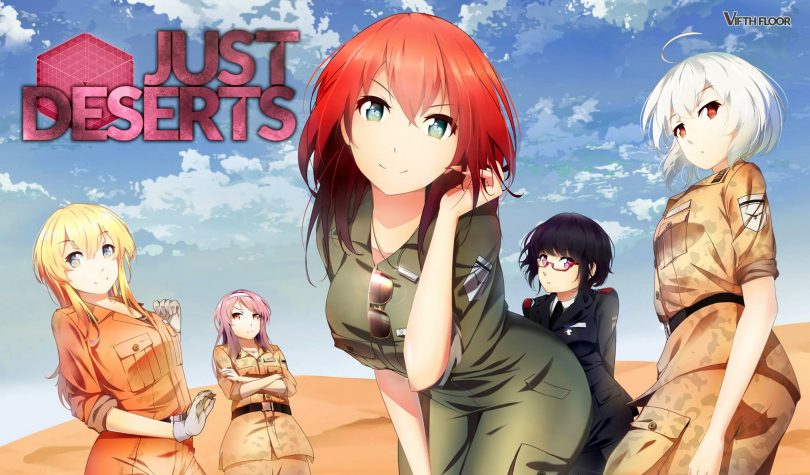 When it comes to the typical visual novel and/or dating simulator, sometimes the reason why your protagonist is seemingly the only male dating option for the bevy of beauties is apparent. You’re the only male admitted to an all-girls school (or to a school that only has five girls). Or you’re the only male interacting with all of the girls placed as routes in the game. That sort of thing.

Then you have Just Deserts, where you, <insert your chosen name here>, are a (seemingly) genetically enhanced lieutenant of some form of military operation. Aliens are on the doorstep of an important city out in the middle of a desert, and you’re getting dropped in as a specialist to deal with them. You get to base and… it’s loaded with babes, dude! SCORE! And there’s your premise – live on a desert base, kill aliens, woo the women, all in 30 days. 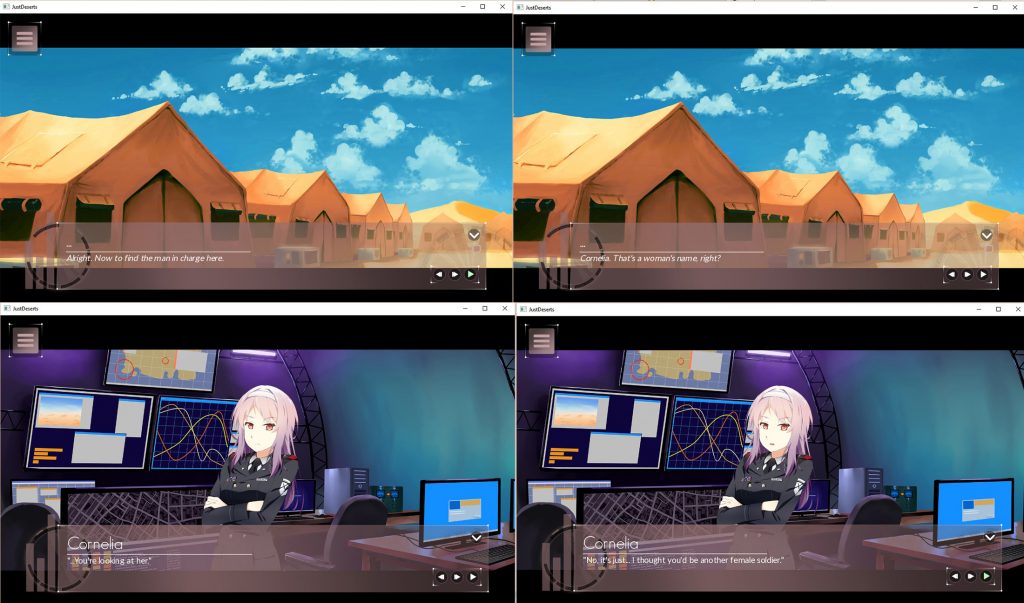 Sekai Project, they who seem to be everywhere, produced this hybrid visual novel/dating sim, and it was developed by an independent studio by the name of Vifth Floor. (That’s a Roman Number V for 5 for those not in the know of Roman Numerals, or at least I hope it is because otherwise the company needs a rebranding already.) I’ll start with one point right now, I don’t know the budget of the project, but the fact that it’s in the desert gave the development team a big advantage in that they can reuse one scene for practically three-quarters of the story. You will spend most of your time looking at variations of a desert. Desert with girls. Desert with aliens. Desert with nothing. Just deserts… I SEE WHAT YOU DID THERE!!! Sneaky, cheeky blokes. 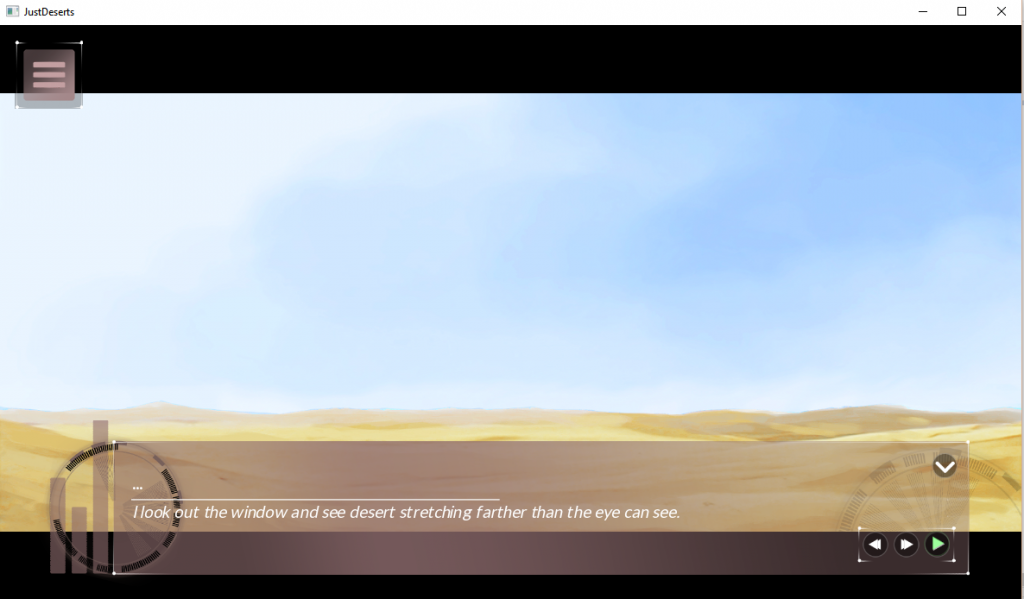 Better get used to this scene, soldier.

Down to the gist of it. Your primary goal in this game is to score the heart of a waifu. You’ve got five to choose from, and they’re seemingly from all over the globe. Must be a UN mission or something. The commander, Cornelia, is British (but don’t go by her accent, sorry, but it’s really a bad impersonation of a British accent). Her Number One is Yumi, who is listed as Indonesian/Japanese and has the voice of an angel but not of either of those countries. Jennifer is your American helicopter pilot and serves as the redheaded, oppai, tomboyish, freespirited character, and also has the truest accent in the game, since the actress probably actually was American. Cecile is French (I’ve heard worse impersonated French accents, so it’s passable) and is the mechanic. Finally, you have Eve, a sniper who says little, has no nationality, and must be the blood of the dragon or demon or something.

How do you go about winning the waifu? You mostly buy them stuff from the cafeteria or the city store (when you finally have access to it). When you talk to them, you can ask them for a quest, and it’s usually buy the girl something, train with the girl, or go somewhere with her. She gives you the amount and how much time you have. Complete the quest, gain love gems…  sorry, wrong game… gain love points. Fail the quest, lose love points. Hit certain goals and you move yourself out of the friendzone and into the endzone (which is now the worst euphemism ever made for getting into a 2D girl’s pants).

Bit of a warning – early on scout out what’s in the cafeteria before asking for quests. Some items the girls want aren’t there, and can only be obtained in the city store. You won’t have access to the city for the first few days though. I made the mistake of accepting a “buy this item” for Yumi only to tragically see it not in stock at the cafeteria. Two days later I’ve failed the quest and Yumi kicked me in the digital nuts. Okay, not really, but I did lose love points needlessly. Kind of a frustrating flaw there, developers. 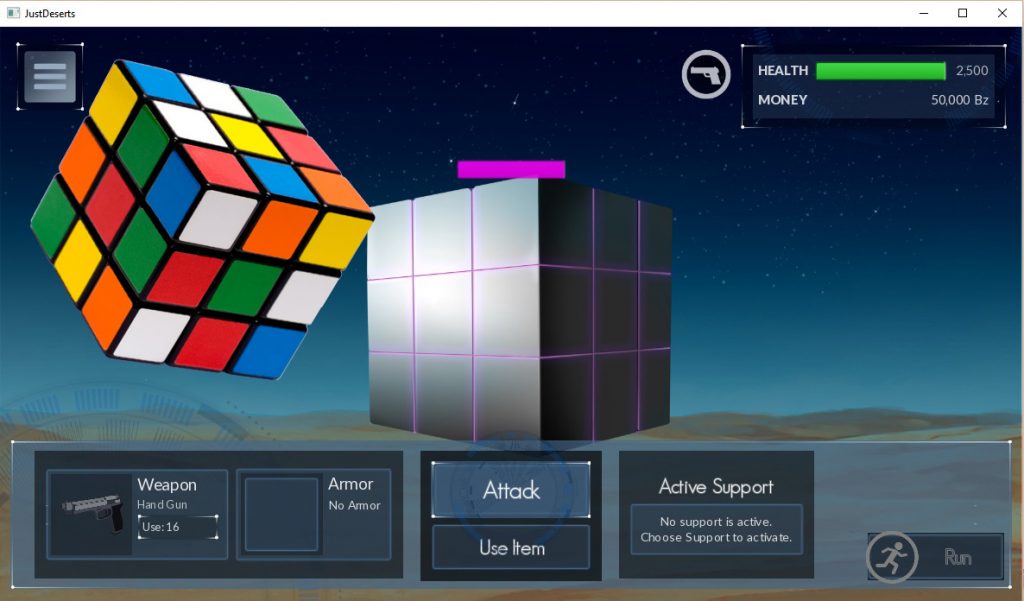 One is an alien bent on destroying humanity by violence. The other is an alien in Just Deserts.

So then, you need money to buy stuff to win the waifu. Your only source of money is to patrol for aliens. The game employs a painfully slow combat system (that you can’t skip out of) where you take on the entire Russian army of variant Rubik’s Cubes that have been engineered to float in space, shoot various things at you, and now resist you peeling off the stickers to cheat at solving it like us old people did in the 1980’s. You can purchase a mystery concoction that, for some reason, lessens your chances of meeting aliens. But you only earn 40000 credits for a mission with no fighting and the concoction costs 20000. You start with a knife and handgun, and if you keep killing enough aliens you may be able to afford buying a weapon with a little more punch later on. Maybe. If your waifu doesn’t keep getting sick.

Seriously, every day one of the girls has a tummy ache and it’s up to you to hoof on over to the cafeteria to buy expensive medicine to make her feel better if you want to interact with her. Liberated women in the army on the front lines my ass. I’m a genetically engineered badass, not some errand boy trying to score 2D romance while being attacked by 80’s nostalgia toys.

Speaking of costs – EVERYTHING costs in this game. You can take one of the waifus on patrol with you, but it doesn’t really do anything for you unless you employ her skill. However, you have to PAY the girl to use her skill, each and every time. It only lasts one turn and you have to keep paying over and over and over if you want that help. Pretty sure that’s not how any modern military operates. “Hey chopper girl, could you blast that alien over there before it irradiates me again?” “I could, Joe, but I need a new bra so you’re gonna have to pony up. But hey, if you make enough money to buy me medicine, pizza, beer, go swimming at the city pool and grab a meal with me I might let you cop a feel over it later.” 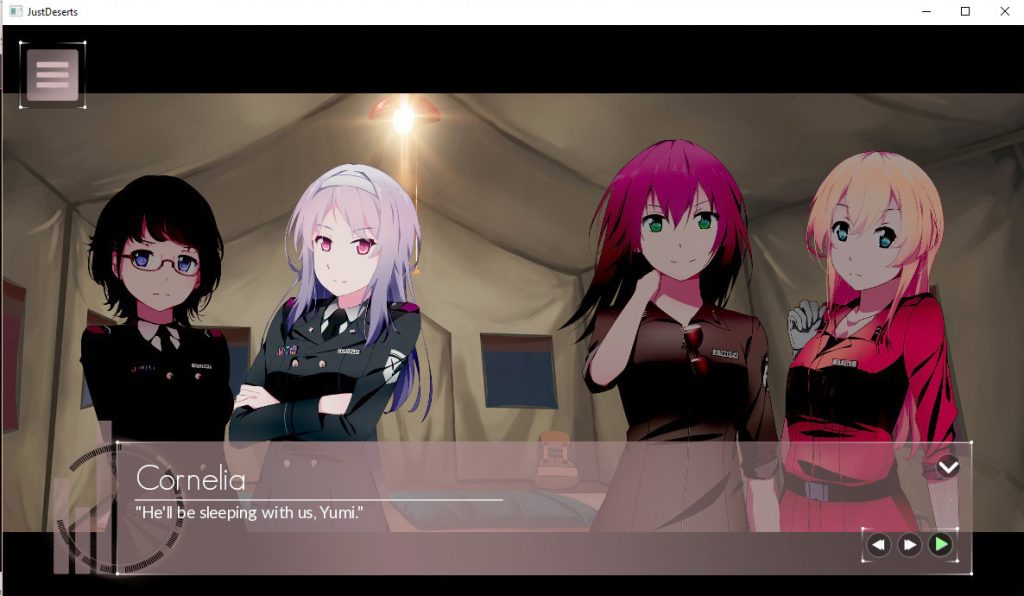 Ladies, ladies, there’s plenty of protagonist to go around.

Speaking of which, for getting irradiated by floating 9 x 9 Yuppie-era games you certainly don’t feel the effects of it at all. Get back to base and you’re all healed up. Maybe the scientists found a cache of Rad-X (Fallout reference stolen shamelessly by me) and infused it with your blood. I will say this – they scored points by not having you lose any stats for sleeping. This is one quirk of mine (which killed Sunrider Academy for me) – I *HATE* when sims have you lose stats because you slept. Science proves again and again that sleep is AWESOME. You should do nothing but gain stats when you sleep, because you’re resting your body, resting your brain, and making yourself more alert for the next day. When you sleep in Just Deserts, you gain all your stamina back and lose nothing. All refreshed and ready to win that waifu.

The sprite artwork is great and has some truly good opportunities for screencaps to turn into avatars and banners and whatever else you want to celebrate your 2D woman of choice. Backgrounds are done well, too, just don’t expect too much variety from desert to desert. But sprite art is the strength here and I’d probably commission the sprite artist for a cute girl piece. Though I will complain that the aliens feel very uninspired, but I’m pretty sure you got the gist of that earlier.

The main drawback is that the story just doesn’t feel very fleshed out. You’re there to fight aliens, but it seems like just a side plot to you trying to win over a waifu. As such, the main story doesn’t really feel like it’s there as a main story, but as a means to get money to woo the girls.

The voice acting ranges from good (Jennifer) to confusing good (Yumi) to okay (Cecile) to barely there (Eve) to let’s not go there (Cornelia). The music was okay, nothing too memorable but not annoying or anything. The point mechanics for winning over the girls is mostly fine, aside from getting quests you can’t complete due to restrictions placed at times.

In summary, Just Deserts mostly feels incomplete and could do with a good bit of polishing to improve the product. Either speeding up the combat scenes or allowing you to hit the ctrl key to speed through them would be nice. Making sure quests align up with areas accessible would be good, too. And lowering the price of some of the stuff would really be a good idea. Fleshing the story so it resonates with you trying to win a girl over would be nice as well. For an initial effort it’s okay, but there’s a lot to improve on for subsequent efforts. Good luck, Vifth Floor!

A Steam key was provided by the developer/producer for the purpose of review. Thanks for your support!

+ I could listen to Yumi talk forever, even if her voice has no accent

- Main story doesn't have much impact

- Combat system is slow and paying for everything gets old