At this point, it would be fair to call the guys over at AJTilley.com a bunch of geniuses, or at least a bunch of people who, in the real world, would be described as talented con artists. Through their numerous Kickstarter projects, the company has managed to churn out visual novel after visual novel without any sort of quality control except for maybe the Steam Greenlight program. Of course, any Steam user will inform you that getting greenlit is just a matter of publicity and/or what would be described as ‘the lolz’ in internet terms, which basically means that greenlighting things as a sort of joke has become a real thing nowadays. Just look at the amazing games that have gotten the green light such as Rock Simulator, Yohjo simulator (I’m looking at you, Sekai Project!) and the like. So, zero quality control, coupled with a guaranteed income through Kickstarter have made it possible for AJTilley.com to flood the Steam platform with visual novels, with their latest creation Highschool Possession seemingly being a throwback to the days of (fanservice) yore. Has the company learned anything from their previous mistakes? Let’s find out.

Before we dive into this modern masterpiece, it should be mentioned that AJTilley has given us yet another insanely overpriced OELVN that can be completed in just over an hour if you are a fast reader, which would probably encompass most of the people who’d be interested in reading an OELVN. In this time, it tries to fit in three different endings and two seperate ‘routes’ (calling them that is kind of a travesty when compared to a quality VN, but it makes the explanation easier, so please bear with it). It would be easy for anyone to spot that this isn’t nearly enough time to flesh out any kind of proper story involving a single heroine, let alone two. Thankfully, the guys over at AJTilley.com are still as clueless as ever when it comes to writing a decent, cohesive story. So, we have another mess by these guys on Steam. 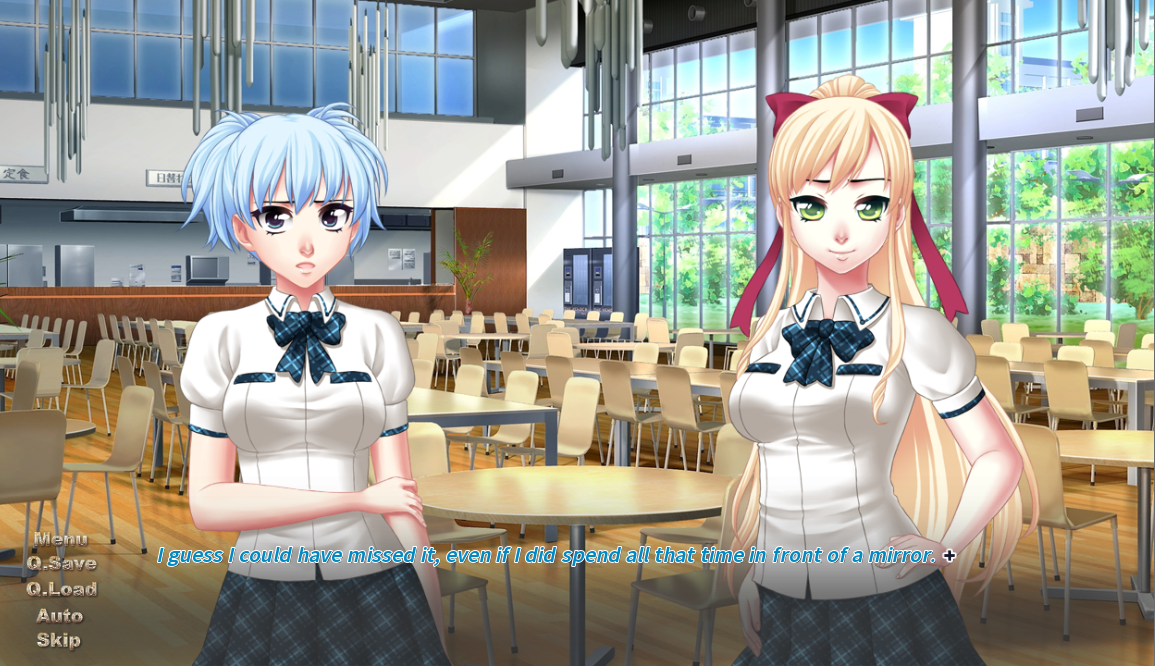 With that out of the way we can look into the meat of this work. We start off in the shoes (or rather, bed) of our protagonist, Hikaru, a guy that’s average in every way imaginable and has a secret crush on two girls he calls ‘school idols’, Akiko and Kasumi. All is well until one day he wakes up in the body of Akiko and Kasumi every other day, switching places between them when he goes to sleep at night. While he’s in their bodies, he discovers that the two girls he imagined to be perfect in every way also have some issues of their own they would much rather not have other people know about. As Hikaru is in control of their bodies, it is up to him to guide the girls through their troubles and find out what is going on with the whole body switching affair.

Once again it can be said that AJTilley.com has created a very interesting (albeit not very original) premise here, with great potential for a gag comedy focused VN with specks of romance. After all, Hikaru can use this unique chance to find out how the girls feel about him. While it can be said that the romantic elements are present, albeit thinly spread, the same cannot be said about the overall execution of the body switching arcs. Yes, Hikaru finding out about their issues is a helpful thing to both him and the girls, as he can help them overcome them rather easily, seemingly more for plot convenience than anything else. In fact, these girls are leading some pretty hard lives, with the game touching on several heavy issues such as suicide and bullying. Sadly, the game only barely touches the surface of these girl’s problems, making Hikaru’s solutions to them and the overall conclusion of the girl’s ‘routes’ feel rather rushed. It’s almost as if the game is making a mockery out of these girl’s situations due to how trivial it seems for Hikaru to dismiss every kind of conflict in their lives. White knighting is at full force in this VN and it is painful to look at. 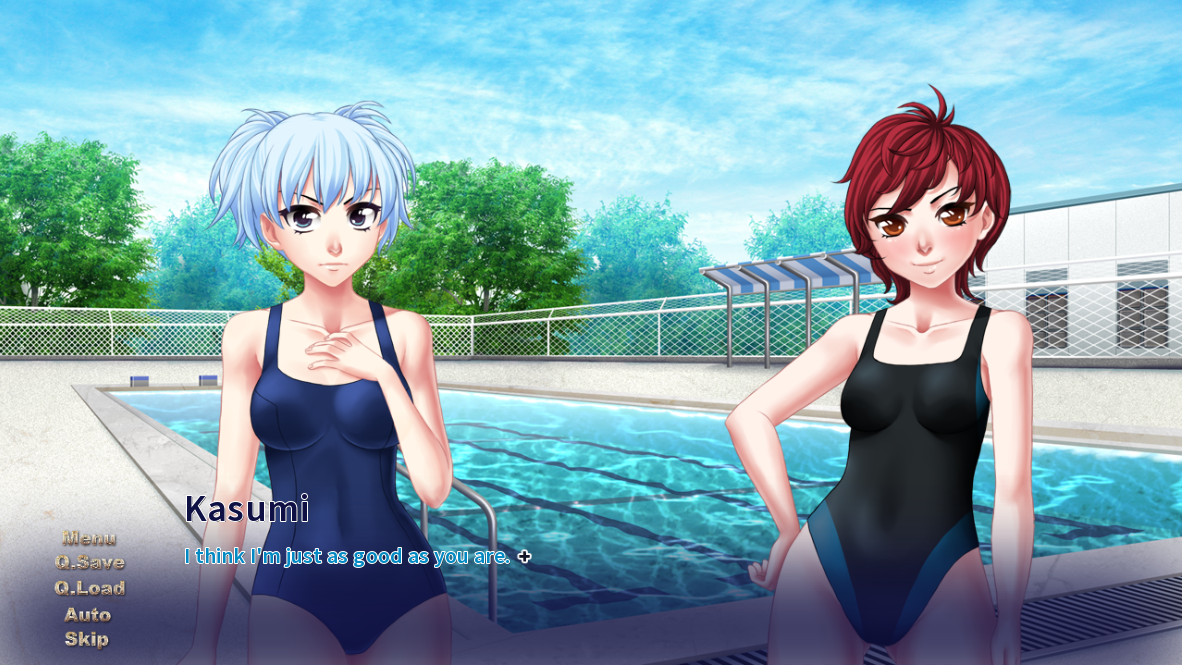 If there’s one thing you can expect AJTilley.com to get right, it’s the music and the art. This is of course because they can’t expect to draw anyone in with their writing anymore, since everyone should have noticed by now how dreadful it really is. Sadly, Highschool Possession scores low marks even here, since the majority of its CG’s are spent on awkward fanservice moments and H-scenes (such as Hikaru touching himself while in Akiko and Kasumi’s bodies, which warranted a CG because… sales?). It should also be mentioned that the game’s censorship on Steam is downright hilarious, cutting off several H-scenes the second nudity would pop into screen (Moenovel would be proud, guys).

The character sprites look okay, but they have a very limited amount of facial expressions, often making them look out of place in certain situations. Even worse is the music, which is boring and seemingly just there to fill some kind of void. All of it feels very uninspired and I bet you will instantly forget all of it the second you close the game. As far as the characters go, Hikaru is just your average self-insertion device with no redeeming qualities except for his decent looks (I guess) and him being… nice. He does have a perverted side, as shown by the pointless fanservice moments he gets while in the girls’ bodies but this isn’t that different from your average high-school guy. For some reason, this dunce gets the option to choose from two beautiful girls which are supposed to be way out of his reach but are both in love with him because the game says so.

Akiko is a Goody Two-Shoes that suffers from being in an emotionally abusive relationship with a guy that’s just using her for sex (interestingly, Hikaru chooses to have sex with the guy while in Akiko’s body, which just seems like a really odd thing to do) while Kasumi is a sporty girl and one of the best performers on the school swimming team. She gets bullied by Rika, a girl that gets no development whatsoever but we’re just supposed to assume she’s no good because once again the game says so.

Both of them are written to be as helpless as possible so that Hikaru can save them from their tormentors and swoop away the girl in the process. Needless to say, the romantic development of the entire VN is stunted with the developers desperately trying to cram whatever romantic elements they could in a five minute epilogue which basically serves as the individual route for either of the girls. It’s a sad excuse for a route, but it’s something we should all have come to expect from these guys by this point. 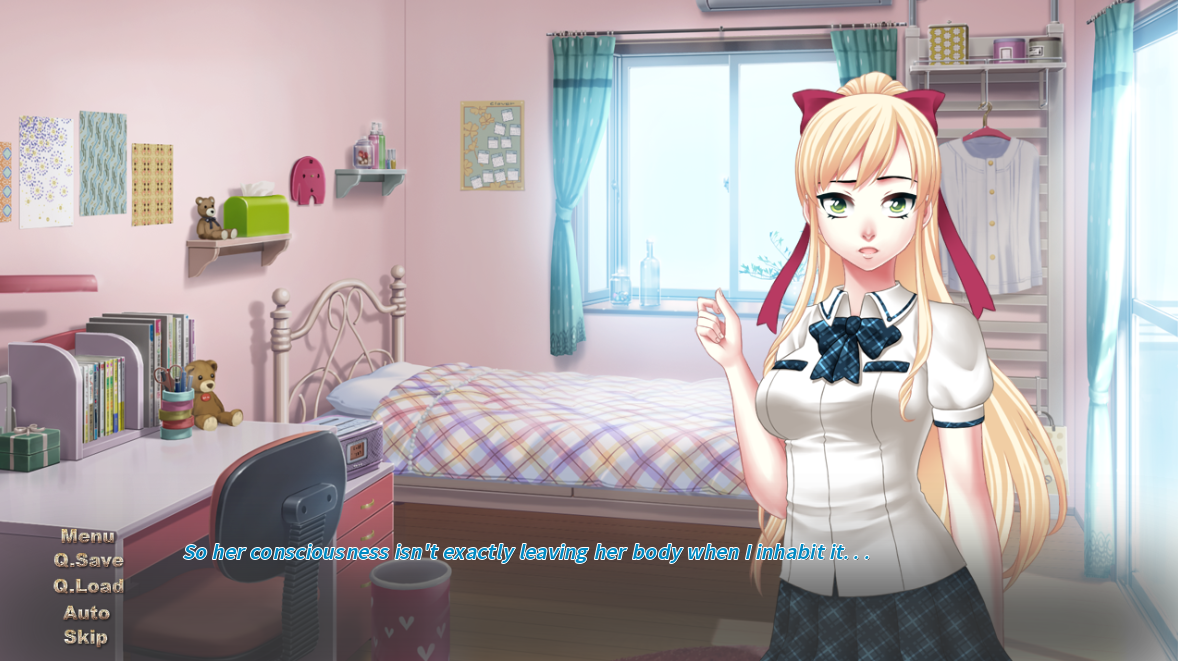 Before we reach the conclusion of this piece, it should probably be noted that this VN never bothers to explain anything that’s going on. Why is Hikaru switching bodies with these girls? Why these two girls specifically? What is happening with Hikaru’s body in the mean time? And most importantly: what is happening to the girls while he’s in their bodies? We’re just supposed to believe that they are consciously living through their day as Hikaru is controlling them and they end up having no recollection whatsoever of him being there in the first place. One day, the entire possession thing just ends, along with the rest of the story. Come on…

So yeah, AJTilley.com has released yet another comical failure of a VN. While it starts off promising, the terrible writing, horrible pacing, cheap fanservice, unlikeable and flat characters along with average art and forgettable music keep it anywhere from even being decent. What the hell happened here? Who even cares? I don’t.

Thank you to AJTilley.com for providing us with a review key!

- Story is all over the place

- Flat characters, no personalities to speak of

- Music is a total snoozefest