Before I start reviewing Sakura Swim Club, I feel I should ask you why are you reading this review. If you’re genuinely in doubt as to whether you should buy this title then this review is for you. If, however, you already have an opinion about this and all the other Sakura titles and only want to feed your own arrogance by discussing it with friends who agree with you anyway, leave. The Sakura series has been the object of an obscene amount of circlejerking recently and I don’t want any part of it. 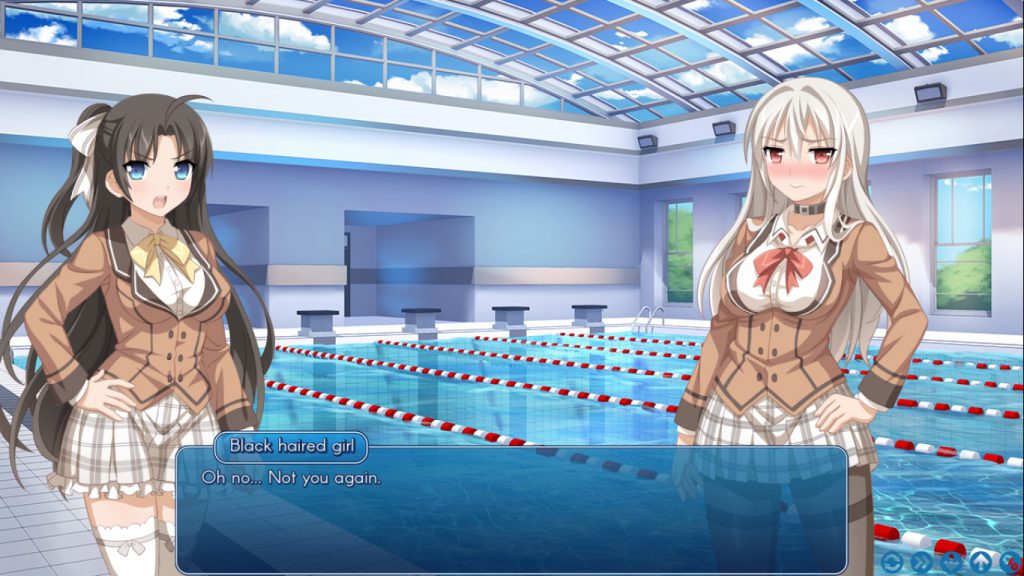 So there you are, in the role of Kaede, a boy who has just transferred to a new school again. His parents are brilliant and successful professionals whose son doesn’t display the potential they’d anticipated who have him jump from school to school in the hopes that one of them might awaken said potential. This makes Kaede feel like he’s living in someone else’s shadow and not bother engaging in any activities, because eh, what’s the point?

As his new homeroom teacher encourages him to join a club – any club, except the swimming club – he becomes more and more curious precisely about the swimming club. Even moreso after meeting Mieko and Hiromi, its only members, who try to persuade him into joining. Even if Mieko is very wary of Kaede’s supposedly perverted nature (and she’s right, since although Kaede isn’t really shown as a pervert, the target audience is people who are. This is a funny albeit irrelevant thing to point out). Hiromi is a calm, observant girl who always seems to know what to say to comfort Mieko. She’s a more embarrassed and neurotic variant of the tsundere archetype. 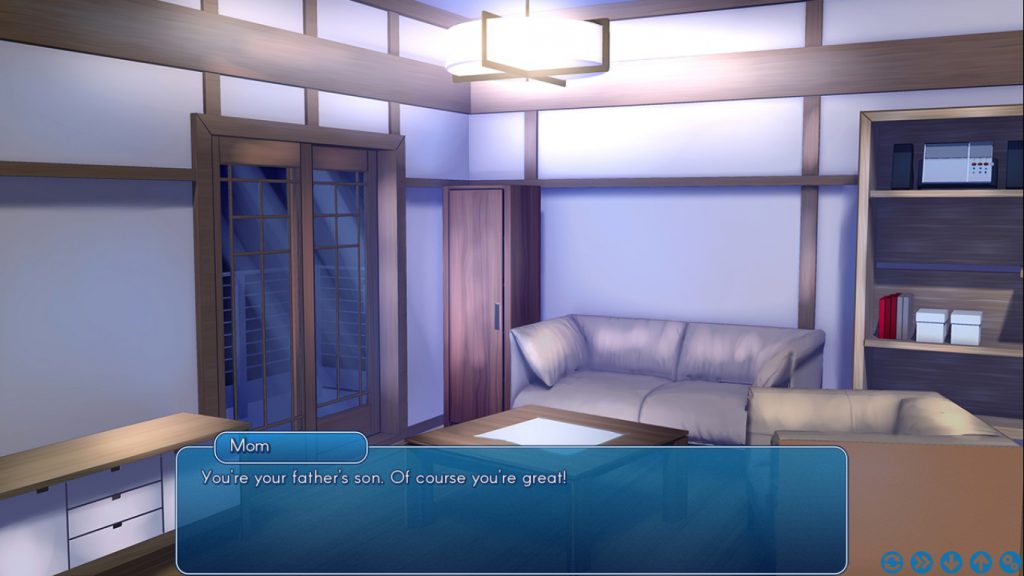 The backbone of the story, then, is set in three places: Kaede’s house is where he juggles his parents’ expectations and his own frustration and doubts; the classroom is a space of intrigue and boredom, where he feels all the less eager to do something about his own life; and the pool, where he actually finds himself having fun and improving in something. And I must say this is a good enough backbone, each passage reinforcing certain feelings and giving the moments of club practice a feeling of relief. Hiromi and Mieko’s dynamic is rather well-built too – Mieko admires Hiromi more than she can handle, always looking up to her best friend and taking advice from her even when she is actually the one who knows better. Because of that, they sometimes end up fighting over small issues – but every outsider, and that includes Kaede and the player, knows they are fighting because they are such close friends. It’s actually uncommon to see a friendship between two characters who are not the protagonist feel so natural.

So it makes it all the more sad that the backbone is all there is to the story. There is a clear narrative impulse – the characters have motivations and things they want and should work on, but this is not fleshed out. It’s true that the high school setting is over-saturated, but there would have been room for a story like Sakura Swim Club’s if it hadn’t been so lazily written. That’s the gist of it – the story isn’t bad, but it’s lazy. Everything gets solved too easily for how grave the issues seemed to be.

Of course, we already know that the point of the story in Sakura Swim Club was never to enrapture the player but to be fertile soil upon which lecherous situations would grow. And, indeed, Kaede gets to know the girls better basically by seeing their panties in increasingly absurd shenanigans he hadn’t predicted. There is a point at which the story basically becomes a sequence of perverted skits, trying to waste as little time as possible to show the girls’ boobs yet again. However, the way the story is, it actually gets in the way of – and I absolutely hate the expression but am going to use it anyway – “Plot”. 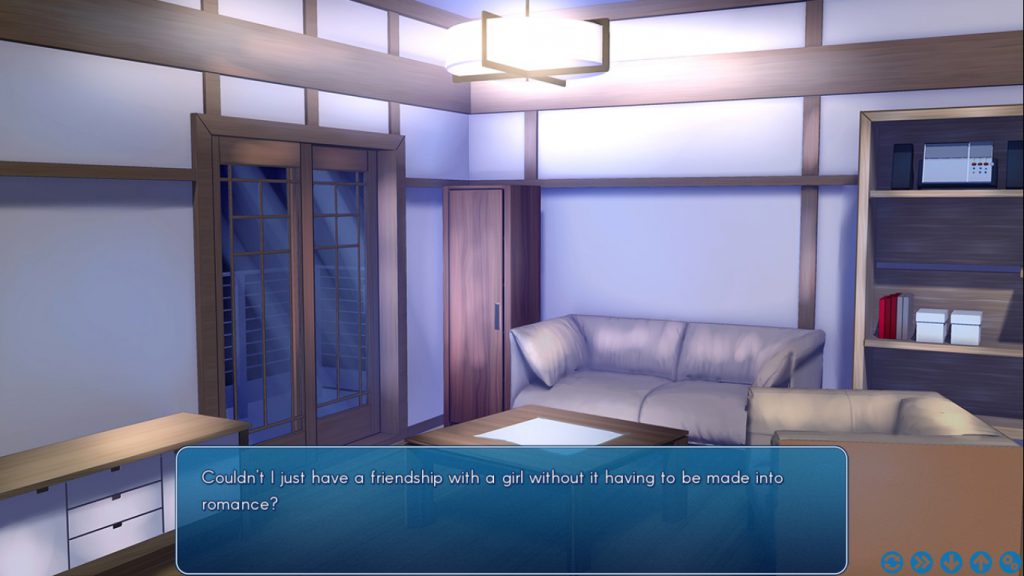 What a visual novel can do that a simple image gallery can’t is to give each picture, each glimpse of the characters, a feeling of intimacy and complicity, a feeling that what’s being shown is being shown just for you. Context is what makes lingerie unacceptable in public but swimsuits okay – lingerie presumes intimacy. So what Winged Cloud is doing is not simply having a lot of scantily clad women drawn, but trying to make the player feel as if they have a kinky connection with them. In other words, it’s trying to emulate that feeling you get when you and your girlfriend are having dinner with friends and are caressing one another under the table using your legs and feet, but no one else notices it.

This doesn’t happen all that often in Sakura Swim Club because there isn’t a lot of harmony between the elements. Story progression and perverted skits are divided by a rather bold line, only rarely intertwining – for instance, a scene in which Kaede and Hiromi talk about a somewhat serious issue but the picture shown is that of Hiromi in a rather suggestive position. When they are not intertwined, you feel either the story or the softcore porn was wedged in, gratuitous and pointless. Either way you’ll end up skipping a lot of stuff as a result. It’s aggravating that all textboxes have only one line of text, too. 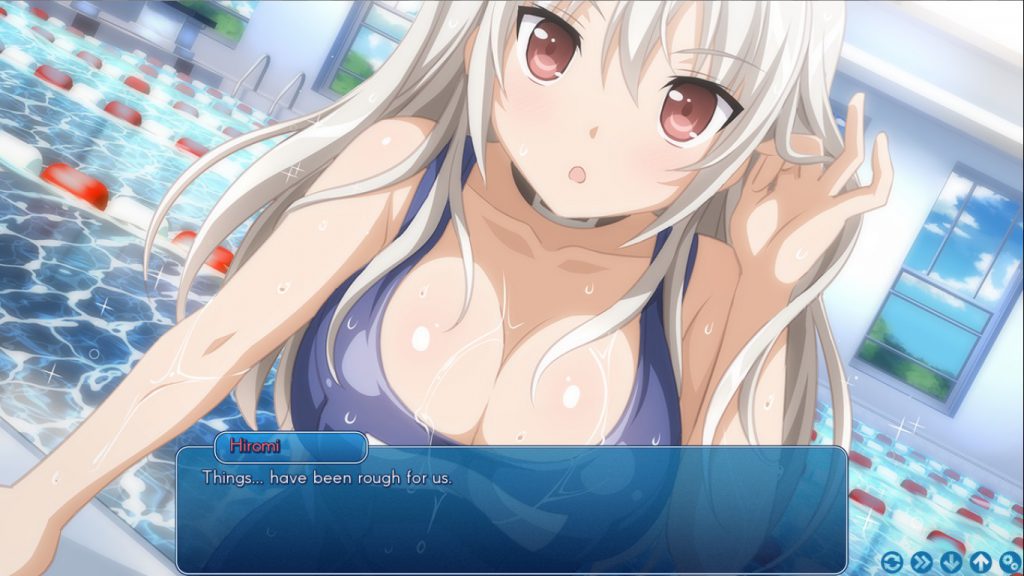 My last gripe is with how the atmosphere and the writing are somewhat out of sync. Kaede may be opening up to the reader and talking about his honest and dire feelings, but the music indicates the scene is happy; the information we gather about some places from the writing and from the art clash, especially Kaede’s room. It’s yet another example of a product Winged Cloud didn’t pay much attention to, not capitalizing on its potential either as a story that will make us feel close to the characters emotionally or as a sequence of kinky scenes that will make us feel close to the characters… in another way.

And the funny thing is that the actual sex ruins both. It’s not what Sakura Swim Club is about and destroys the complicity between the characters, also not contributing at all to the development of the characters. Well, actually Hiromi and Mieko deal with sex as a competition between them, so it somewhat adds to their already interesting dynamic. 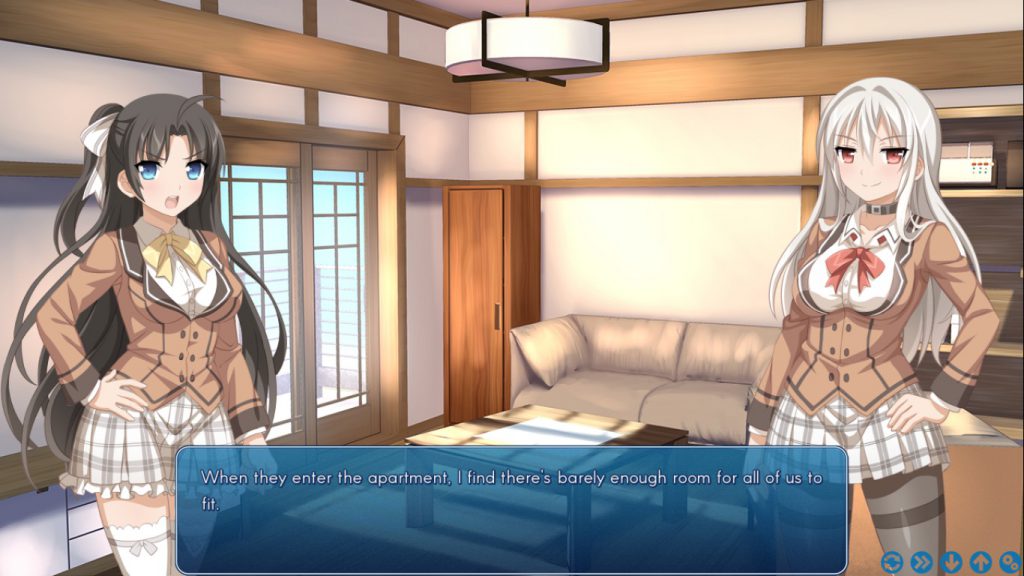 At the end of the day, it’s not a bad afternoon read if the game’s sitting in your Steam library and you’ve got nothing else to do. It’ll get a smile out of you, especially when it comes to Hiromi and Mieko interacting. In fact, if Sakura Swim Club wanted to be a full-fledged story, they would just have to be the protagonists. That not being the case, there are also some provoking scenes. You may have noticed I didn’t mention actual swimming much and that’s because swimming is neither a huge part of the story nor exploited a lot for those who have that kind of fetish. It’s a shame too, because the themes of competition, learning how to swim and finding something you like enough to devote your life to are there, making us wonder if Winged Cloud isn’t actually capable of telling a decent story if they ever try to, without necessarily abandoning their signature raunchiness.

+ Interesting heroines and dynamic between them

- Conflict between potential approaches to the story