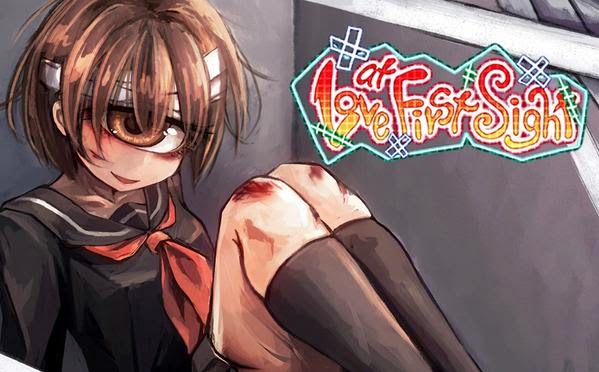 Stop me if you have heard this plot synopsis before. A high school male transfers to a new school where two students quickly become his friends. One of these students is a loud, super friendly, outgoing girl, the other is a calm, collected, sharp tongued guy who has been friends with the girl since childhood. One day, the girl asks the transfer student to go deliver something to a club member on another floor. As the transfer student tries to find who to deliver it to, he hears quiet sobbing. He decides to investigate, and sees the back of a girl on the stairwell. Her clothes are torn in places, and she has a large bandage on her head. The girl turns around, and the transfer student sees her face. In the center of her face is one giant eye. Wait. What? 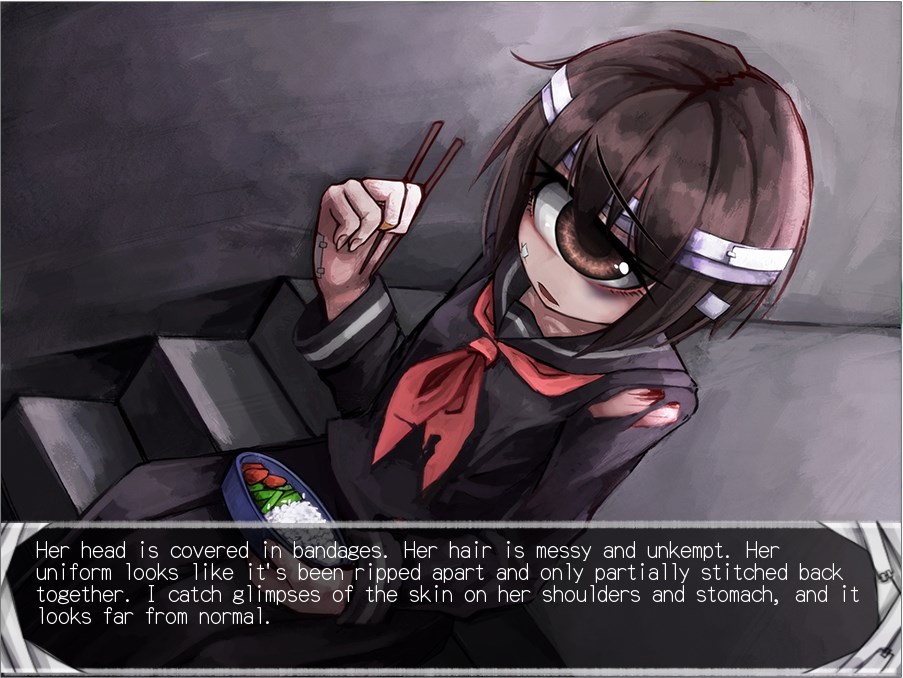 Its a story nobody really asked for, but everyone secretly wanted, Love at First Sight starts off as a cliche romance story but gets a little one eyed twist. Mamarou, our protagonist comes across Sachi, the one eyed girl mentioned above. The set up is as generic as it comes, but can a romantic story involving a cyclops be enough to make this VN worth a read? The first thing that stands out in Love at First Sight (Hitomebore) is the art style. It’s a dark, slightly unsettling style that somehow retains a sense of charm, and cuteness in regards to the female characters. However, the art style isn’t so dark, as to set an overbearingly somber mood, instead adding to the creepiness of Sachi. The developer of the VN is in fact called CreepyCute, which is a good term for the art style. I quickly was able to settle into the art style, and personally felt it added to the atmosphere of the VN. 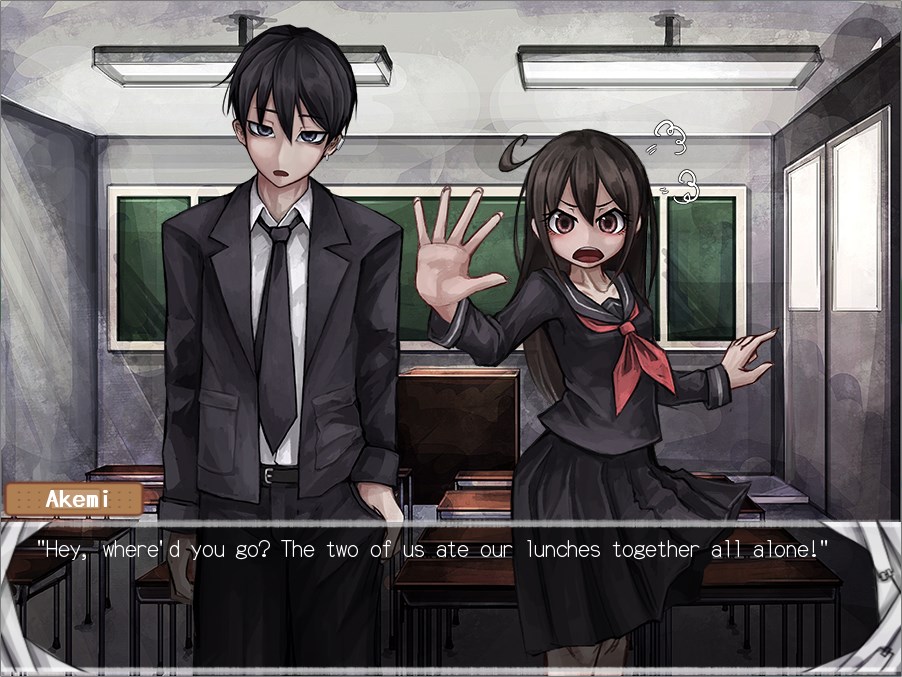 In terms of music, there really is not all that much to talk about. If memory serves, there are maybe 4 or 5 pieces of music that play. None of them are stand outs or memorable pieces, which means on the bright side, the music isn’t memorable for being bad either. It is there, and that is about all I can say about it. Now on to what I care most about; the story. As I stated in the opening, the story starts off about as cliche as it gets. Mamarou, after getting over the initial shock of seeing Sachi, the one eyed girl, decides to start talking to her, and he enlists the aid of his two friends to help him. He begins to slowly unravel why she always looks so disheveled and bruised. As he begins to learn more about Sachi, he finds himself beginning to fall for her. It’s a cute little love story that does not really become unique. The relationship between the two progresses just as you would expect from a VN with a nice guy protagonist and a very shy girl. Aside from Sachi having only one eye, there really was not anything else that stood out. There was no “twist” moment, or any unpredictable plot elements that showed up, and the only conflict we see in the story involves a bully who’s character done about as well as a bloody steak (In other words, not done well at all). 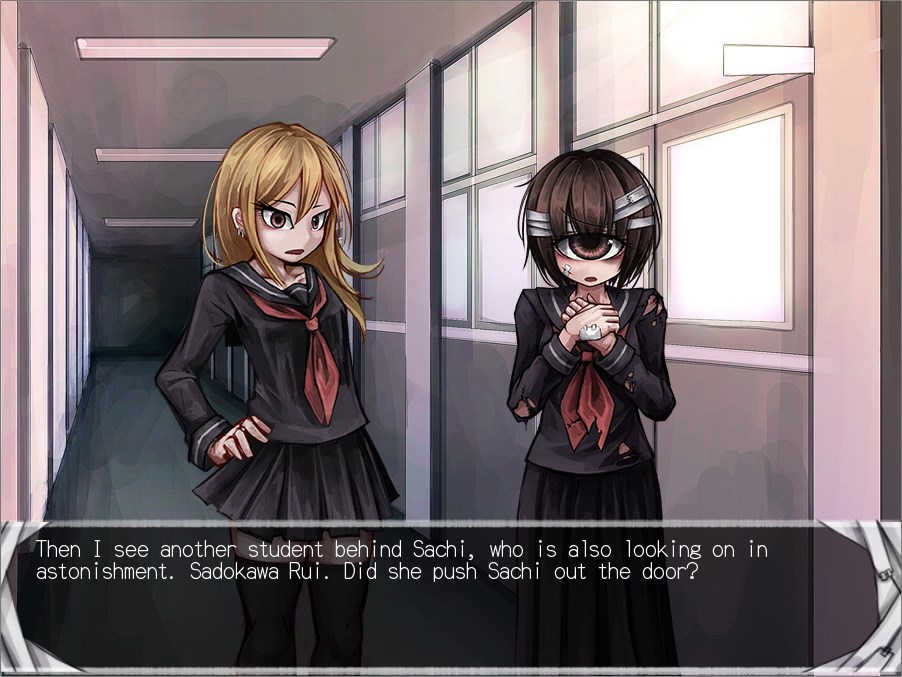 In fact, all of the characters are very one dimensional. We have the quiet cool friend, the loud, outgoing friend, a shy quiet one eyed girl, and a white knight protagonist who is overly nice, along with a bully who has no purpose other than to be the foil to the other four characters. The only other character is Sachi’s aunt, who I personally wish we saw more of. Her character to me, was the most interesting of the bunch. I found myself wanting to know more about what it was like raising Sachi, and how she dealt with a lot of the hardships that are only hinted at. It was a missed opportunity, that would have added a needed layer of depth. There was very little character growth unfortunately. Sachi was the only character to see any sort of development, and her development was very predictable. On a technical level, the only issue I really had with the novel were the scene transitions. For a transition, the screen will go black, or show nothing but a background. The first time it happened, it took me about 30 seconds to realize I had to actually hit the enter key (or space key) to advance through the transition. A simple fade effect would have been a better choice, instead of faking me out into thinking there was supposed to be dialogue when it was simply a transition. Love at First Sight is by no means a bad visual novel. It will take a faster reader about 2 hours or so to finish, and for the price point of $10 USD, I am not convinced that it is worth the price of admission. The VN does nothing new, and is just a standard high school love story between a nice guy and shy girl who just happens to have one eye.

- Short for the current price