Home » Reviews » Shinikiss, or “Why Shizuku is a God” 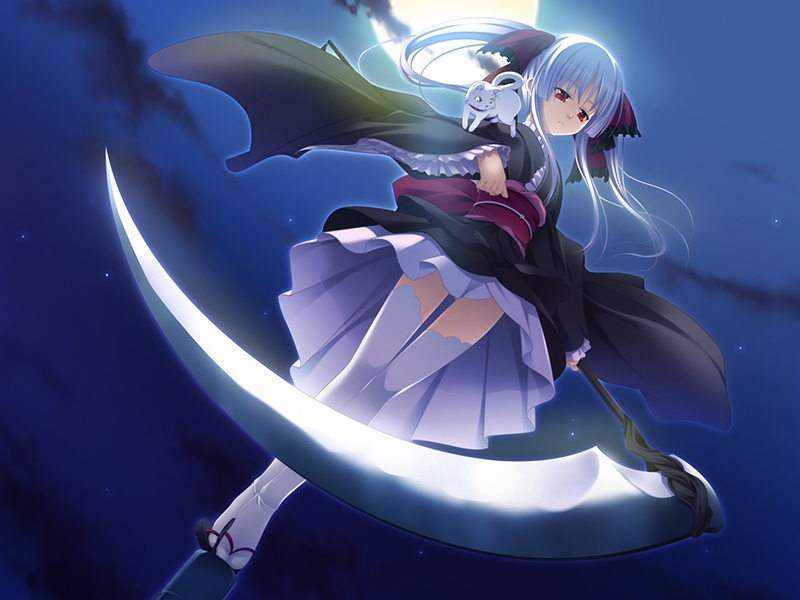 A shinigami, translated as a “Death God,” is tasked with guiding the souls of those who have recently died. Typically, if one is able to see a shinigami, it means that their life is quickly coming to a close, and they too will be given the choice to go to the afterlife with no regrets…or remain on Earth and roam indefinitely, plagued with regret for the rest of their miserable existence. This would typically strike fear in many people, but not Amamiya Makoto – to be honest, he couldn’t care less. This is his story.  This is a spoiler-free review.

Will the shinigami come and take his soul? Does anybody really care? Probably not.

Shinigami no Kiss wa Wakare no Aji, translated into English as “A Reaper’s Kiss Tastes Like Farewell,” was released in 2009 by Alcot Honey Comb, a child company of Alcot. This is a 20-hour game that is split between three heroines – the Class President classmate and video store co-worker Honoka, the 2ch darling non-blood-related younger sister, Shizuku, and a shinigami, Kohaku.

Shinikiss follows Makoto, an overly serious student who tends to keep to himself. He apparently has a mysterious aura about him, as a number of different girls have asked him out, all of whom he rejected. However, the reason for the rejection isn’t something many know about. When he was a child, Makoto had a childhood friend and first love who he spent virtually of his time with: Hiyori. While they were playing at the beach one day, Makoto lost an item that was very special to him in the ocean, and attempted to swim out and reclaim it. However, things don’t go as planned, and he very nearly ends up drowning. Hiyori ends up saving him, but ended up dying as a consequence. Never quite able to get over losing Hiyori, Makoto becomes very detached from life to the point of not caring about death. 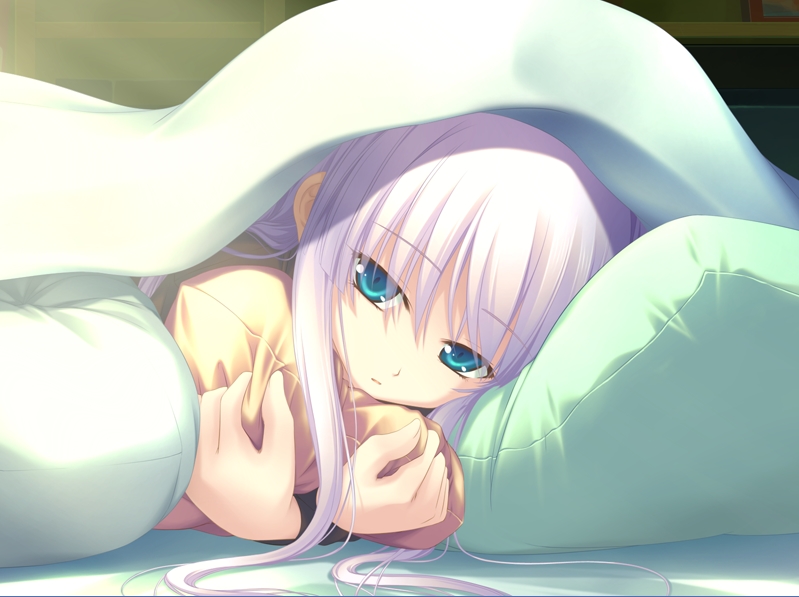 How many double-takes would it take for you to realize she is indeed sleeping next to you?

One day, a classmate of Makoto’s confesses to him, which he promptly rejects. Afterwards her brother approaches Makoto, asking him to reconsider and at the very least be her friend, which he then agrees to. Around this time Makoto notices a girl wielding a scythe, who promptly disappears. That same night he sees her again, this time performing a sending ritual. He questions her, to which she responds: “You can see me? That means you’ll be dying soon.” After that, Makoto’s normal, boring life is turned upside down as the Shinigami starts to follow him around and study him. The common route runs about ten hours, which is probably twice as long as it should be, and the remainder is split over three routes. 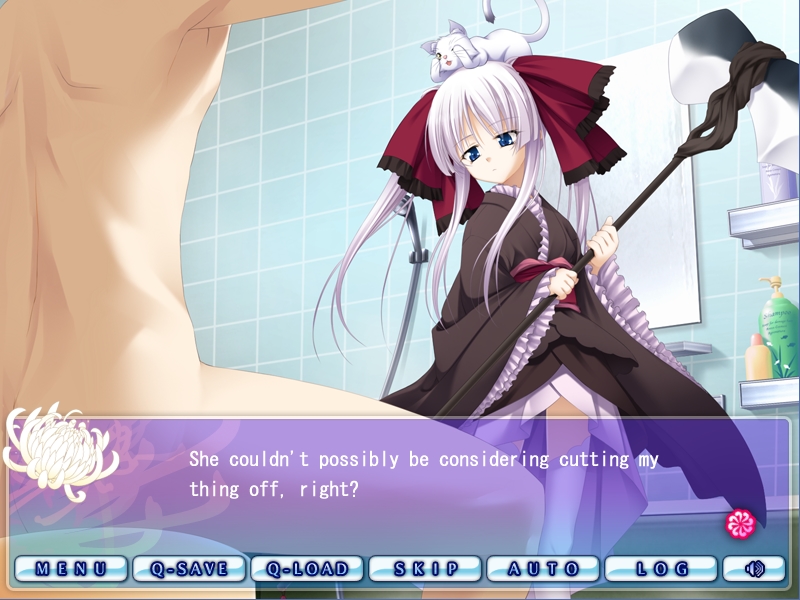 Shinikiss has a decent story, but there are LOT of questions that remain unanswered, and this will turn off a lot of people from the game. In an attempt to wrap up all of the loose ends, the writers try to, in thirty minutes, shove massive amounts of text down your throat. To be perfectly honest, it left me even more confused. It just doesn’t work. What does work though are the H-scenes, which I found to be pretty good, actually. There is also a good bit of comedy thrown about here, which is a good touch to what could otherwise be a very boring common route. Speaking of the common route, very little happens after a key event, and frankly all of that is useless excessive chatter that could have been taken out entirely without anybody noticing the difference.

Shizuku is the saving grace of this game, hands down. She is a modern tsundere who literally drops a billion hints, and when she gets a blockheaded answer, she just carries on without even skipping a beat. She takes a major part in all of the routes, being Makoto’s step-sister, and is actually a really deep character with her insights. She’s also quite the realist. I could do a rather large character analysis on her, but the short version would be “While she has a cold, uncaring exterior, the amount of passion and caring she has for her brother is unrivaled.” 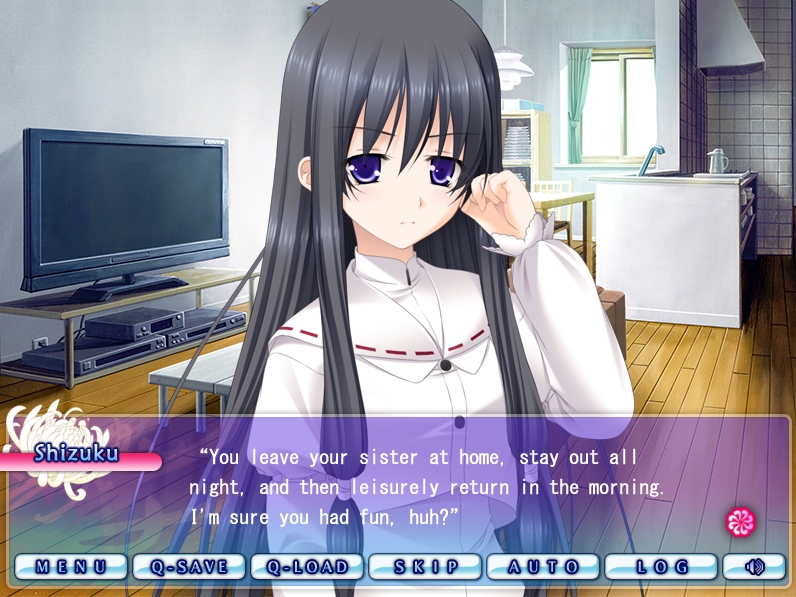 Those eyes are literally saying “Choose the wrong answer and I’ll kill you.”

The graphics are great, and even the H-Scenes don’t suffer a loss in quality. The artist took a little extra care to make a good product. The soundtrack for the game is mediocre, boasting mostly generic upbeat guitar tracks and bittersweet piano tracks, but it doesn’t deter from the experience either. The voice acting is also rather plain, except, once again, for Shizuku’s. Similar comments can be said for the translation quality – it’s good, the editor did a good job preventing errors, but there was nothing outstanding – not a jab at the translators themselves. The quality of the original writing is very likely the culprit. Hell, even Cypheriad, the Editor/QC for the fan-translation, said “You who have waited two years will merely have waited to be disappointed…” (Source).

While I wasn’t entirely disappointed myself, Shinikiss ends up just being an average game with a mediocre story. If you like a good imouto route, or shinigami, or just want a short game you can play between some better pieces, take a look at this one. You can pick it up prepatched from Fuwanovel, or you can pick up the patch Here. 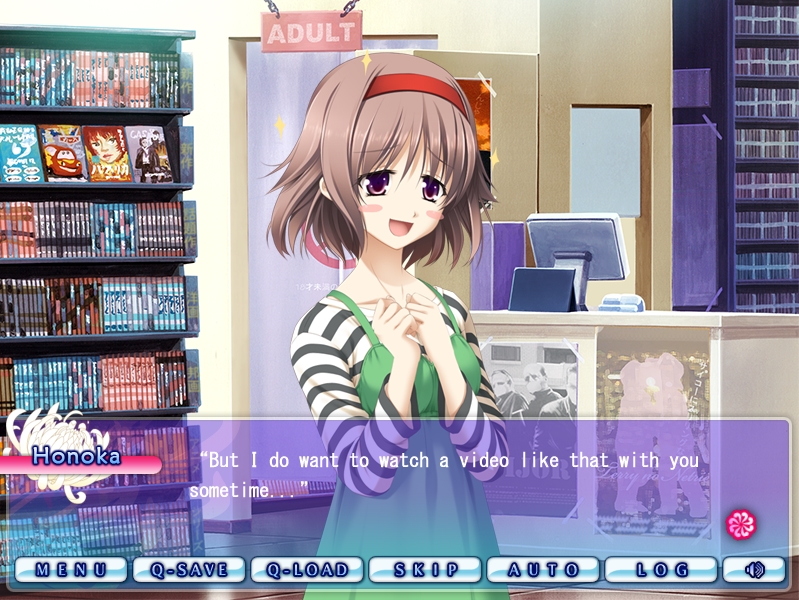 “You want to watch Tentacle Futas Gone Wild! 3? Cause that’s the disk in here…”

~Thanks Zakamutt for helping with this!

- Common route could have been cut down by 2-3 hours

- Characters other than Shizuku are pretty bland