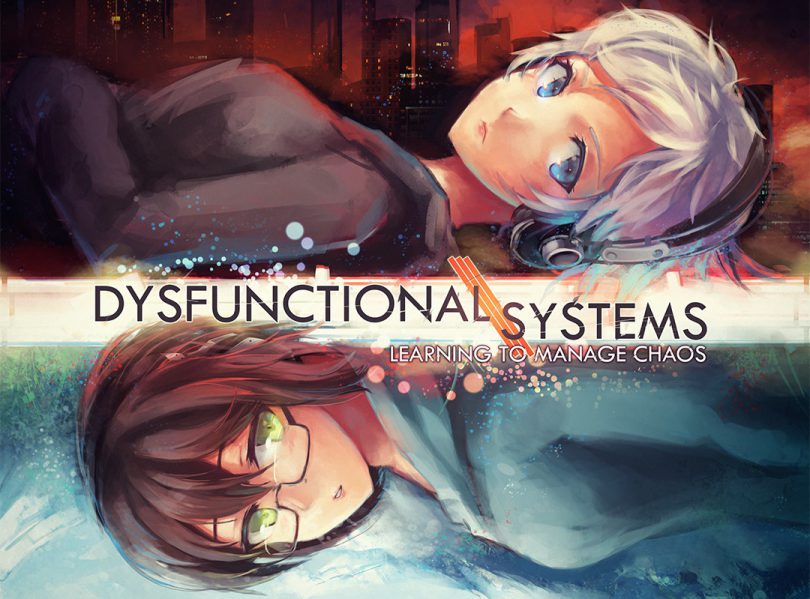 Like a good science-fiction short story? OELVNs might have some in stock for you.
The games I read for this month were all very short ones, so I’ll run through the three of them in one review. Today’s menu: space-opera (at least an embryo of one), androids and time-travel. A fairly classic yet exciting program, if I may say.

I first intended to do a full-fledged review of Dysfunctional Systems, Dischan Media’s latest project, explaining in details why I think it’s a very promising title. Irony of fate, the day following my readthrough of it saw the announcement that the project was being abandoned for various reasons.
This set me back and obviously changed my point of view on it. I still think it’s worth reading as is, while keeping in mind that it will stay an incomplete project, but I was really disheartened to learn the sad news.

Dysfunctional Systems tells the story of Winter, a young girl who’s under apprenticeship to become a mediator, someone who solves chaotic situations in other worlds. In this first episode we follow her being under the guidance of a mediator with a dubious reputation, Cyrus.

I already said that, but I think DS held a vast amount of possibilities. Maybe the too high expectations of people like me were a cause of the breakdown of the project, though. But had I played it earlier, I would gladly have pledged to the kickstarter and heralded it as an OELVN that could both show the difference between occidental and japanese visual novels, and be one of the flagship titles of the media.

A first reason for that is that Dysfunctional Systems pertains to space opera, a genre that is pretty much non-existent on the japanese side of VNs. Despite its shortness, episode one hints, through what I’d definitely call a clever narrative, at a vast ensemble of universes full of possibilities and numerous interesting concepts. Politics? Social reflections? Magic? Adventure? Friendship? Coming-of-age? We got you covered.
The fact that all of this is done in a fairly prolific and efficient prose is all the more pleasant. I’d also add that the simple fact of adding a “codex” already showcases the desire to build a credible and sturdy universe, while keeping the narrative tight (yes, I love codex/glossaries/etc in my visual novels).

This richness is really what I enjoyed the most about this game. I know some have highly praised it for its above average production values too, and although I’ll agree that some of the illustrations are fantastic, I didn’t find the in game assets all that groundbreaking. My lack of knowledge of OELVNs might be showing here though. I’ll gladly give the OST a good mention though. It’s included for free when you buy the game, and after listening to it again it’s really nice.

With that being said, episode one is not just a pile of never-to-be-exploited promising concepts and good artistic assets. It IS, in itself, a pretty interesting and thrilling short story worth giving a try at, touching on a few interesting subjects that you’re not likely to see on the japanese side of things. But as you can see, a big part of the excitement came from the promises of something truly great, beyond the scope of a simple short story.

I’m not giving a mark here (not that I care very much about marks), given the circumstances.

That Cheap and Sacred Thing

Androids are a pretty damn fascinating concept. Ever since Asimov’s seminal novels and short stories on the topic, they’ve been forming a major theme of science-fiction stories, and they’re not likely to stop any time soon considering how much can be done about it. Science-fiction is of course heavily influenced by the current state of science and society, and as we see the focus of the real world shifting, fiction shifts too: science-fiction stories dealing with outer space have become more scarce, whereas androids ones are still very much flourishing.

That Cheap and Sacred Thing, directed by carosene and available on the Lemma Soft forums, is a short OELVN (less than an hour) that waves its own tale on the theme. It follows Autumn, an adolescent girl who used to have a deep relationship with her android playmate and babysitter Elly when she was a child. Now it’s her seventeenth birthday, and her friends pushed on her a strange gift: a prostitute robot.

TCAST is a pretty touching story. It’s written in a fairly straightforward way to lead to several emotional moments. Not just the writing, there are also one or two CGs that are placed precisely at those emotional moments and very effectively reinforce them, which is in my opinion a good display of the use of artistic assets. I don’t have much to say about the art or the music of this game, essentially good but utilitarian, except to mention this, which marked me.

Aside from the emotions, the story also gives its own jabs at a few of the myriads of themes and questions that come with androids, and I have to say it’s pretty interesting. Developing my own thoughts on the topic would be out of the scope of a review and come with spoilers, so I’ll refrain from commenting further, but if you have the slightest interest in robots science-fiction stories, simply read it and see for yourself. The author included thoughts about several things in the game, and they’re fairly interesting reads too that expand on the reflections the story leaves out or don’t straight out spell out for the narrative’s sake. Don’t forget to read those!

All in all, I don’t think you can possibly waste your time with a cute robots love story that also dives into some thoughtful considerations.

“Day before yesterday I saw a rabbit, and yesterday a deer, and today, you.” This sentence probably rings a bell if you’ve read Clannad.
It is a famous line from Robert F. Young’s short SF story The Dandelion Girl, which has been adapted into a visual novel by /jp/ Project. It tells the story of Mark, a man in his forties, away in a cabin in the middle of a wooded area for his vacation. One day, he encounters a girl whose hair is the color of dandelion, and who tells him that she came from the year 2201.

Like most SF short stories, The Dandelion Girl focuses on one single concept, one single idea, to bring it to its full power. All in all it’s a very short – less than half an hour of read – love story mingled with a bit of time travel. It’s pretty sweet, well written and well constructed.

Now the question is, what does the adaptation to the visual novel format brings to it – aside from bringing such an old and not that well known short story to the attention of players? Well, to be honest, not that much. The backgrounds are simply heavily modified sceneries, and while the few sprites aren’t bad, you can’t really say that they’re used in a groundbreaking way. Same can be said about the music. I guess it really comes down to the desire of transposing a story you like into another media, and expanding its reach. Why not?

I’d recommend giving it a try, it’s not like half an hour of your time could possibly be a waste. It’s a pretty good story, although ever since its original publication (1961) we’ve seen much more time travel fiction be published, and thus been exposed to more complex stories. Its simplicity makes a part of its charm, I’d say. Worst comes to worst, you’ll have an opportunity to shine in conversations about Clannad with your trivia.