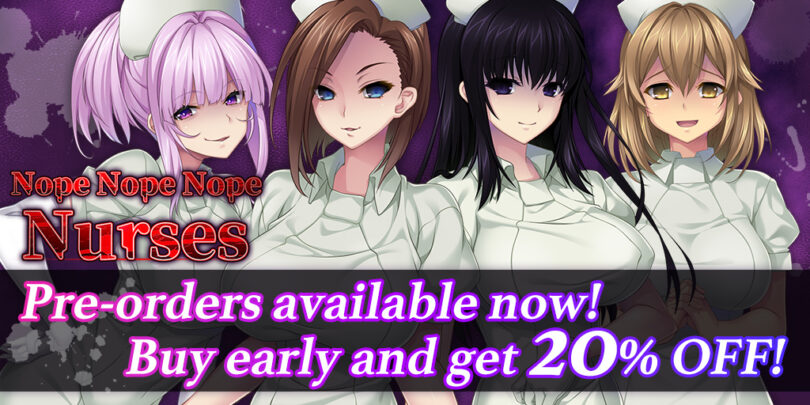 Publisher Shiravune has announced on their twitter account that the sequel to last year’s Nope Nope Nurses, appropriately titled Nope Nope Nope Nurses, releases in just two weeks, on January 20, 2023! The game will launch in both English and Chinese. Hot off the heels of last month’s Otome*Domain comes this next ADV nukige.

Shiravune releases all their games at a standard time, 10:00 AM JST, so those outside of Japan will get to play this game a little earlier.

The protagonist, Yamada, has once again found himself in a sticky situation, stuck in a hospital with three brand-new buxom nurses who will stop at nothing to… ‘cure him’!?

Yamada falls into the clutches of the “OG Three,” a triple threat of veteran nurses!

■ Meet the sinister trio that even the other nurses fear!
“Begrudging Nurse” Tachibana, “Insidious Nurse” Kurokawa, “Violent Nurse” Yamaguchi, and “Demotivational Nurse” Hiramatsu.
Just like the rumors said, this hospital’s got nothing but nurses with the worst personalities.

I had no idea there could be anybody worse than them!
These three aren’t just nasty… They’re pure evil.

Some are obsessive, some wicked, and others unpredictable.
They’re the absolute worst—and that’s what makes them the best!

■ A Story That’s Gaining Speed!
Man, all I did was break some bones and get hospitalized.
And yet everyone treats me like the scum of the earth!
Plus, recently things here have been feeling off.
Like there’s a dark cloud hanging over you no matter where you go…

Nope Nope Nope Nurses and its prequel were developed by Dark One!. The Shiravune staff for this release is yet to be confirmed.

Shiravune confirmed via Twitter that pre-ordering from Johren will net you an attractive 20% off discount, bringing the price down to 9.59 USD from 11.99 USD! (R18+)

In addition, the original Nope Nope Nurses is currently on sale, only on Johren, for 50% off, bringing the price down to just 9.99 USD from 19.99 USD! Anyone interested will want to act fast, since this sale only lasts until January 10 JST.

The Steam versions of both games require a free 18+ DLC patch from Johren to restore the ero content.