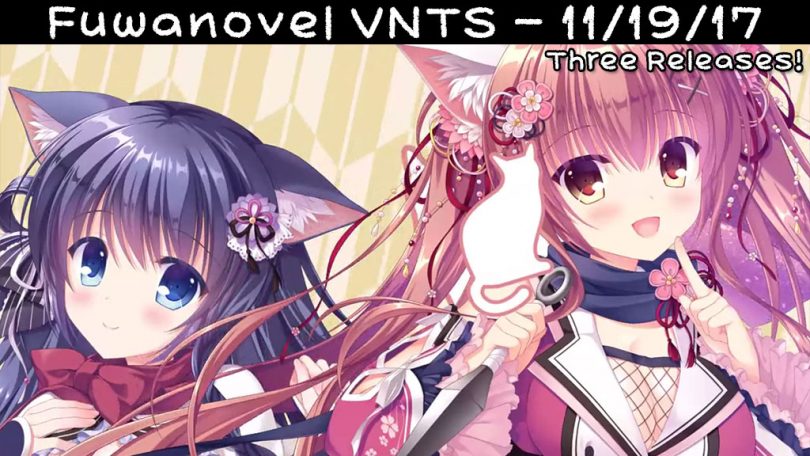 This week’s header image comes from Neko-nin exHeart +Plus, one of this week’s releases. Check out the other releases (Kuroinu Ch. 2 and Umineko When They Cry Chapters 5-8) below.

From The Team:  Sup all? We have four new announcements this week, which is pretty exciting, and a ton of other updates! A solid week all around.

Zakabox™ 「 … 」- Zaka expended all his energy on commentary last week so he’s back to hibernating through the harsh Swedish winter.

Decay’s MusingsIs it weird that I kind of want to play that Newton game? I hope that’s not weird. Wait, it is weird? Shit. Well, I still want to play it anyway. It seems cute and fun. I hope Sol Press does a good job with it, but I’m still a little guarded until they release something and prove themselves.

And it’s safe to say that we should be more than a little guarded with “A Sky Full of Stars.” Miagete Goran is a game I’ve been interested in since its release, but it’s hard to be excited about a MoeNovel release after what they did to Konosora/If My Heart Had Wings. I’m sure you understand if you played that. IMHHW’s translation wasn’t pretty.

Some people seem confused as to what exactly MoeNovel is and is not, so I’ll try to lay it out. MoeNovel is not a translation company. MoeNovel is a brand established and managed by Pulltop where they release their games in English. To do this, they hire an actual translation company, Active Gaming Media. This means that contrary to some rumors I’ve heard, MoeNovel is NOT an AGM front. The difference is murky, because in addition to translation, AGM does the web design and PR for MoeNovel, but in the end of the day they’re contractors hired by Pulltop.

So what is AGM? They’re an agency. Agencies are different from licensing and publishing companies as we know them. They don’t publish anything themselves, and are instead contracted to work on games for other companies, and then subcontract out actual localization duties to their staff. AGM’s staff is very large and varied in quality. In effect, AGM is like a localization slot machine. You get a different combination of results with every pull of the lever, with the odds of coming out ahead being heavily stacked against you.

Konosora ended up with triple duds. The weird LoveKami releases were more like triple cherries or something. They had some okay staff on it, but also some not-so-okay staff, and the results were mixed. Miagete Goran/A Sky Full of Stars may not be a total dud like Konosora was, but that’s the thing, we have no idea. It’s just another pull of the lever where literally anything could happen. I’m not too excited to see the results, knowing how badly weighted they are against us.

In other news, it’s pretty cool to see Hoshimemo’s beta go out to kickstarter backers. Apparently this is basically a finished and polished translation, as far as I know. I’m sure they’ll fix whatever text issues backers find, but otherwise this is a full release for them. The comparisons I’ve seen against the old fan translation have been pretty positive. NowItsAngeTime posted a spoiler-free comparison on Fuwanovel of the fan TL and the SP release, check it out.

And finally, SeaBed is getting a December 19th release. Fuwanovel got an early review copy, which we gave to Zaka (for yuri, who else?). He’s been tweeting about his experiences on Twitter, and will be posting a full review once he’s done with the game. I’m looking forward to it.

Hope you all have a good week!