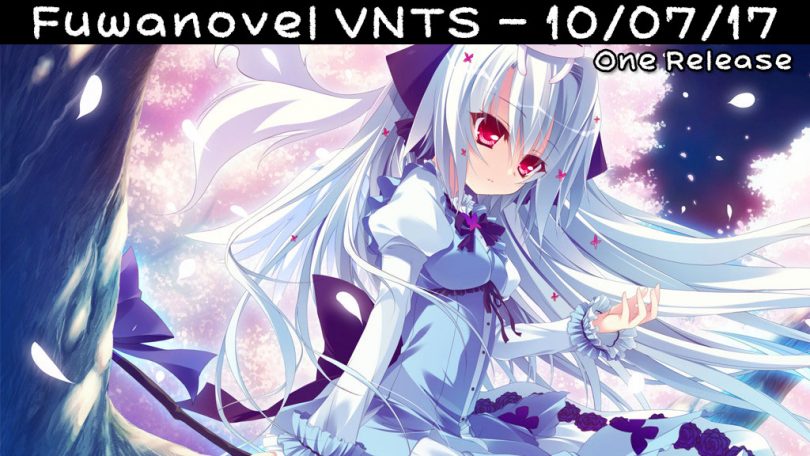 From The Team:  Another Friday, another week, another VNTS. We’ve got one release this week (KoiSaku on Steam and an 18+ release on Denpasoft) and a few project updates. Take a look and let us know what you think in the comment section. One big change this week: we’ve removed percentages from Sekai Project’s games. This follows their decision to stop posting regular project updates. (I can already imagine the confused and angry emails I’m going to get this week. Just remember, guys: we’re only the messenger.) Lastly, I wanted to thank Decay for his help handling VNTS last week so I could go and do research/volunteer work. – Tay

NOTE: Tables appear to be missing. We are aware of the issue and roughly know how to fix it. We’ll get on it ASAP.  We’re still cataloging all the changes, so at least you’re not missing any news. Sorry for the inconvenience.

Zakabox™ 「It’s a bit weird to say that nothing interests me all that much this week when we have a major release, but there you have it. Sakusaku, yet another lagom moege, has hit the scene. As seems to have become all too common for SP releases (to be fair it’s not like MG doesn’t have to patch things either) there looks to be some lingering bugs, though at least a patch fixing some of the issues went out yesterday. IIRC there’s also a way to change the font into something prettier if you use an unofficial patch by Doddler, so look into that if you’re interested.

Amagami is edging ever closer to 100%. Anyone know how much of the other work is done regarding that? I think we all know how delayed things can get sometimes.

And… well, there really isn’t much else this week I guess. F/HA voices makes me feel very conflicted because I’m becoming elitist enough to want to read it in Japanese, but I doubt the voice port will work on that, and if I went for the vita version I’d both have no-porn sadness and no text hooker problems.

If anyone’s interested in my JOP adventures I finished Shimaisou not so long ago. It’s a dark and deliciously twisted story, and the romance feels surprisingly intense in something so ultimately bleak – perhaps because the light shines brighter in the darkness? I can’t recommend it if you like happy anything, and the pacing can be… weird sometimes, but if you’re into the doujin aesthetic I think you might enjoy it.

If you’ve been living under a rock, Doki Doki Literature Club is pretty interesting (though not for the faint of heart) and now available on Steam as well as itch.io. I’d have mentioned it when it actually released, but as it turns out Saturdays are great for doing university coursework. Or something. If you haven’t been living under a rock, a spoiler-ish fuwareview of DDLC also went up today.

Oh yeah, and if you’re into hard SF read Peter Watts’ Blindsight already. It’s great, and available for free from the author himself. I just lay about doing nothing for an hour, integrating it, after finishing. It’s that good.」

As Tay mentioned above, we removed SP’s progress percentages this week. With months having passed since SP took their tracker down, those percentages were all wildly inaccurate and misleading. All the projects we know to have been fully translated are listed as such, while the rest are “TBA,” basically indicating that we don’t currently know what’s up with them. We’ll still keep track of all public statements made on the progress of their various projects, so don’t worry, we’ll keep you in the loop. Similarly, I’ve removed Island’s 50% progress since its vague delay announcement kind of supersedes it (we don’t know the actual percent and it’s releasing alongside the anime either way), and I placed a caveat next to the Angel Beats progress.

I also took the liberty of removing “Nora, Princess, and Stray Cat” (Nora to Oujo to Noraneko Heart). I’m not convinced there’s actually an English translation in the works. Maybe it was something some guy at Haruzake really wanted to have happen, but in the absence of any official announcement and no news whatsoever in the 17 or so months since the postcards were spotted at AX 2016, we decided it’s not worth keeping on the list. We can always add it back if it does pop up again in some form. Also on watch are Himawari to Koi no Kioku, Love Sweets, and Harumade, Kururu. Those three have at least had official announcements made, which puts them on more stable footing than Noratoto, at least. But don’t be surprised if they get the axe when it comes time for the new years cleanup.

HemoImo (or “My Little Sister Can’t Possibly Have A Hemorrhoid?!”) is also in a rather strange spot. Its pre-release page’s removal from Steam was abrupt, and there’s been no official explanation given from anyone. SakuraGame, the publisher, is the epitome of shady. They aren’t to be trusted in anything they do. Their English translations thus far have all been horrid machine translations, and they’re very likely in violation of China’s anti-porn laws by selling the games in China (the Chinese are their biggest audience by far). The entire premise of their company is illegal, and they are wrecking the eroge market in the process. HemoImo was different since LyricBox (the developer) convinced SakuraGame to use Cafe’s translation. I only hope that both LyricBox and Cafe (and his team) don’t get too screwed over by whatever just happened.

In other news, next week I shall be writing this column from a new computer! After seeing how well the new Intel CPUs were performing and having suffered enough on my current ancient machine, I went ahead and pulled the trigger on a 100% all new PC build. RIP $1200, and hello efficient computing for once in my life! What about you guys? AMD has been disrupting the CPU and GPU markets pretty heavily in the last year or two, and the results have been paying off with some great hardware advances. Any of you taking the opportunity to upgrade as well?

[Note: Tables may be broken when you read this post. Oops! We’re working on it. In the meantime, just imagine all the things I said were true.]