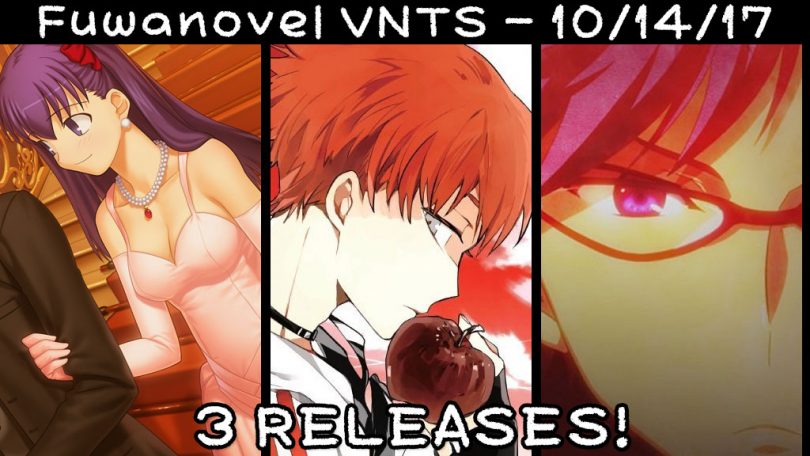 From The Team:  Tables are back! Woot! Time to party hard and play some Fate/Hollow Ataraxia with the shiny, new voice patch. That, or try one of the other two releases this week: Bad Apple Wars (on Vita!) (try this one!) and Chaos;Child (Europe only, US coming in November). -Tay

Decay’s MusingsI got my new computer Thursday, and man, does it feel good. I broke this bad boy in with the most intense game I had: Muv Luv Alternative. You wouldn’t believe the frames per second I’m getting on it. I can skip from start to finish in a matter of minutes. Oh, it also runs Shadow of War pretty well I guess, but I only tried that for an hour or so.

Pretty excited for Chaos;Child. I might give that a shot after I’m done with MLA. I haven’t actually read much of Chaos;Head, and I’ve heard very conflicting things on how necessary C;H is for understanding C;C. I was planning on waiting until Noah was translated but I don’t think I have the patience for that. I figure that if a quasi-sequel released years later isn’t easy for newcomers to understand, the developers really something up along the way (especially with an all-new main cast).

Also, congrats to the Hollow Ataraxia voice patch team on their release! Yeah, it’s not a translation patch (we’ve already had an HA patch for a few years), but Tay is a mega Fate fanboy and couldn’t resist adding the project to the list. I’m almost sad to see it go. It’s been on our list for so long.

Oh, and I don’t want to leave without mentioning Bad Apple Wars. I doubt I’ll be able to play it, but I’ve heard nothing but really great things about it, with many people putting it among the best otome games ever translated into English. You definitely need to check it out if you have a Vita and at least a passing interest in otome games.