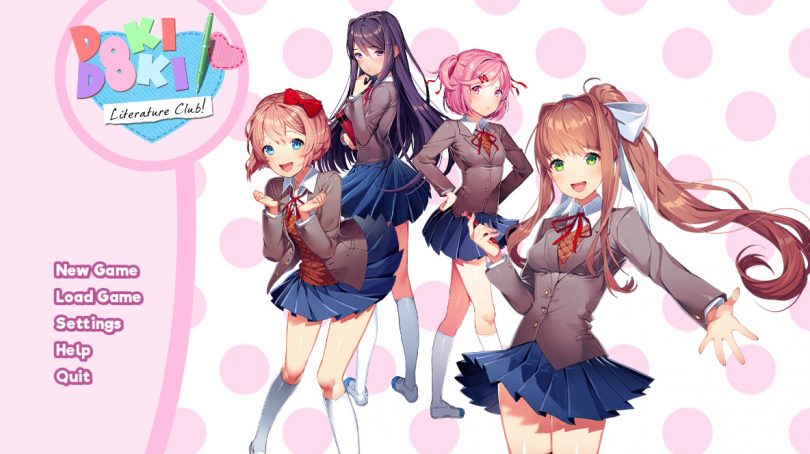 I’m sure you’re looking at that picture and the name of the title and wondering why exactly am I reviewing this game, or why in the world you should care about it. It’s easy to judge something by it’s appearances, but to truly understand what makes something tick, one needs more than a cursory glance at a game. Welcome to Doki Doki Literature Club, the 2 year labor of love by Team Salvato that is more than it initially appears to be, a work that tears apart the structure of visual novels and turns genre conventions on its head.

Before you read this review, I encourage you to go to DDLC’s site, download the game and play it, as DDLC is a rather short but sweet free to play Visual Novel. This is also the true start of DDLC in my opinion, as this game is all about expectations, and here it sets your expectations on the game itself. 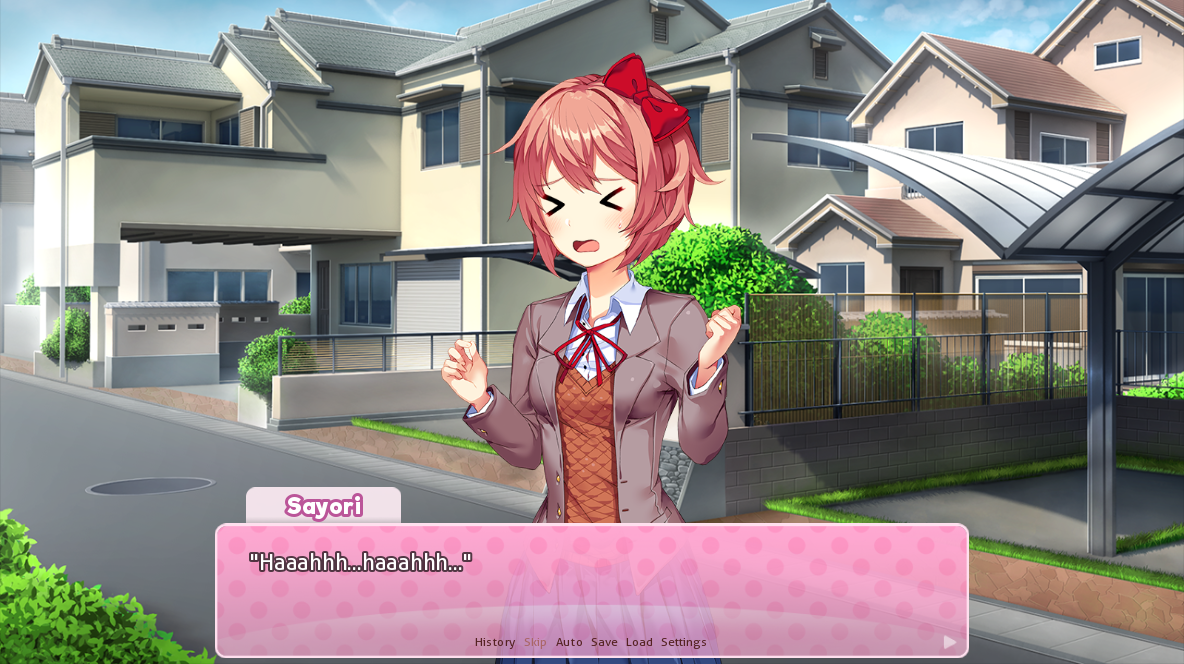 Doki Doki Literature Club starts off exactly as you expect something with the name Doki Doki Literature Club to start. Your childhood friend Sayori ropes you into joining your school’s literature club, where you soon meet the other characters in the cast: Natsuki, the simple, pink haired manga fan, Yuri, the complex but quiet book enthusiast, and Monika, the club president that’s seemingly out of your league. DDLC sets up a pretty strong impression of what to expect from the game, but unlike the appearances suggest, this Visual Novel is not your typical Moe romance VN where you screw around in the Literature club but instead a meta work that plays with the medium itself. As the creator of the game Dan Salvato said himself, Visual Novels have the ability “to tell stories in ways not possible using traditional media”, and DDLC is a prime example of that, a Visual Novel that gets you to actively think about the structure of games, and what exactly characters are.

DDLC has the willingness to challenge conventional ways of telling a story, and this is easily my favorite part about the game. What I love about Doki Doki Literature Club is that it goes beyond genre savvy fourth wall breaking, but actually delves into the structure of the game and the core that makes it work. The game structure revolves around the game itself and actually plays an important role in progressing through the story and as a matter of fact, if you keep an eye on the file system you can see changes (and you eventually have to do some file changes yourself to progress in the story). It provides an amazing experience that’s a roller coaster of emotions with fascinating development of one character in particular, and it can leave a strong impression on you as a player. It’s unique and interesting experiences like Doki Doki Literature Club that you can only find in Visual Novels which keep me coming back to this medium, and due to that, I thoroughly enjoyed my time with this game. 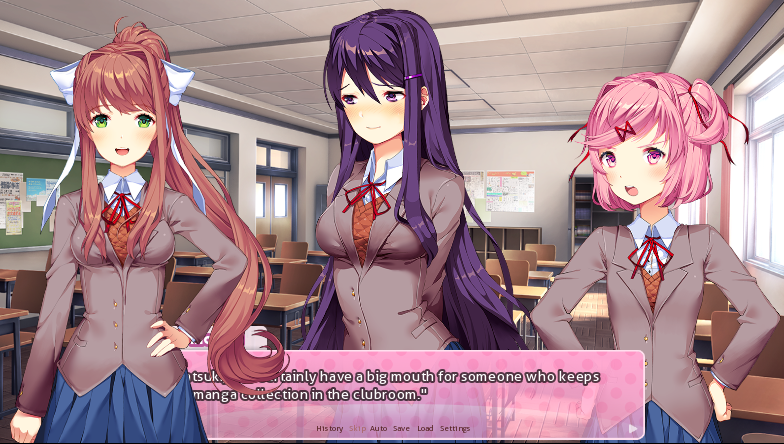 That being said, I do have issues with this game. For everything that this game did right, there’s a con that goes along with it. None of these break the game, and ultimately the pros vastly outweigh the cons especially when we are talking about the experience in the moment, but these are worth mentioning.

First of all, This whole game centers around a twist in the game, and because of that is a one trick pony. It’s only 4 hours, which is the best and worst part about the game. Being short is inviting and makes it a concise work that is without fluff, but that short length means it has no real depth to it and it may make you want more in the end. This is only really an issue when looking back, but it makes the game a lot less satisfying. It also has a huge effect on the cast of the characters: these characters are boring and never really leave the archetypes that they have been cast into sans one of the characters. Sure, it’s deliberate, and helps to push the twist, but it also makes for less enjoyable characters, and for a work that can feel shallow after you finish it.

Next, while DDLC has the willingness to change its structure from the norm, it bases everything else off the tried and true, which really hampers the experience. DDLC‘s a game that’s an OELVN, but is written in a style that tries to act like a JVN when it isn’t, a curse on the game that even extends to the title. While this doesn’t seem to bother most, I find it really annoying, the fact that the western VN industry obsesses over the setting and tropes of JVNs when they can do something original is something I can’t stand: Just because we share the medium doesn’t mean we are bounded to its tropes.  Sure, it’s a work that tries to subvert, but as it chases its twist, DDLC falls into the trap of being a romance VN, especially because DDLC is executed in a way that’s frankly forgettable, even if done well. It looks great, but it’s the typical slice of life art. The music is bubbly and cute, but it’s the forgettable moege stuff you hear in every visual novel. (That being said there are some notable tracks, like Sayo-nara) It panders along the traditional for too long, and it frankly just feels like a traditional VN in the end because of it.


Finally, even though it’s technically a regular VN with choices, it restricts your ability to choose, which can reveal the twist early, can break the suspension of disbelief given what this work is going for, and it can be frankly a bit frustrating in the end. Ultimately , I felt that the benefits to the story outweighed this negative, but I can see some people being very agitated with this decision and ultimately, even though it didn’t bother my personal experience, it irks me anyways. 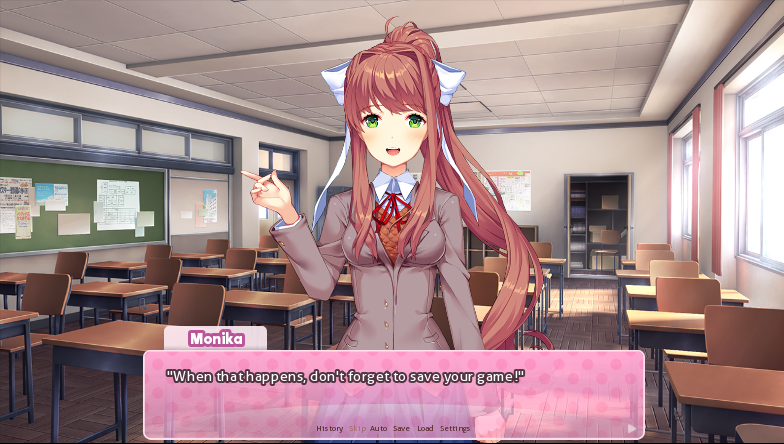 That being said, while Doki Doki Literature Club has it’s flaws, it’s important to state that the positives do outweigh the negatives: DDLC is an experience you don’t want to miss, one that is a love letter to a genre and all of the capabilities that it has. I definitely would recommend you to give it a shot, it’s an experience that shows the best that Visual Novels have to offer, especially for that low, low price of free.

+ Has a great twist