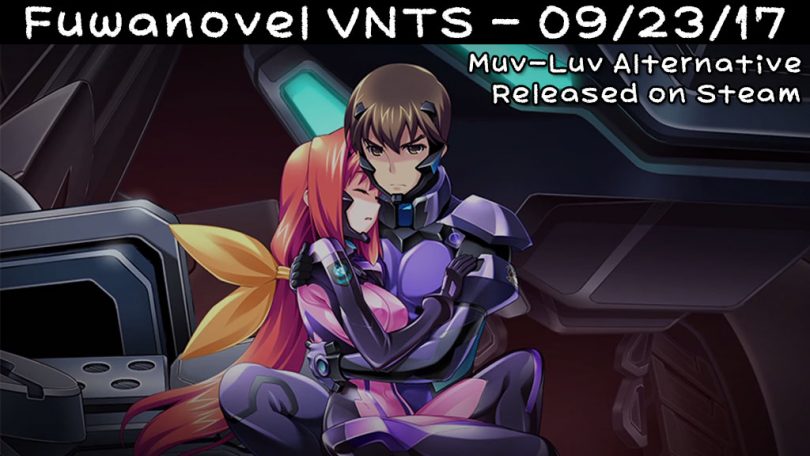 This week’s header image comes from Muv-Luv Alternative, the conclusion to the Muv-Luv Trilogy, which was released on Steam this week.

From The Team:  It’s a big week for visual novels: Muv-Luv Alternative has been officially released on Steam. Congrats to Evan and the rest of the MLA team for their hard work. This game is a wild ride. Good luck. – Tay

Decay’s MusingsHow’s it going everyone? It’s been quite a while. The combination of real-life responsibilities and site downtime has made things sketchy here and I’d like to apologize for that. I think we’ve finally regained a semblance of stability though, or so I hope.

We’ve had some pretty big releases lately and I’m just casually missing out on them all, no biggie. My backlog is now outrageous, and I’ll just have to accept that some of the VNs I want to read I’ll never get to. Like, w Happiness or Da Capo 3. This issue probably wouldn’t be as bad if there weren’t so many normal games I want to play too. 2017 is frickin’ stacked, for real.

If nothing else, I’ll try to get to Subahibi and the new Utawarerumono games. The spotlight seems to be entirely on Subahibi, which is understandable, but practically no one’s talking about Utawarerumono. 2 and 3 are definitely near the top of my list of must play games from this year. I really liked the first one and I’ve heard so many good things about these sequels.

But first, there’s Muv Luv Alternative. I played ML and tried playing MLA a few years ago, but I never actually finished it. I don’t have a good reason for this. I got like halfway to two-thirds through it, really enjoyed what I had read, and then I had to put it down for one reason or another and simply never went back to it. But I’m back and I’m almost glad I never finished it, because now I feel like it can finally be enjoyed by English-readers in the way it was intended to be.

You don’t need to know Japanese to tell how much better the new translation is; there’s so much more life and vibrancy to it. The characters’ personalities feel more distinct and fleshed out, the tense and suspenseful moments more effective, and the comedic moments so much funnier. And while I haven’t yet gotten to any especially emotional moments, even the smaller stuff is getting me more than it did before.

I wonder when reading these kinds of retranslations years after the original release if nostalgia gets in the way of fairly evaluating them. I think it’s fair to say that Muv Luv Alternative is a great VN with or without a good translation. MLA is so strong an experience that it became the top-rated VN on VNDB with a lackluster translation. English readers absolutely adored it, me included.

When people look back on an experience they enjoyed, it is almost always with rose-tinted glasses. Most people don’t want to think critically on the things they love, and this feeling is amplified when looking back on them years later. You can sort of see this effect in other areas of the entertainment industry. When someone makes a nostalgic reimagining of a classic game, if they’re doing it right then the maxim they follow is to make it how people remember, and not how it actually was. The gulf between the two is often vast.

What this means for improved retranslations is that more times than not, what a return reader experiences is more akin to what they remember reading, and not what they actually read. This can be harsh on the translators doing the retranslation. Some people may not realize they’re actually reading a better version. Most probably do, but it’s hard to tell exactly by how much. I want the MLA team to know that at the very least, I appreciate their efforts. I suggest to everyone who is reading MLA for the second time now to open up a copy of the old fan translation or to look up videos on youtube, and compare that to what’s in the Steam version of the game now. You may be surprised at just how vast the difference is. And perhaps take a moment to appreciate those who went through the blood, sweat, and tears to give you this improved experience.

The same goes for all other retranslations, big and small. To the Higurashi team, the Sharin no Kuni team, the Clannad team, the Konosora team, and even to the teams that aren’t doing full retranslations but are still working hard to bring you better experiences nonetheless, like the Umineko team at Witch Hunt, or the people behind the newer Fault translation—Thank you all. The work you do is among the most thankless in the entire localization scene, but I genuinely, deeply appreciate it.  I know how hard it can sometimes be to keep going knowing that some people will never appreciate the effort you’re making, but I appreciate what you do, as do plenty of others like me. Keep it up!

Have a good weekend, everyone.