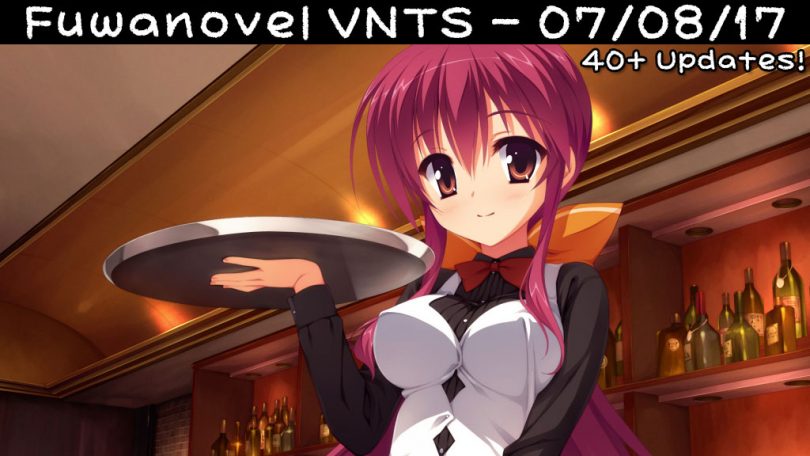 This week’s header image comes from Dracu-Riot! (VNDB) which was picked up by Sekai at AX 2017.

From The Team:  There were a ton of announcements last weekend at Anime Expo. Prepare yourselves for an especially beefy “Short Version” listing, and let me know what you thought of AX. – Tay

Decay’s MusingsSo this has been quite the AX, huh? To get the obvious out of the way: yep, Dracu-Riot was picked up by Sekai Project, and the fan project I’ve been leading for a while now has been in talks with them. If you want to know more, read this post on the Oxford Comma is Superior Subs blog. If you have any questions/comments, please direct them there or in the Fuwanovel thread for the project here.

Outside of Dracu-Riot, there were a ton of really cool VN announcements! I really didn’t expect SP to announce Senren Banka as well, for a start. It’s a little silly to see one publisher have three active translation projects for the same developer like this. But Yuzusoft’s VNs are not only absurdly popular in Japan, they’re also among the most popular VNs in the west, and I have no doubt that the official releases will be really successful. I hope Yuzusoft sees that success and continues licensing out their stuff.

I’m also pretty excited for Evenicle. It sounds like it could be a pretty fun game on its own, and while I’m not a fan of the Senran Kagura games, I do enjoy Yaegashi Nan’s general artstyle, so I’m looking forward to playing a game with his art that I actually enjoy! I’m sure there’s also a subset of players who are just interested in getting Nan’s art in an eroge, the first such eroge to be translated since Da Capo 2, where he had a pretty different style.

And Majikoi getting picked up?? Even though it was plainly obvious that Peter Payne was trying to get that license, I’m not sure anyone expected this to actually happen. Part of the problem was that Yandere Translations, the group who Fan TLed most of the VN, is hard to reach due to its leader Takajun being AWOL. The solution? I guess to just throw that stuff out and forge on regardless. I’m told that the Yandere translation is not being used and Maji Translations will be redoing those parts. Which is all well and good, since the folk at Maji Translations seem more capable of handling comedy than Yandere were.

I’m also excited to hear that Subahibi is only a month or two away. I certainly didn’t expect the release date to be so soon. I also didn’t expect it to be embroiled in so much controversy. The cut bestiality sequence (consisting of about 10 – 15 lines) is raising a lot of eyebrows, but if it’s just those few lines that are cut, then I’m okay with it. I think we can also expect to see a restoration patch in very short order, considering how brief that sequence is.

There’s not just that censorship issue, but also a twitter controversy sparked by the translation’s former editor Herkz (back from when it was a fan translation). I’m not gonna lie, I don’t like how it sounds like Frontwing handled the acquisition of that fan translation. If you’re respecting a fan translation enough to actually use it in an official release, you should respect the people who made it. But beyond that issue, I’m not sure how much I buy into the other accusations being made here. Outside of the ChiruChiru debacle, Frontwing has shown themselves to be a competent publisher of English VNs, and we haven’t really be given a compelling reason as to why they shouldn’t be trusted with Subahibi. I’m cautiously optimistic that they’ll still do right by that game, but combined with this and the censorship issue, I don’t blame anyone who wants to take the wait-and-see approach.

Anyway, there are so many other games announced at AX that seem cool! Which ones are you all looking forward to?