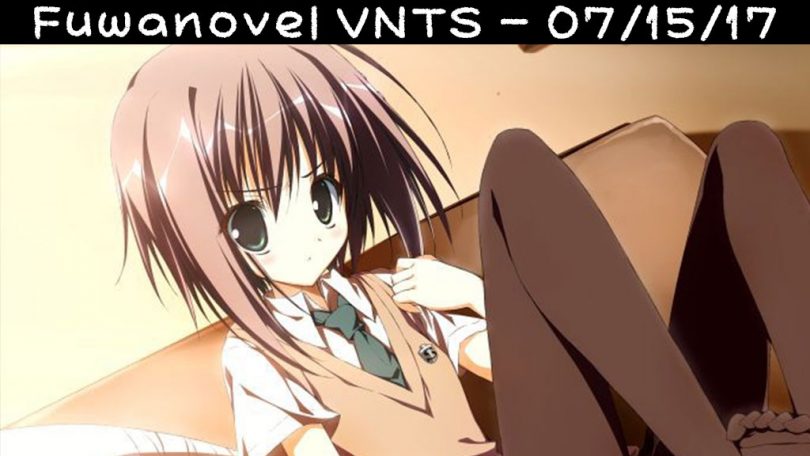 This week’s header image comes from Wonderful Everyday ~Diskontinuierliches Dasein~ (SubaHibi) (Front Wing), which had a Kickstarter preview launch. Check it out here.

From The Team:  Not a ton of announcements this week! Decay added a few SP updates which we missed last week as well. And that’s about it! I’m playing Final Fantasy VIII again (it’s the best FF game). That’s new. I also introduced a guy on a bus to visual novels yesterday. That was weird. Having so many classic VNs on Steam makes that conversation WAY easier, though. Anyway! Have a great week, everyone. – Tay

Zakabox™ 「I heard from Tay that someone mailed asking me to write something so people know I’m alive, so uhh, by some amazing coincidence I’ve now got proper internet for the first time after ten days of suffocating drought. I did… things without internet access, man. Like, I translated like 20kb of Japanese vn just because I wanted something to do. I finished two books, first a re-read of Terry Pratchett’s Monstrous Regiment (There aren’t a lot of authors I like to read more than once, but old mr. T does it for me), then Peter Robinson’s When The Music’s Over, which we picked up randomly because it was the only one in English in this boat bookstore’s lineup (and got burnt on price too – English books were in an unlisted price class all of their own, and like 30% more than the most expensive otherwise!). I’m not the biggest crime novel fan ever but I don’t hate them either, and it was quite good. I think it might be better if you’re an old cultured British person, because it referenced like a million old music tracks offhandedly – It’s not like you needed to know to understand the plot, but they seemed to be kind of an adjunct to other methods of characterization he used. It was interesting to see how much of the novel was technically not all that related to the plot, but instead spent on characterization – conversations meandering, small talk, that sort of thing – without it seeming out of place or slowing down the pace too much.

I’m writing this from a camping in Bornholm, Denmark, an island that is closer to Sweden than Denmark but still very Danish because that’s how countries work for some reason. I spent the last ten days-ish minus some time in transit on Gotland, another island, though that one actually does belong to Sweden. They call sheep “lambs” and lambs “lambkids” for some dumb reason and Visby has some slightly cool old remains I guess. Frankly it wasn’t all that special and I wonder what started the “Gotland is a p. cool place” meme. Maybe I just don’t appreciate walking in old town quarters enough, since at least the limestone cliffs at Hoburgen were pleasing to me.

Oh, right, this is a visual novel website. Uhh, nothing really stands out to me other than the Anniversary no Kuni no Alice project asking for more translators at 91% translated. That seems a bit weird. What’s going on behind the scenes? I know some otome tl projects end up with like 10 translators credited, though maybe I shouldn’t talk since I’ve been on one with like 8 (but we did it for the memes, man). Look forward to Asu Owaru Sekai, Sono Zenya tl in 2018 and Stargazer in 2020. Maybe. Sukitoki never.」

Decay’s Musings‘Sup. Pretty boring week really, IRL and in the VN scene. I suppose everyone’s just taking a breather after AX. Fine with me. I still have way too much stuff I’ve started in recent months that I’ve yet to finish, chief among them Dies irae. Eventually…

There was one release this week, however, and I don’t think anyone saw it coming. I know I never heard of Mahoutsukai no Mita Yume/Sorceror’s Dream before. Maybe it’s a good VN, maybe it’s not. I doubt we’ll ever know, because boy howdy, does the translation look bad. Like, worse-than-Libra levels of bad. The Steam description is kind of okay, but the three screenshots on the store page are nothing but word salad. It doesn’t even seem worth the $2 they’re charging for it.

And apologies for missing approximately a billion SP updates last week. It’s pretty embarrassing how many I actually managed to miss. And even this week I screwed up the tables in a few spots and had to go back and fix them. This just ain’t my month for VNTS, I guess. As always, let us know of any screw-ups or omissions and we’ll try to fix/add ’em.