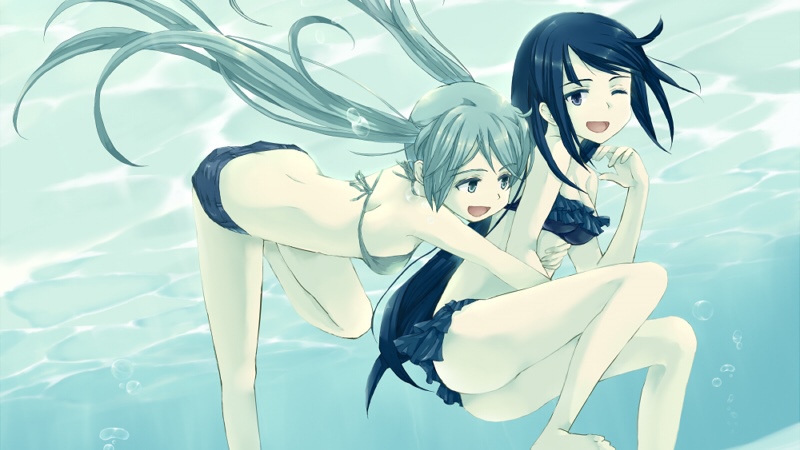 This week’s header image comes from SeaBed, which was just announced by Fruitbat Factory this week!

From The Team:  Hey there everyone! It’s me, Decay! Tay seems out of commission for the weekend so I took it upon myself to handle things this week. Sorry we’re a little late! It’s been a while since I did one of these by myself, and our setup is totally different from the last time. Here’s hoping I don’t break anything.

Decay’s MusingsWhew, it’s been a while since I did VNTS on my own. Here’s hoping I didn’t horribly screw up somehow. It’s nice to give Tay a break anyway, lord knows the man deserves it what with how busy his regular life is. It seems like the only time I can take work off his hands like this is when he’s not around to object. Hah, now you’ll have to relax and read a nice book tomorrow, take that, Tay!

The SeaBed announcement is pretty cool. I’m all for more yuri titles that aren’t your standard school-life fluffy romance. This one promises to have a deeper storyline that is a bit psychological. Apparently it was a pretty challenging read in Japanese, which is a real rarity when it comes to yuri. I’m glad to see Fruitbat Factory making good use of Conjueror, considering he’s one of the better translators in the scene.

Valve made some big waves the other day when they announced that this upcoming spring, Steam will be abandoning Greenlight in favor of “Steam Direct,” a service where you pay them a per-game fee, and your game goes on Steam, end of story. No voting process, no curation, nothing of the sort. The fee they haven’t settled on yet, but they’re thinking it will be in a range between $200 and $5,000. They also said it will be “recoupable,” but they haven’t elaborated on how. Even if it’s just a deposit, if it ends up being on the higher end, that could be a major obstacle for small time VN devs.

Opinions on the change are very mixed right now, with some people hopeful that a large fee could keep zero-effort game maker garbage off the store, and others nervous it could unnecessarily hinder indies. In practice, practically everything already got through Greenlight anyway. This looks like they’re making Steam even more open, but what they’re really doing is getting rid of the bizarre and archaic Greenlight system everyone had to wade through for no apparent reason. Meanwhile, the recoupable fee will be a large impediment that wasn’t previously there, potentially reducing the amount of games that will appear on Steam despite there being no vetting process anymore. I just hope that the VN scene won’t be impacted too heavily by this.

And thanks to everyone who gave me movie recommendations last week. I found some awesome films I wouldn’t have ever seen without you. I look forward to going through my now extensive backlog in the coming weeks. Maybe I’ll drop in some updates on what I especially liked and didn’t like, though I probably won’t do another movies-only post again. :p