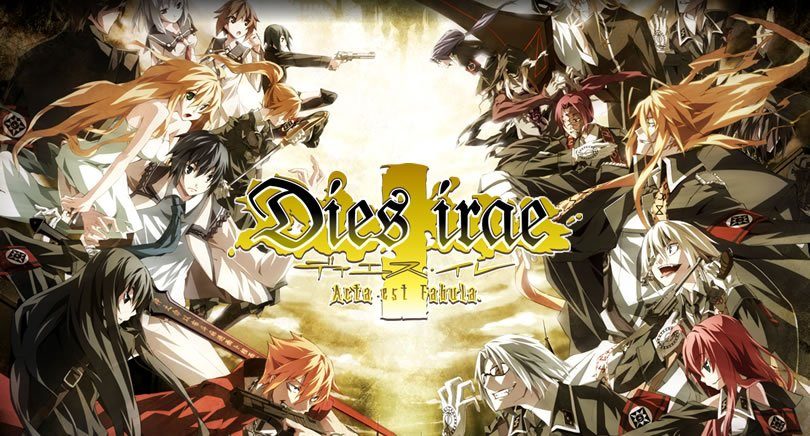 This week’s header image comes from Dies Irae which was announced for localization last week, and none of this week’s releases. Because that’s just how I roll.

Hello, my friends! Tay’s off doing lame stuff like taking medical licensing exams, so I’m here to fill in! And I’m taking the opportunity to commit atrocities in the fan translation section. Shh, nobody tell Tay about all the stuff I’m removing. We’ve got a project with a collapsed team whose prospects look dire, a project with a semi-C&D, and a few long-dormant ones that must go. More stuff might go in the near future (does anyone actually expect Commie to release a Mahoyo patch at this point?).

Man, this week’s VNTS took a really long time. I went in and inspected each and every one of the projects on the list and tried to find any possible hint of activity for the dormant ones. As a result, a few have been cut. And no, Aokana wasn’t among them. Despite what many may think or believe, we received confirmation in private that the project is still moving along in some form back when the Aokana project site became a fan site. I do understand why some people think it should be removed, and I’m personally a little unsure of what exactly is happening. Like many other projects, we’ll keep a close eye on it and let you all know if or when we find anything out. Some other projects that are on the Secret Fuwa Watchlist include Tokyo Necro which stopped delivering updates a week or two after its debut several months ago, and Commie’s Mahoyo project, for which we’ve last received word of activity some time last year. I’m also a little concerned about Brother Conflict. It’s so close! It was at 100% TL and then appeared to have stalled. I hope things are okay with it.

I’m also pretty bummed out about the Hanasaki Work Spring semi-C&D. Despite an admittedly shaky beginning and end, I was actually fairly optimistic from what I’ve seen of it. It looked like one of the better produced fan translations out there for sure, and the game itself seems pretty interesting. I wonder what this really means. Saga Planets, Hanasaki Work Spring’s developer, is owned by VisualArts, which also owns Key and we all know how active in the localization game they have been in recent years. This could be a sign that VisualArts is ready to begin offering localizations of their other brands. VisualArt’s CEO Takahiro Baba has named Saga Planets’ Hatsuyuki Sakura as his personal favorite non-Key VN, just a little tidbit for you.

Oh, and Dies Irae, huh? So yeah, last week that blindsided the VN community. We were waiting for 100% official confirmation before listing it here, and that luckily didn’t take too long. The version they’re releasing is the Amantes Amentes version, and literally every single person I know who has played it prefers it. It seems to seriously expand the VN in some important directions, and some of many people’s favorite scenes seem to be exclusive to it. It’s all-ages, so that has stirred some controversy, but I’m actually rather happy with the community’s reaction at large. They just seem to be happy to be getting Dies Irae at all, and they seem willing to sacrifice what are apparently some pretty bad h-scenes in a game that’s not about porn at all, for a far superior version. There are still those who complain despite knowing all this. I just don’t get it. I’m not sure I even want to get it. The original version these people are clamoring for is by all accounts pretty barebones, which they don’t seem to understand because none of them have actually played Dies Irae. I’ll always believe that there’s nothing sacred about the original version of a work anyway. Protecting its sanctity is meaningless.

Short-ish commentary from me again this week. I’m gonna basically send this post live right away and then hit the sack. Nighty night!*