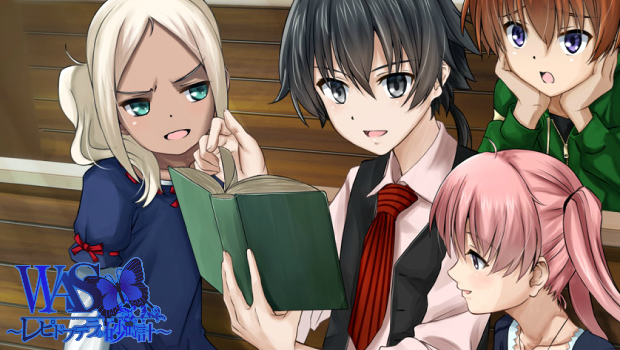 Though we have yet to see the fruits of their Kickstarter labor, Sekai Project is now preparing to launch another funding drive – this time in conjunction with SPACETIME・RESEARCH・LABORATORY (S.R.L.) to localize their visual novel WAS –The Hourglass of Lepidoptera– (WAS) as a remastered edition with added voices for the characters.

Sekai Project is currently preparing the Kickstarter proposal on Prefundia, where you can comment on the pitch while they work on it. Regarding reward tiers there’s currently five suggested price points, ranging from 12 dollars for the early bird special to 50 dollars for the all-inclusive package. The current proposed goal for translation and programming is 10,000 dollars, while proposed stretch goals are as follows:

Even if the Kickstarter campaign should fail S.R.L. still plans to finish the translation over time, though that means neither voices nor extras of any kind will be added.

WAS released in Japan this August and is the first game in a planned series of games meant to promote tourism to the Tottori Prefecture through entertainment. The game takes place in a dystopian post-war 1950’s Japan, where we follow the characters around on their travels as they meet new people, experience dramatic events and uncover mysteries in this very different version of Japan. Read more about the game and the reasons why the creators wants to promote Tottori over on the Prefundia page, where you can also watch the game’s OP.