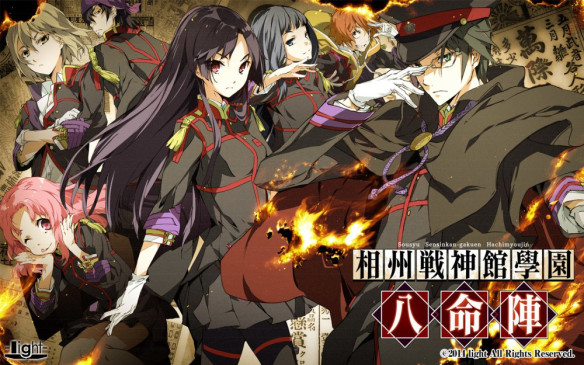 Soushuu Senshinkan Gakuen Hachimyoujin (which we will refer to as Senshinkan for brevity) is Light’s big 2014 chuuni title and also the then-latest work of Dies irae/Kajiri Kamui Kagura author Takashi Masada, so you can probably imagine the excitement surrounding it. The game breaks with Dies irae’s “Shinza” setting and comfortably takes place in its own universe, with its own rules… and I gotta say, while the game never quite reaches Dies irae’s cosmos-shattering levels of grandeur, I still had quite a bit of fun playing through it. Read on to find out why!

(If you’re wondering… Ten no Toki is the opening for the all-ages release. Unlike with Dies and KKK, the all-ages version has no additional chapters as far as I know.)

I won’t waste too much time explaining the basic premise, but essentially, the game is based around the idea presented in the story of Kantan, as well as lucid dreaming in