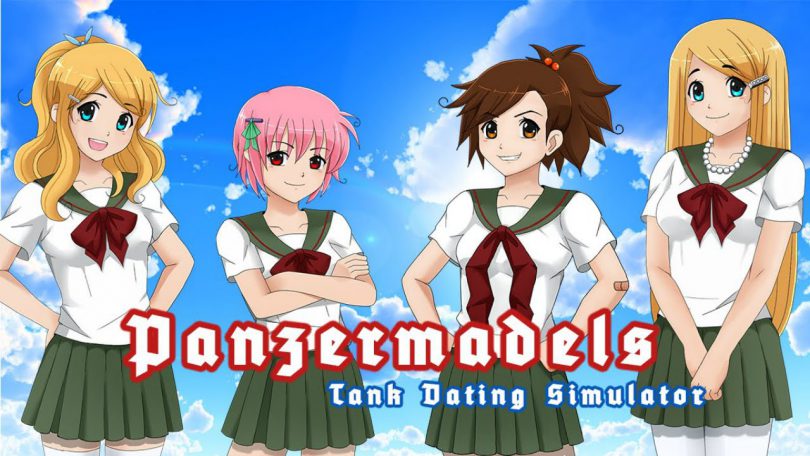 As I write this review, questions race through my mind. Where do tank-girls fire from? How does a tank-girl angling her armor prevent shell penetration? Wouldn’t that make it easier to be penetrated? Are tank-girls built in a factory, or do other tank-girls give birth to them? Panzermadels: Tank Dating Simulator is a short OELVN from DEVGRU-P in which you, playing as the main character Erwin, are sent to Tank School to learn about using and piloting tanks. Only issue is, when you arrive, the tanks are actually World War 2 battle tanks, that look like Japanese school girls. Naturally, confused, Erwin gets no help from his drill instructor, who seems to harbor some affection towards the tank-girls. 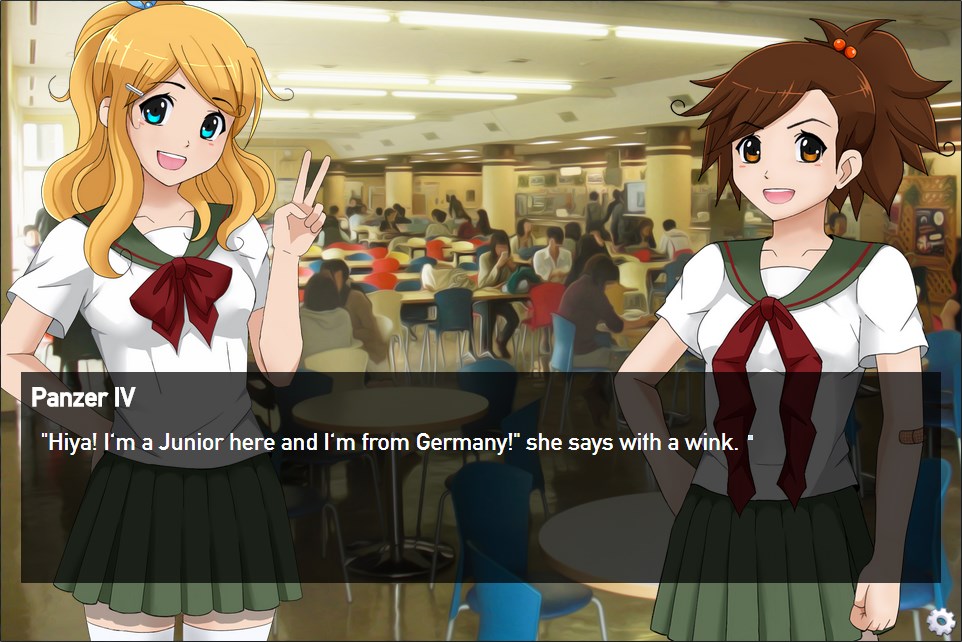 The premise is out there, even by OELVN standards. Similar to Kancolle, the tank-girls are based off real World War 2 tanks, and share resemblance to them. For example, Maus, a character based off the failed German Panzer VIII Maus tank, has large “ammo racks” and is a larger character than the rest, while T-34, based off the Soviet T-34 tank, is short when compared to the rest of the characters. The developer went so far as to even base their heights loosely off of the original tanks’ heights in official measurements. The personalities and physical capabilities also resemble the original tanks their characters are based off of. 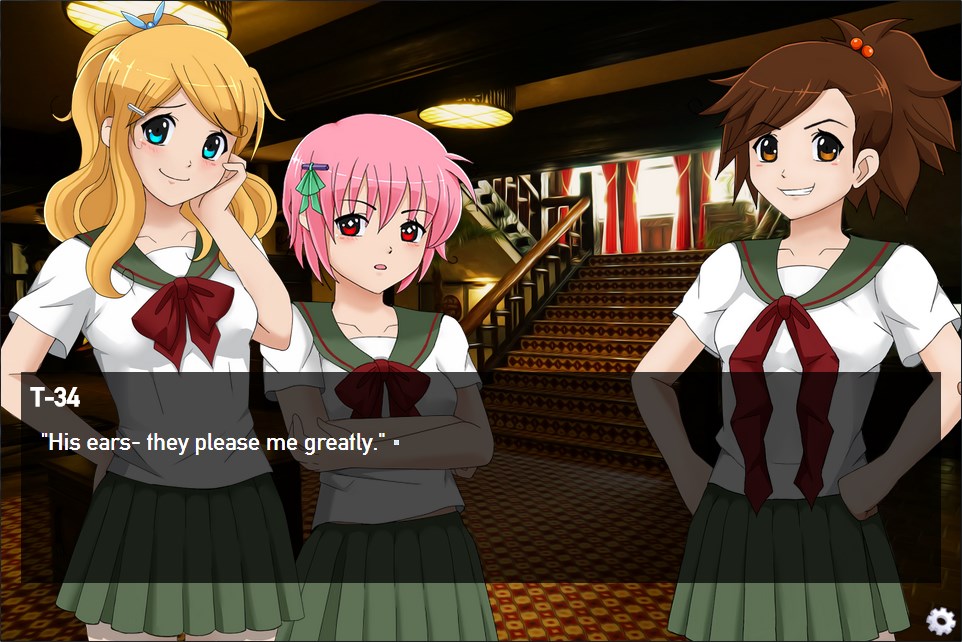 The plot of Panzermadels is straightforward enough. As I mentioned above, you play as Erwin, a recruit who is sent to tank school but ends up in “Tank School.” You meet various tanks throughout the VN, such as Panzer IV, Sherman, T-34, IS-2, and Tiger, and over the course of the VN, are given options to end up dating them. There isn’t much of an overarching plot, and a route may take about an hour or so. The dialogue in Panzermadels is what makes this VN stand out. For any fan of World War 2, or tank history, you will find yourself laughing at all of the subtle digs, jokes, and references to the time period and even to some modern-day events. We see poor Bob Semple being unable to even walk out of a room without falling over, Sherman being sneaky fast but wildly inaccurate at target practice, Panzer IV being perfect in every way, Tiger being pretty clumsy, and so on and so forth. The exchanges between the characters add to the fun as they reference their real life counterparts non-stop. Even your drill instructor gets in on the humor with his profanity-laden insults, and his sexual attraction towards tanks. 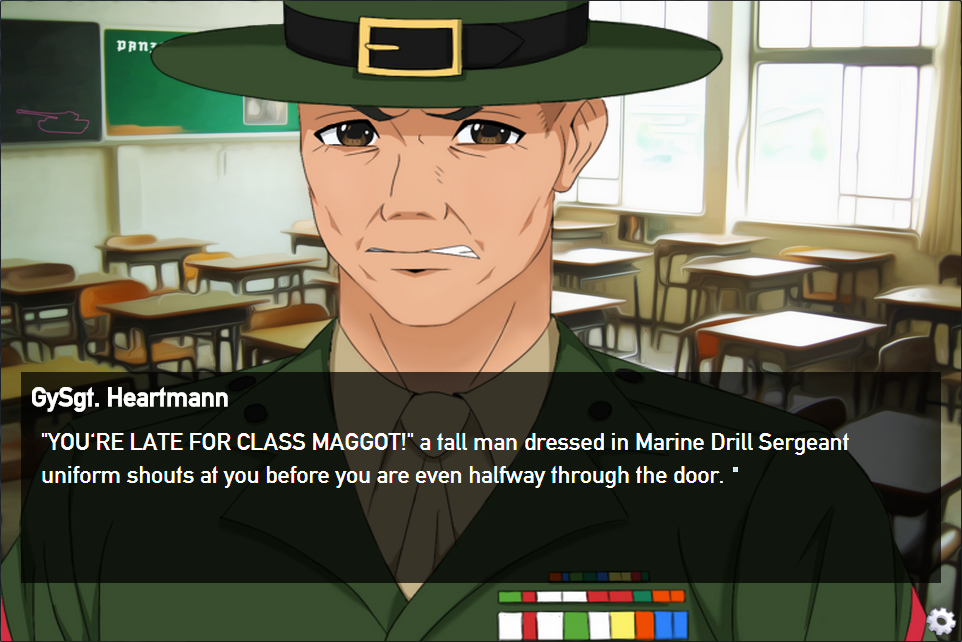 The background art is a mix of original basic art, and heavily modified pictures as is common in upstart or low-budget VNs. The actual character art ranges in quality, though most of it is passable, if somewhat forgettable. The CG work stands out, but the characters in it look wildly different than their sprites in some instances. No doubt this was caused by two different artists working on this VN. The music is essentially forgettable which isn’t a bad thing for a VN like this. A few technical issues hamper this otherwise funny, enjoyable VN. For starters, the UI is as basic and bare-bones as it gets. The text box is just plain, possibly the default text box from TyranoBuilder. There are only 5 save slots, and no options menu, so you are unable to change things like text speed, text size, volume, etc. The most unfortunate issue is the lack of a backlog to re-read previously read text over the course of a play through. Every so often a joke would land that I didn’t quite get, but I was unable to go back and attempt to re-read the set up for the joke. While it certainly did not ruin my enjoyment of the game, these technical flaws were quite annoying. Panzermadels, for a reader who enjoys history or tanks, will likely be a hilarious read with plenty of fun lines and scenarios. As a history fan, I found myself pausing to look up the tanks as they appeared just to learn even more about them. The problem that most readers will have with Panzermadels is that it is niche in a niche medium of entertainment. I worry that most readers will fail to understand the jokes, or not find them funny due to a lack of tank knowledge. So, while funny, Panzermadels will have limited appeal.

You can purchase Panzermadels: A Tank Dating Simulator here!

Review key provided by the developer.

+ Funny dialogue and scenarios for fans of history/tanks

+ Does not overstay its welcome and keeps to a good runtime

+ The endings are as ridiculous as they are hilarious

- A few technical issues, such as lack of a back log