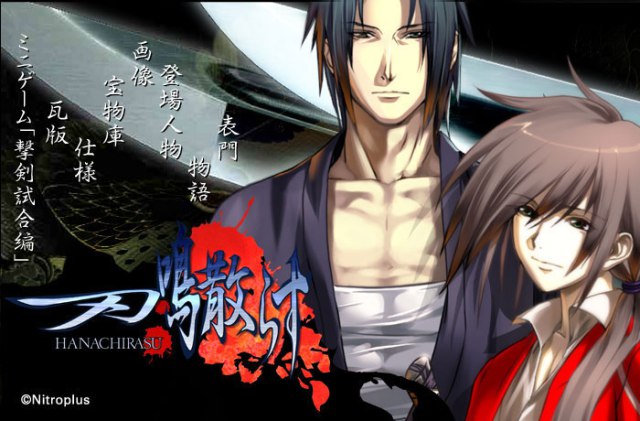 To be honest, at this point I have absolutely no clue why I continue to read visual novels by Nitroplus. Without fail every single one of their works has been disappointing overall or just plain bad to begin with…well, until now I suppose. Hanachirasu is one of the developer’s shorter works and constitutes the first of their releases that I’ve actually enjoyed reading, which is a compliment despite the fact that it failed to leave a lasting impression. For a decent Nitroplus novel about honest-to-goodness Japanese samurai with a little bit extra lurking in the shadows, Hanachirasu is a pretty safe bet.

In a timeline where nuclear weapons never decided the outcome of World War II, 21st Century Tokyo is somewhat different to our own equivalent. Having fallen under the ideals of the nationalist Ishima Kaigen, it is surrounded by a great wall and cut off from the rest of Japan. While guns have been outlawed and the way of the sword has taken prominence once more, it is perhaps inevitable that the city is ruled by the businessmen of the Takigawa Corporation. Terrorist organisations…