Home » Reviews » Gahkthun of the Golden Lightning -What a Radiant Brave- 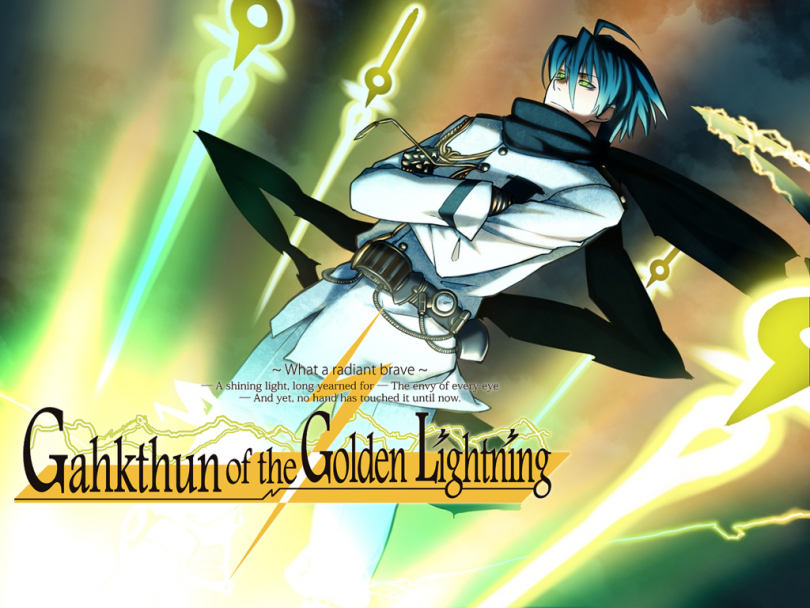 MangaGamer’s latest release, Gahkthun of the Golden Lightning, comes with high expectations. It’s the latest title in a long line of steampunk visual novels by author Sakurai Hikaru. This series has gained quite the reputation over the years. Two previous entries in the series, Sekien no Inganock and Shikkoku no Sharnoth, were already unofficially translated and were met with acclaim by the English-reading audience. This series has for the last ten years delighted fans with its unusual settings, immersive world building, and intricate storytelling. Can this latest edition live up to the hype?

Sakurai’s Steampunk world is set on a very different Earth from the one we all call home. In the 19th century, humanity discovered the lost land of Kadath, a series of continents possessing highly-advanced steam-based technology. This technology quickly spread throughout the rest of the world, leading to a rapid advancement that puts our own industrial revolution to shame. Steam engines stained the skies dark gray and turned the seas black. Familiarity with the previous visual novels in the series is optional. As typical for the Steampunk series, Gahkthun is a self-contained story in an entirely new place with a new cast of characters. The setting this time around is The Marseille Offshore Academia just off the coast of Marseille, France, set in 1908.

The Academia is a sprawling city populated entirely by the students, all 100,000 of them, and their teachers. Every facet of the city is run by the student body. And these aren’t your ordinary students, the possession of supernatural “Arts” is an everyday fact of life for many. These Arts are unique to The Academia and range from the practical to the all-powerful. Gahkthun does a brilliant job at establishing this setting and making it feel convincing. The first chapter of the VN oozes with atmosphere as it introduces you to The Academia. It immediately pulls you in and immerses you in its world in a way few VNs are capable of. You get a feel for the hustle and bustle of daily student life, and you experience the dark and shady underbelly of the city. Those of you who have read Sekien no Inganock know just how effective Sakurai is at conveying gloom, and she proves just as adept at it in Gahkthun’s first chapter. It only lasts for that first chapter, however, and the rest of the visual novel actually takes on a fairly bright tone. 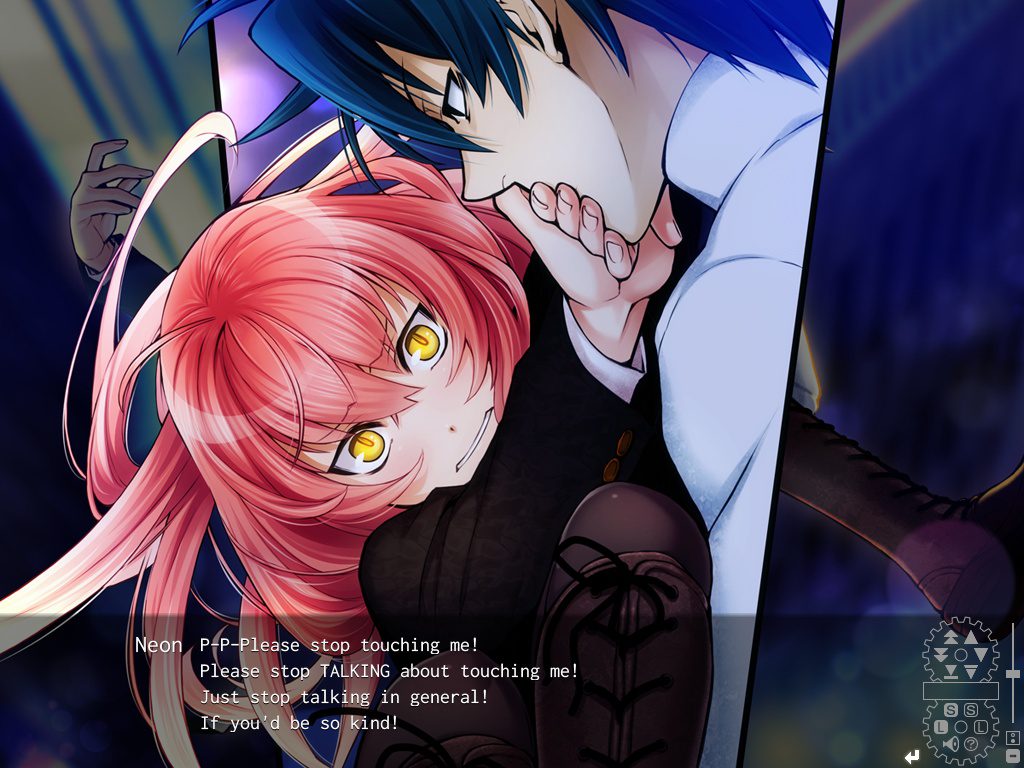 Neon Scalar Smilja and one Nikola Tesla, who “buys” Neon for 30 silver coins (maybe 100 bucks?), jointly assume the role of protagonists in the story. The cast of characters comprise a healthy mix of well-known historical and fictional people, as well as entirely new characters, and it’s fun to see characters such as Nikola Tesla and Florence Nightingale interact with this outlandish steampunk world. The core cast of characters are all well-conceived and have strong personalities that drive the story. Neon’s friends prove to be a charming group and the governing council makes for compelling antagonists. And Neon and Tesla’s relationship, the VN’s central pillar, is a very endearing one that’s a joy to watch develop. Differing from several of the previous Steampunk works, Gahkthun offers plenty of slice-of-life scenes and comical banter between these characters. Although I have to say, at several points in the story I found myself aggravated by Neon’s passiveness and general dim-wittedness.

Shortly after Tesla’s purchase of Neon, he establishes the Speculative Detective Club and announces his intention to wage war on the ruling governing council, saving each and every one of The Academia’s 100,000 students with his own two hands. What follows might be a little unexpected, instead of the open warfare and political intrigue such a premise might imply, we get a “mystery-of-the-week” style episodic story. In each chapter, another student finds themselves in a predicament that Tesla must resolve with the assistance of his almighty lightning powers. In the course of each adventure, Neon and Tesla’s relationship is developed further, and more layers are added to a complex overarching plot. For the most part this format works. Not all chapters are of equal length or importance, however, and some feel like raw filler.

An unfortunate side-effect of this episodic format is that there’s a high turnover rate on characters. New characters are constantly being introduced, and then abandoned at the drop of a hat. This in and of itself wouldn’t be so bad, if it didn’t feel that at times the main cast was being neglected. Specifically, Neon’s friends are rarely the subject of these episodic mini-stories. This is a serious issue and it’s frustrating that these characters have incomplete arcs while the VN chooses to focus on nobodies we never heard of before and will subsequently forget in an hour or two. However, the actual core characters, Neon, Tesla, and the governing council, are mostly well represented and their personal storylines are compelling. The overall story still ends up being a very strong and intriguing one, and it kept me engaged until the very end. 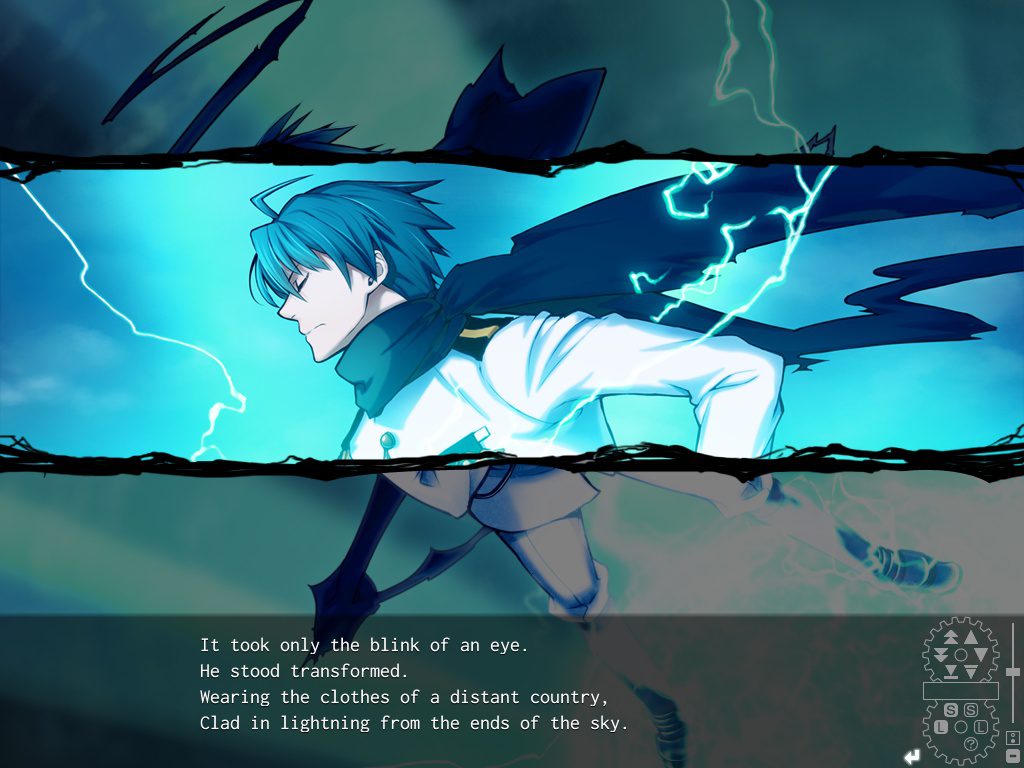 This story is aided by Sakurai Hikaru’s fantastic writing. The writing is the cornerstone of any good story, but it’s typically a neglected aspect, especially in most English translations. Thankfully, MangaGamer and the translator koestl managed to bring this strong writing excellently into English. It’s easy to read, yet is often dense with meaning. The abstract aspects of the story feel more mysterious than opaque, and the action is tightly-paced and flows well. The action in particular is something Sakurai has struggled with in the past, with some of her earlier titles having lackluster action sequences. In Gahkthun they’re detailed and lengthy, and never failed to keep me entertained. The chuuni tropes are here in full force, complete with special moves named after random thunder gods, but this just adds to the experience. If I have one complaint with the writing, it’s that the dialogue can sometimes feel plodding. The wordiness can get excessive and occasionally it feels more like the characters are offering soliloquies to each other, rather than actually conversing.

The art and music are quite good as well. The musical selection is unfortunately fairly small, but the tracks that are there are fitting and pleasant to listen to. The art itself is well drawn and the machine designs in particular are striking, although the female character designs can be a little, err, “distasteful” in their proportions to an almost unsettling degree. Where the art really shines is the variety. Almost as if to make up for the limited selection of music, there’s quite a large number of CGs to complement all of the important story scenes, and it makes the experience a much more immersive one. I find it odd however that there are so many CGs for the general story stuff, but scant few for the fast-paced action scenes. The action scenes are written well enough to stand on their own without a ton of CGs, but more attention in that department wouldn’t have been unwelcome.

The technical side of things is unfortunately clunky. The backlog functionality is limited and not particularly easy to use. The general game interface is just awkward in general. The game engine isn’t capable of any sort of “virtual fullscreen” or “borderless windowed” mode, and is limited to its small-ish 1024×768 resolution. The engine utilizes an unorthodox sprite style that also isn’t necessarily to its benefit, only allowing one “full” sprite on the screen at a time. One neat feature they did implement is an encyclopedia encompassing a plethora of details on the Steampunk world. As I said earlier in the review, previous experience with the series isn’t necessary for jumping into this one, and the encyclopedia makes it even easier for first-time readers.

And thus, Gahkthun of the Golden Lightning is a visual novel of conflicting highs and lows. Thankfully, the highs are high indeed. I love the characters, the art, the overarching storyline, and most of the episodic stories. The flip side is that several of the chapters fail to deliver, and too many of the visual novel’s best characters are left neglected, never reaching the potential they represent. While these lows prevent Gahkthun from attaining true excellence, it’s still a great experience that expertly melds together steampunk and urban fantasy. If you have any taste at all for these genres, give Gahkthun a try. If you’d be so kind.

Pick up your copy of Gahkthun of the Golden Lightning here! | VNDB

Want a second opinion? Check out our other review from Kaguya here!

+ Strong storytelling and worldbuilding combines with good use of CGs to heavily immerse you in the story.

+ The characters are full of personality and make for cozy moments during the lulls and compelling drama during the climaxes.

+ The high quality of writing and excellent translation makes for an enjoyable read.

- Several major characters are left on the wayside and have their story arcs unresolved.

- A few chapters are a bit dull, failing to move the story forward or to develop any of the more interesting core characters.

- Neon's passive and dim-witted personality left me aggravated on a few occasions.