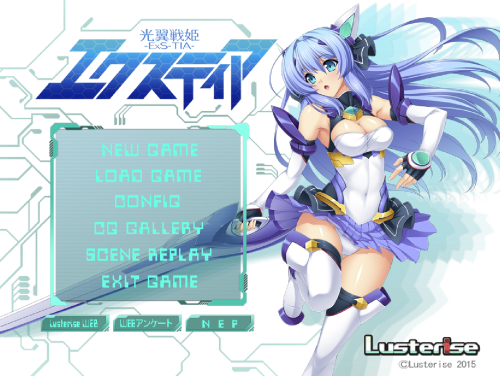 Hi everyone! It has been six months since my last post and I believe many of you probably think I have stopped writing, which unfortunately almost becomes an actuality. Within this half a year time span, I have made several attempts to draft a new post and every single try ended in a contemplation of whether or not I had what it needed to continue writing on this blog. Lack of interest towards the newly published eroge, as I have gotten enough share of entertainment from reading LNs, is the most likely the biggest perpetrator to this dilemma. (Maybe I should do a LN review next time…)

Everything changes however when Lusterine make an announcement for their newest game, Kouyoku Senki ExS-Tia II. All the sudden, my interest for eroge is rekindled and I finally have something to look forward to. This in return supplies me with enough motivation to finally remove a game from my To-Review-List.

Really hyping for this one!

Illustrated by Inoino who is one of my favorite artist, Kouyoku Senki ExS-Tia was on my playlist ever since I learned about its existence. As a matter of fact, I had completed this game a…