Deep in the city of Alabast, a district exists called The Sail where the exorbitantly rich and nobility live. It is a place of extravagance, decadence, and sexual depravity. To satisfy the third need, The Menagerie serves its clients sexual fantasies, boasting a vast collection of exotic beings for those with the money to have sex with. One such employee/slave of The Menagerie is Rao-Ji, a hermaphrodite Drachene (lizard person), and that is who the story of The Menagerie follows.

The Menagerie opens with Rao-Ji serving some of her clients, when a strange, pink, elf appears. Slightly chubby in appearance, she proceeds to intensely pleasure Rao-Ji, in a way she had not experienced before. Shortly after this happens, Sabei, Rao-Ji’s “master” gives Rao-Ji a task; to train a newly captured creature dubbed “Monkey”. These two events serve as the main catalysts for the rest of the story as they push Rao-Ji to begin exploring the world, and the people around her. 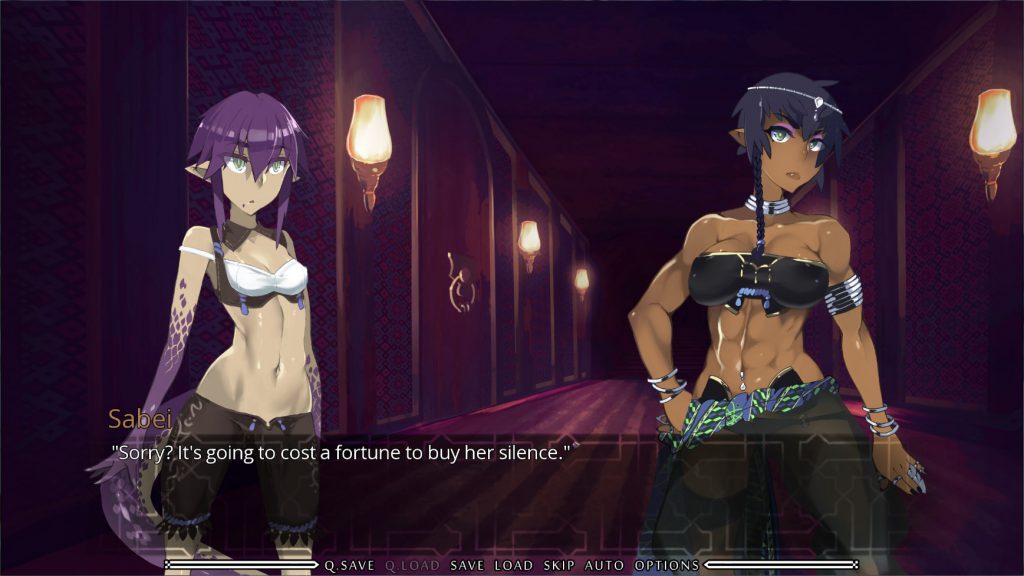 This OELVN straddles attempts to be a nukige with world building and depth, but unfortunately fails. To begin with, the world around Rao-Ji is immensely fascinating due to its use of Arabian aesthetics to create an interesting, intriguing world that ultimately never gets built on. This is a byproduct of The Menagerie being part of what seems to be a larger, in the works, series called The Radiant Period, which will include Lupiesoft’s “Dizzy Hearts” and “The Vagabond”. Because this VN is told through Rao-Ji’s perspective, we never get to see much of The Sail, or the city of Alabast, as Rao-Ji spends most of her time in The Menagerie. I can’t help but wonder if perhaps our introduction to this world should have been through another VN. The few, and brief glimpses we get of the world outside of the Menagerie are some of the best moments in this VN.

The Menagerie has three routes as far as I can tell, and only one of them was something I found enjoyable. The Key/Asuma route was easily the worst of the three, with the common theme of wanting to be free of the Menagerie being shoved in your face at every turn. Aside from one, the sex scenes in this route feel extremely forced and out of place, and the ending is absolutely atrocious. If you read the other two routes, it may make more sense, but the fact is that this route literally just ends with no warning or explanation. To make matters worse, Key (the previously mentioned Monkey girl) speaks in a dialect that makes her lines a massive headache to get through. She often uses the same words but with different meanings and her word placement is out of order in some cases. I get that Lupiesoft was trying to show how much of an outsider she is, but that doesn’t make it any easier to read through.

The Aishi route is slightly better, if only because it is easier to read, and has a better ending. My main issue with the Aishi route is that it makes little to no sense at times. Aishi is typically bound, being into BDSM, and Sabei, the head of The Menagerie, acts as her master. Rao-ji gets caught up in all of this, and grows closer to Aishi, and thus Sabei. Rao-ji also starts to grow a will of her own, choosing what she wants to do and who she wants to be with. The execution of this route is sorry mess of attempted deep, psychological insights that fall flat on their face. It was a nice attempt, but simplifying the route would have gone a long way towards making it more enjoyable. The ending here, still without much explanation, is far more satisfying than the Key/Asuma route. 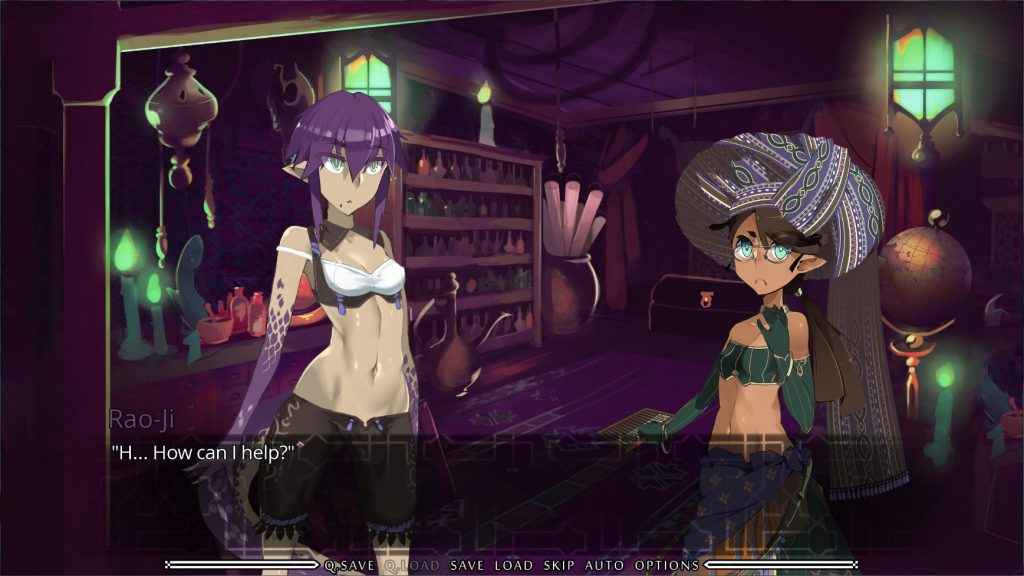 That brings us to Jouya, by far the most interesting and entertaining route of the entire VN. Jouya is the big pink elf I mentioned earlier. She is vastly wealthy, owing to her incredible work ethic when she was younger. She, out of all the characters, seems most interested in giving Rao-Ji a will of her own. Jouya, from the get go, gets Rao-Ji to think differently, and forces her out of her comfort zone by simply having fun with her. The two bond in a believable manner over time, as Rao-Ji learns more about Jouya, and Jouya works hard to allow Rao-Ji to understand the world around her. This route also gives us the best glimpses into The Sail, how it operates, and offers the best explanation as to why the Key/Asuma route ends on such a sudden note. It feels like the most time was spent in this route with planning, and writing. Its a very well-constructed route, that flows and reads well, something the other two routes lack. The ending is solid, and wraps up the VN very nicely. If forced route order were a thing in this VN, Jouya’s route would be the true end, in my eyes.

The writing is, simply put, bad. Misspellings and grammar mistakes are everywhere. Luckily, none of them are egregious enough to pull you out of what little story there is, but they are still noticeable. The actual story progression is forced. Things just happen with little to no explanation. For example, Rao-Ji has to attend a dance with Sabei. No explanation is given as to why she has to go to this dance. This isn’t a common thing because she does not know how to dance, but for some unexplained reason, she has to go. The true purpose of the scene is to show the extravagant lifestyle of the nobility, but it is a scene that just happens.

Another example of the poor writing ties into the art somewhat. Namely, what is being described in the text rarely matches what is on the screen in the images and sprites. For example, the text might say Rao-Ji took off her shirt, but instead her sprite still shows her as being fully clothed. This even happens during sex scenes, with Rao-Ji or other characters remaining clothed. The amount of CGs is very low, resulting in a lot of instances where sex scenes are simply told through text, while the same sprites remain on screen. For an 18+ VN with high amounts of sexual content, this is a huge negative. The VN is marketed for having these strange, fetishistic sex scenes, and in some of these sex scenes, the sprites don’t even get shown as naked. The naked sprites exist too, which makes this even more puzzling.

Maybe it was too difficult to code, which leads me to my next issue with the game. Anytime I have to mention the programming of a game, something has gone seriously wrong. The Menagerie required a patch shortly after release to fix some of the programming issues the VN has, and Lupiesoft has promised more. This is a pure failure of beta testing, leading me to wonder if this VN was edited or tested at all before being released. It’s really odd, considering Toko: The demon Reject was so well received and seemingly polished, that The Menagerie was allowed to be released in such a state. Backgrounds are missing, music stops working, the text breaks outside of the UI and underneath the menu, and trying to save is difficult unless you click the correct pixel on your screen.

The art and the music tie together very well. The typical Lupiesoft style is in action again with their distinct, unique style. I personally like their artstyle but it may turn some people off as it can look long and lanky at times. The background art and character clothing reminded me of the 1990’s Disney Aladdin movie, mixing a distinctive Arabian/Indian style with the interesting character designs. The music with its Middle Eastern flavor added to that to give this a splendid, desert city feel, and make the culture and world feel extremely foreign. It made me want to explore the world more, but as I said before, we aren’t given many chances at all to see the world outside of The Menagerie due to the way the story is told and written from Rao-Ji’s perspective. 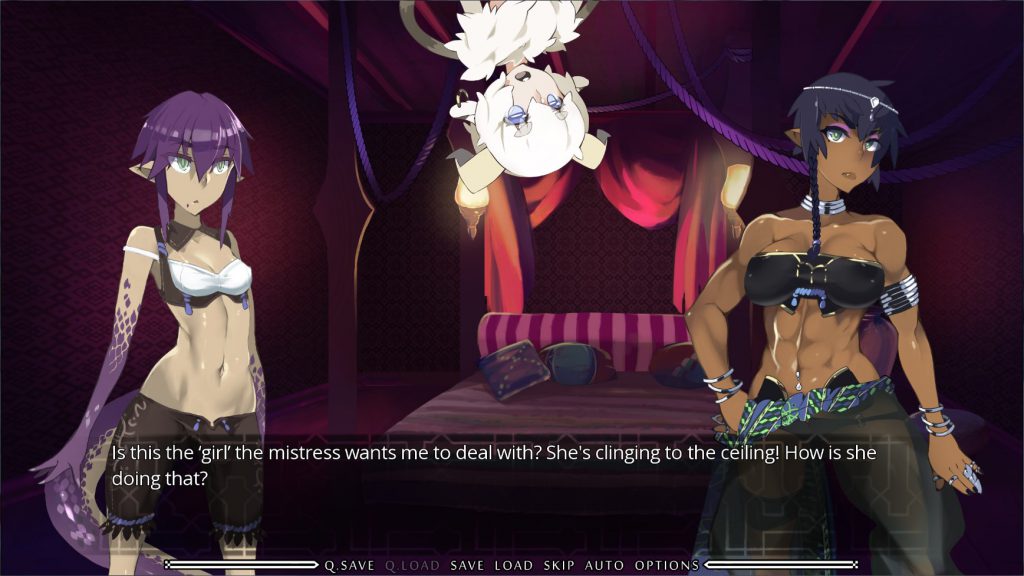 The Menagerie is a poorly told story, poorly built, with poorly done sex scenes, but solid art and music. The entire package feels rushed, which is odd seeing how it was delayed at least once, and announced well over a year ago. The VN needs another editing pass, and needs a lot more patching to fix the numerous bugs within the game. The perspective from which the story is told unfortunately leaves the reader wanting to know more about the outside world, and the 3 main endings are at best, solid, but mostly just bad. The Menagerie is a very bad VN that needs a lot of work to get it up to even an average read.

- Spelling and grammatical errors are common