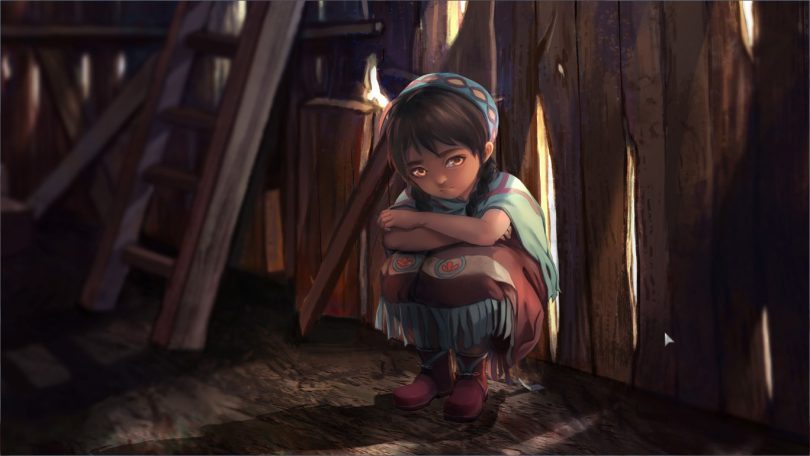 On a show of hands, how many people know about the War of 1812, between the United States and the United Kingdom? Judging by the lack of comments saying, “Oh I know that war!!!” I’d say not many people are really aware of it. And if the comments are actually filled with people who know about it, then bravo my fellow history enthusiasts. Needless to say, seeing a VN set during The War of 1812 instantly piqued my interest.

That is the setting WarGirl Games decided to go with for their debut VN release, Over The Hills and Far Away. Taking place in the Northwest Frontier (as in Ohio, Michigan, Great Lakes region) during the war, this kinetic VN tells of a British army deserter, William Aubrey who has lost faith in the war, and in fighting in general. He was once part of the 41st Regiment of Foot, but after a disastrous battle for the British, in which their Native American allies were killed in droves as the English troops broke ranks and ran, Aubrey decides to desert, and attempt to start a new life. He now has to journey across Native American lands, avoiding hostile natives, Redcoats, and American troops. What he doesn’t know though, is that something far worse is chasing him. 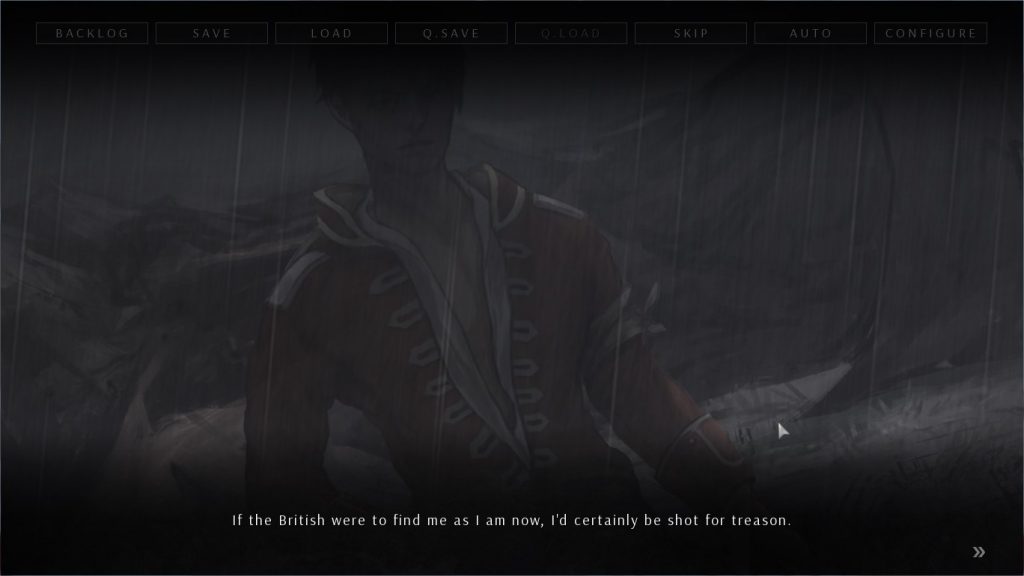 During a long rainstorm, Aubrey attempts to scavenge an old battlefield littered with bodies. Cold, hungry, and wounded from a minor gunshot wound, he comes across an old, dilapidated barn. Acting with caution, Aubrey raises his weapon, and opens the door, only to find a young, silent Native American girl already inside the barn. Over The Hills and Far Away is not the most story-packed VN I’ve read, instead focusing on smaller details regarding the characters. We eventually learn that the Native American girl’s name is Mai (Aubrey shortens it to Mai. Her name is much longer in her native language).

Mai is smarter than her age would show, something that catches Aubrey off guard a few times. At the same time, she is child-like and energetic, but shows a deep love for her family, whom she is trying to find. The relationship between the two, Aubrey and Mai, progresses as one might expect. The two grow closer, with minor setbacks here and there. however Aubrey, whose perspective the game is played from, is conflicted by this growing relationship. On the one hand, he wants to find somewhere to start his life over, free from being chased, and on the other hand, he wants to help Mai. What I appreciate most about the relationship growth is that it is portrayed in a realistic manner. The two characters, while bonding in a short amount of time, do so over a common interest: finding permanent shelter. 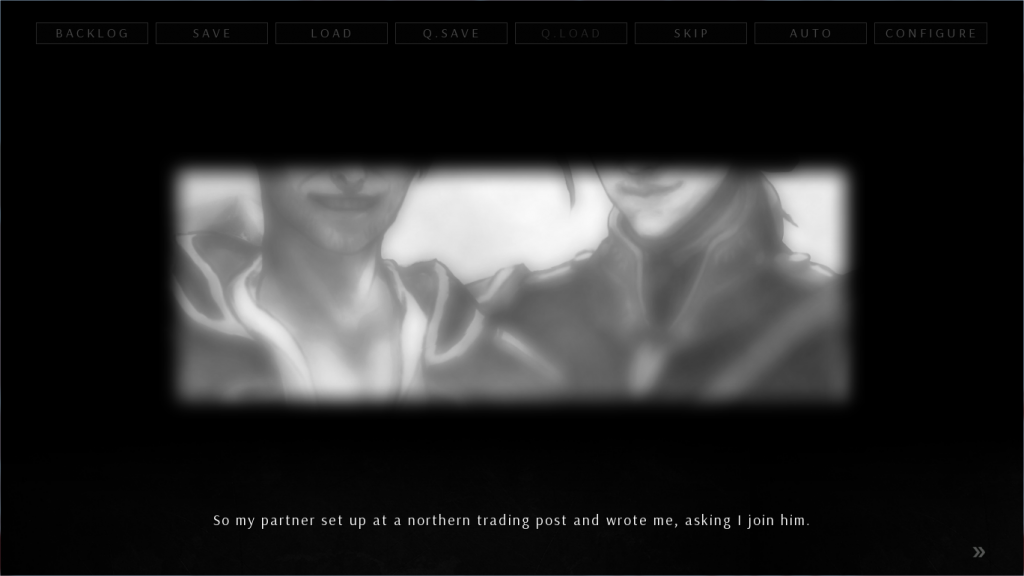 Due to the short period of time the VN spans (only a few days), we do not see much in the way of character growth or change, but this is offset by the development the characters get through their backstories. Aubrey’s past is explored through well-timed flashbacks that hint at the direction of the VN, but do not act as spoilers. Mai’s story is told through the reactions she gives Aubrey, and even the way she speaks. We get an idea of how close her family and her village are just through what she says, without her ever explicitly stating how close they all are. One could argue that, for the most part, the story is the character development and learning more about them.

The VN does have an antagonist, and the story switches to focus to that in the latter half, but prior to that there really is no story. It is simply Aubrey and Mai in the barn together, getting a feel for each other. While entertaining at first, it did start to get boring being in that barn for so long. This is where the flashbacks come in handy, adding some variety to the setting and keeping things from getting too stale. Once the story progresses though, it moves at a breakneck pace to a satisfying and somewhat unpredictable ending. Without getting into spoilers, the ending does leave an impression and, for me at least, is very memorable. 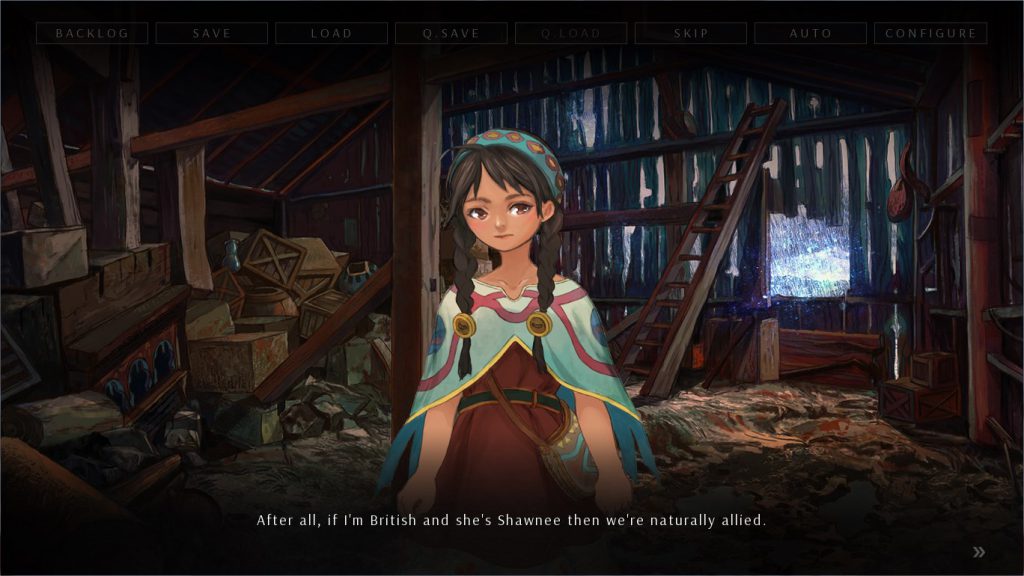 The production value of Over The Hills And Far Away is surprisingly high. Some scenes contain minor animations, nothing major but still a very nice touch. For example, when it is raining, the rain is animated on-screen, or a dream sequence might have minor animations, giving it a different feel from the rest of the art. It is simply a nice, unexpected touch for an OELVN. The music, while not period pieces as far as I can tell (I’m not a music history major), is fitting for the scenes and adds to the immersion, acting as a splendid mood setter. Anytime I find myself impressed by the music, and not simply ignoring it, that is a very good sign. Most of the music is made up of soft, stringed instrument pieces that do not overpower the scene, or ingrain themselves into your eardrums, but instead work with the art and story to create a an immersive scene in which no one item acts as the sole driving force of the scene.

Speaking of art, this is another area where Over The Hills And Far Away shines. While the character designs seem a bit off at times, the color usage and background art more than make up for it. The barn in the first half of the VN is dark and dreary, but Mai’s outfit stands out with a bright blue color, and when the setting changes, the color usage explodes, showing off the untamed beauty of the Northwest Frontier.

Over The Hills And Far Away is a short VN, clocking in at about 90 minutes or so. Coupled with an $8.99 price tag and low story content, it might be hard to justify, but if you have an interest in American history, or are just looking for a VN with a unique setting and unique characters, then this is well worth the read. It strays from your typical VN setting, with good production values, solid character development, and a good use of color in the various CGs and character sprites.

- No reason to re-read