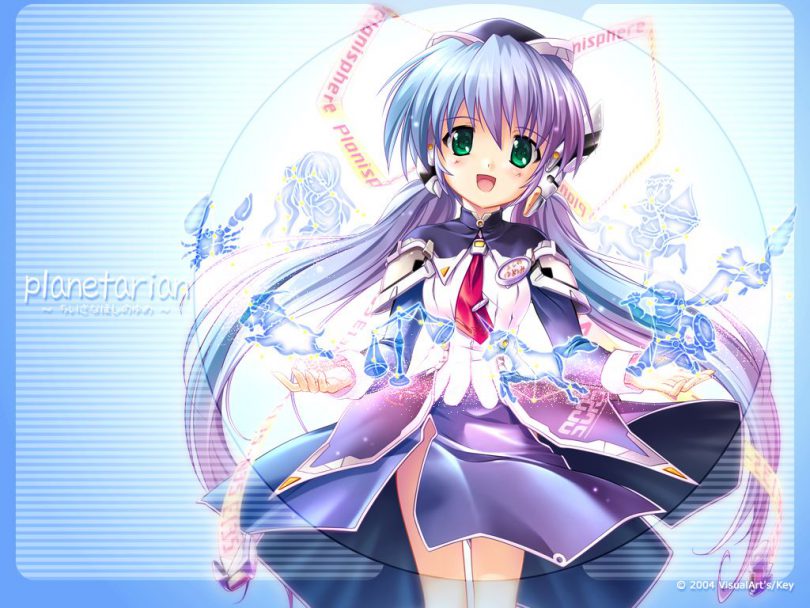 Storytelling is the most powerful way to put ideas into the world today.

Warning:  While many steps have been taken to limit the amount of spoilers in this review, please be aware that this review will contain spoilers.

One of the neatest things in the state I live in – Kansas – is the Cosmosphere.  It’s a museum/educational facility revolving around space, the cosmos, and the tools used to get there.  When I was in first or second grade (around seven years old), we went there on a field trip, and after sitting in a Planetarium and staring at the projections on the domed ceiling, I was mesmerized by all things astronomy.  Sadly, that phase ended a few years later, but I still have my telescope very close by, and on clear nights, I’ll take it out and just explore the cosmos.  After reading Palas’ review on Steam about this title, I realized that I needed to read this VN, and I’m so glad that I did.

Originally released in 2004 (and again in 2006, and again again in 2010) by VN giant Key and translated into nine different languages, planetarian ~the reverie of a little planet~ is a sci-fi kinetic novel that tells the story of a human being who happens upon something that will change life as he knows it.  While the game is quite short (approximately five hours if you leave the game on Autoplay), it is a story full of twists and turns that culminates into one of the strongest endings I’ve seen in a very long time.

Get your handkerchiefs out, because this nakige will make you cry.

This review is for the Steam version, released by Sekai Project in 2014 based on the 2010 release. 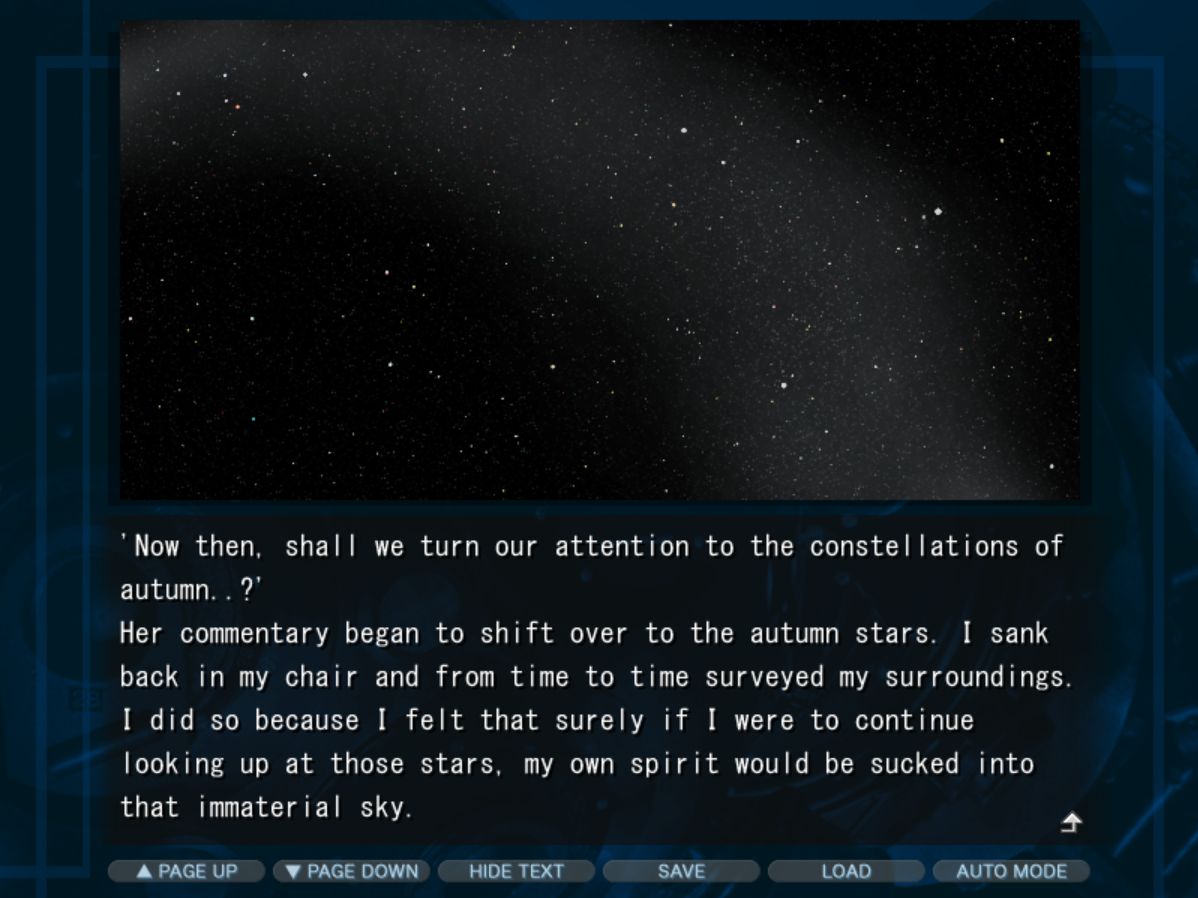 Frankly, that wouldn’t be a bad thing at all.

planetarian puts you in the shoes of “Mr. Customer,” an otherwise unnamed protagonist thirty years after a nuclear holocaust that cut the world’s population into a fraction of what it was.  War is rampant among the remaining survivors, civilization has devolved into nothing more than survival of the fittest, and a destructive Rain continuously falls, poisoning the ground, buildings, and everything it touches.  You are a “Junker” – essentially, a scavenger that braves these hellish conditions and tries to find supplies from uninhabited “sarcophagus cities” that are patrolled by bloodthirsty unmanned robots.  Equipped with your grenade launcher, you quietly infiltrate the heart of the city, and come across a department store with a huge dome on top.

Within that dome is probably the last thing you expected, a Companion Robot resembling a young lady who proclaims that you are the 2,500,000th customer to visit the Planetarium – whatever that is.  Thing is, this robot, who introduces herself as Hoshino Yumemi, and begins to chatter on and on, much to your annoyance, presents you with a bouquet made of junk and makes a request.  She asks you to watch a show at the Planetarium – one that was reserved for the 2,500,000th customer (you’re actually only the 2,497,290th customer, but she’s making an exception for you).  You reluctantly agree, only to discover that the projection is broken nearly beyond repair.

For the next few days, at the request of Yumemi, you work to fix the massive projector (referred to as “Miss Jena”), and during this time, you learn to deal with and actually enjoy the odd robot’s excessive chattering.  You think that maybe this wasn’t so bad, but since you don’t have any rations, you know you’ll have to leave eventually.  After completing the repairs and seeing the show you were promised, Yumemi insists on escorting you back to your vehicle, completely unaware of the changes in the outside world.  The rest of the story is the aftermath of that decision. 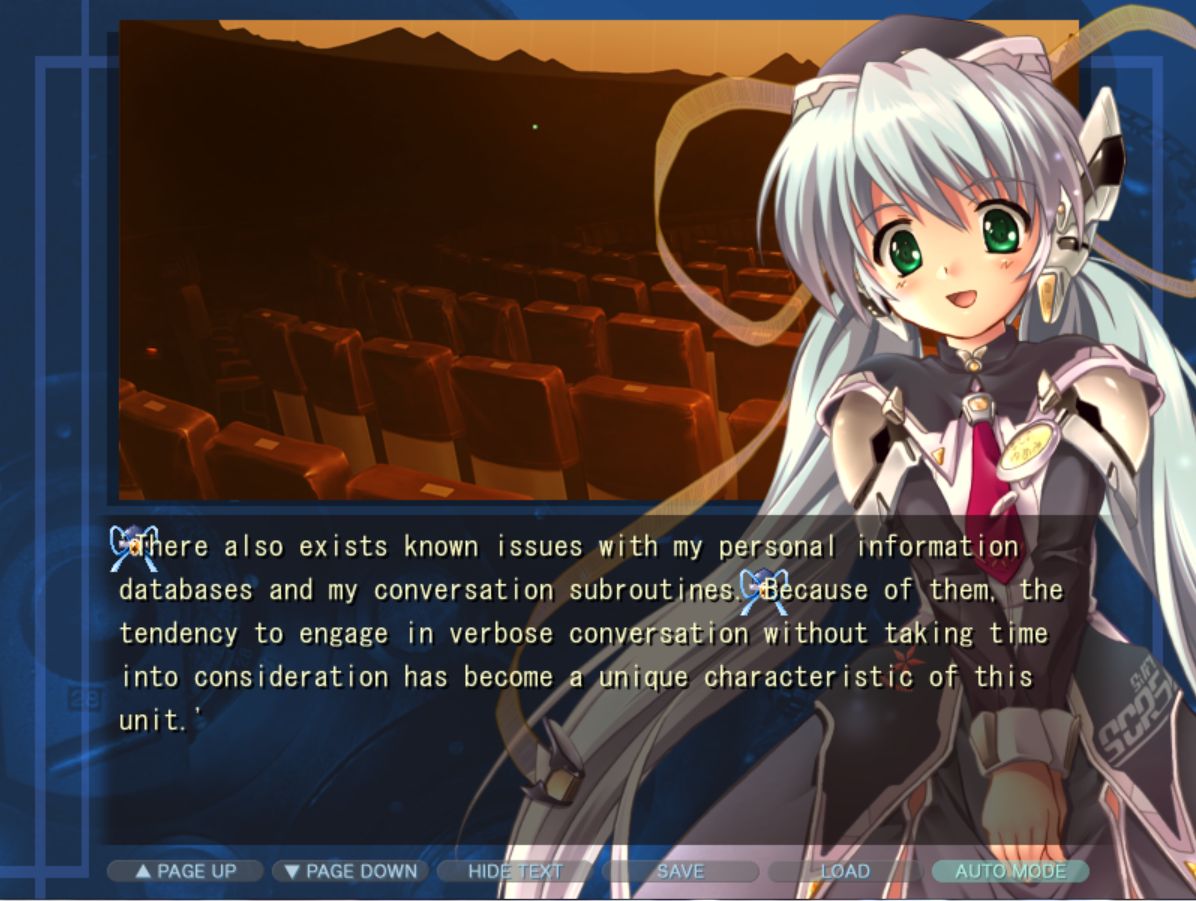 For such a short game, the pacing is very well-handled.  The game starts pretty slow, but once it grabs you, the pace will never slow down, and it’s that feeling of “Please don’t let something happen to them” that makes you want to keep reading.  I ended up marathoning the game in a single sitting, because I was unable to find a decent place to stop.  I strongly suggest that you set aside an evening to read this in one shot.  The Steam version is also fully voiced, which simply added to the tension of the story.  Additionally, the three main characters of planetarian are also very fleshed out.  Readers familiar with the VN will very likely ask me “Aren’t there only two characters?” when in reality, the Rain itself acts as a third character.  It symbolizes just how miserable the world has become, and it’s unceasing nature continuously reminds you of that fact.

The artwork is standard Key, so if you liked their other works, this one will not disappoint.  Oddly, the game has a static border throughout the entire game, which prevents the backgrounds from taking up the entire screen, but you get used to the presentation pretty quickly.  The soundtrack is also solid, though some of the sound effects were nearly headache-inducing, and required me to mute my sound throughout one specific scene late in the story.

Aside from that complaint, the only issue I had with this VN was that Sekai Project abused their thesaurus – the reading level for this VN is ridiculously high for an All-Ages VN.  It almost seemed like every other window had some word I rarely heard in conversation simply plastered there, and non-native speakers may have a difficult time fully understanding what is going on.  Aside from that and the very rare typo, it’s a fantastic story, but not very “non-native speaker” friendly. 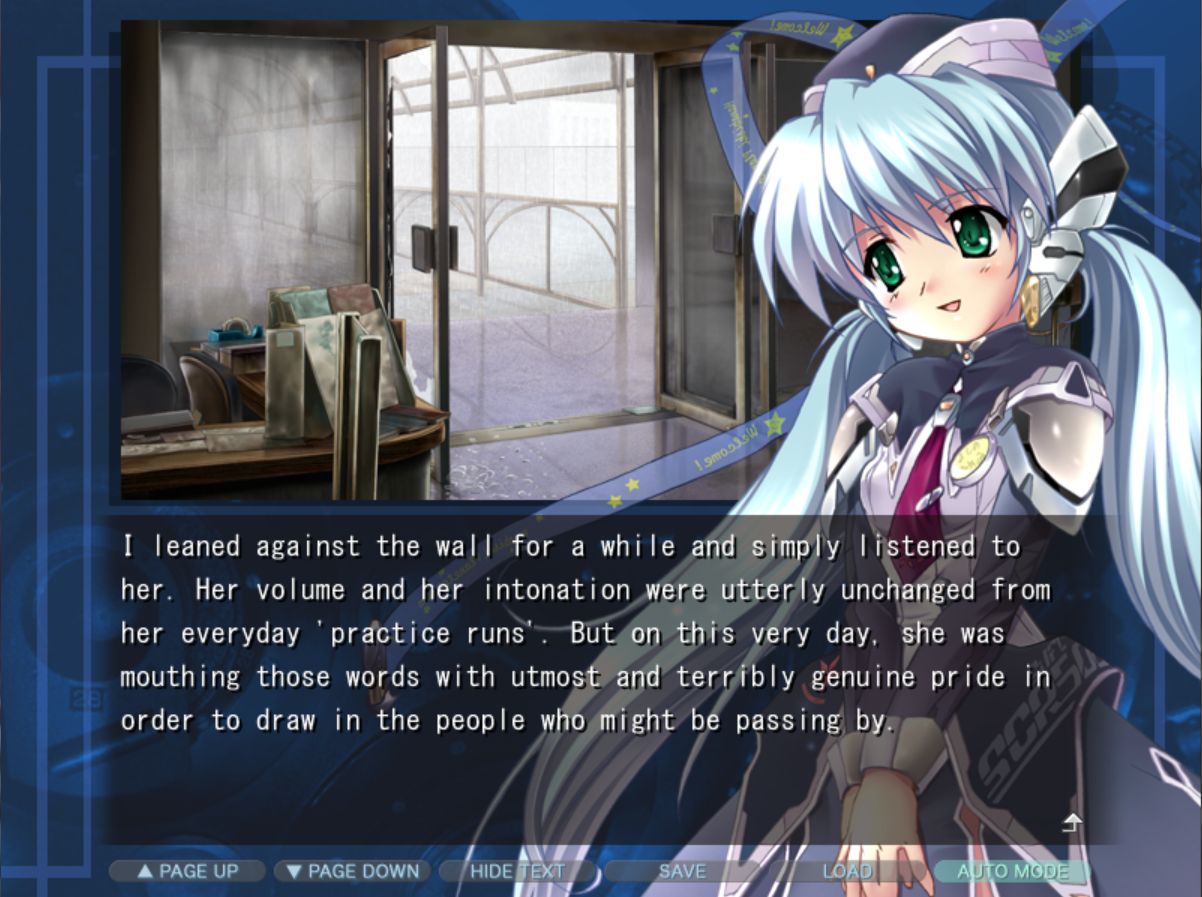 Honestly, you need to read planetarian.  This game sets the standard for what all Post-Apocalyptic games should be, and this rollercoaster of feels won’t let you get off until the credits have rolled.  Get this game.  Please, get this game.  You won’t regret it.

Why don’t you come to the planetarium?
The beautiful twinkling of eternity that will never fade, no matter what.
All the stars in the sky are waiting for you.

(Shoutouts to Palas for the original review that made me want to read this VN!)

- High reading level may be difficult for non-native English speakers

- Some sound effects are very grating