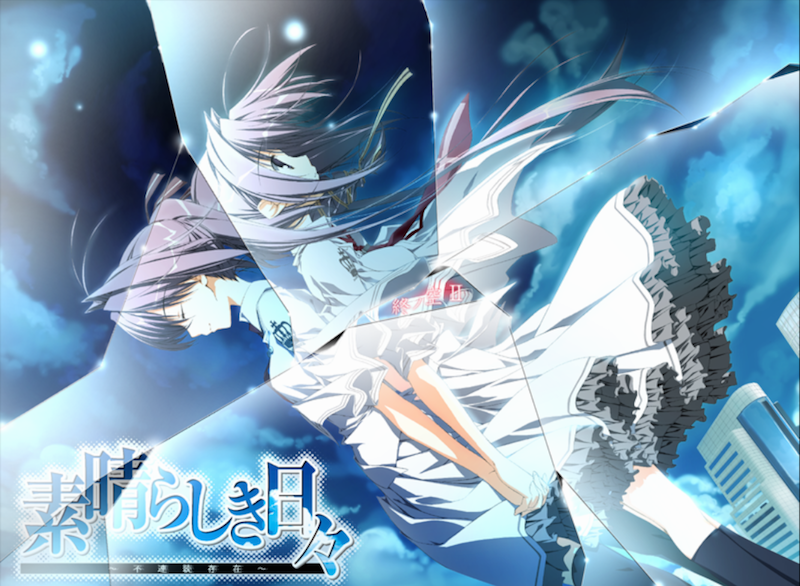 With both its English translation and its spiritual sequel (Sakura no Uta) around the corner, now seemed like a good time to review Subarashiki Hibi. After having taken a few weeks to gather my thoughts, I’ll try to give a coherent report of what I thought of this game – incidentally the first full-length eroge I finished in japanese, yay.

SubaHibi is not easy to summarize. You can’t state what the game is about in a simple way, and you can’t give a synopsis of the whole story, because SubaHibi is divided into seven parts. Setting aside Down the Rabbit Hole I and Jabberwocky II as a prologue and a conclusion, the story is told throughout the five main parts from five different points of view, with each new chapter unveiling new parts of it and exploring themes of its own. You can simply read vndb’s synopsis to have an idea of how the game starts. Telling the same story through different points of view is nothing new, but it’s also not easy to do correctly. Sca-ji pulls it off in a remarkably skillful way here. Each new chapter follows the preceding one very naturally, while shining a completely different light on the events. The redundancy is minimal, and each part of the story stands on its own while taking its place in the big picture. Rather than setting puzzle pieces and assembling them in the end in a series of twists a la Uchikoshi or other “twist story” writers, everything is progressively introduced in such a way that your perception of the story can change drastically throughout the chapters without you even noticing it at first. “Natural” is really the word that comes into mind when attempting to describe how the game flows. For example, whereas Invention and Insects feature the hallmarks of denpa, with their depiction of a descent into madness, the first chapter Rabbit Hole II is a more traditional kind of horror, which I liked a lot. It’s a horror based on mystery, on the fact that many events are still very mysterious and that a creepy atmosphere can be created that way. How could that chapter have been placed anywhere else in the game? Since the nature of the unfolding events is being progressively revealed, the first chapter was the only opportunity to create this kind of mysterious atmosphere, and Sca-ji immediately ran with it. 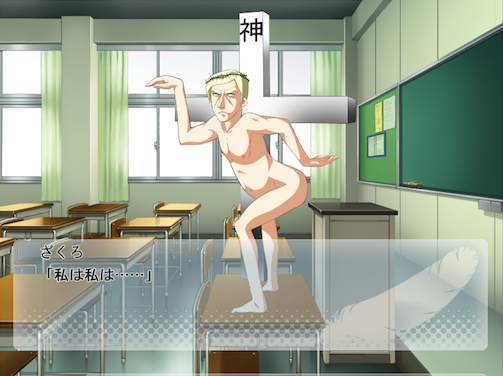 This is actually pretty low on the weirdness scale

Despite the remarkable coherence of the plot, SubaHibi can be divided into two fairly distinct parts. To understand where that distinction comes from, a little bit of context is needed. One of Sca-ji’s most renowned works as an eroge writer is his contribution to the denpa genre through Tsui no Sora, one of the “three major denpa games”. But even though that game gained quite a cult following over the years, Sca-ji apparently wasn’t satisfied with it because he then proceeded to change and expand that work. Over the years that became SubaHibi, which is now considered his magnum opus. While Down the Rabbit Hole II, Invention and Insects are basically a remake of Tsui no Sora, including large amounts of directly pasted text, the rest of the game is actually quite different. This difference is felt mainly in the genre and themes of those two distinct parts. Tsui no Sora is a denpa game, it aims to be horrific, it takes you on a ride from mad scenes to shocking scenes. On the other hand, as soon as we enter Jabberwocky I, the story becomes mainly an introspective character drama. In fact, by the end of Jabberwocky I your perception of the story will have changed quite a lot, more than at any other moments (except maybe the Tsui no Sora II end, haha), because you’ll feel the point of the game will have changed. Personally I wouldn’t hold that against the game, but I know that some people don’t like works that scatter themselves a bit too much thematically. So what’s there to enjoy in SubaHibi? Well, I mentioned that one part of the game was horror and the other was a character drama (take that with a grain of salt, because I don’t like categorizing too much and I sometimes fail pretty hard at saying what I want to say).

Let’s start with that aspect. I thoroughly enjoyed the creepy, mysterious atmosphere of the end of Rabbit Hole I (the gondola ride scene was one of the most defining scenes of the game for me) and all of Rabbit Hole II. I know it’s not usually the parts people like the most, probably because they’re clearly not the most dense nor crazy ones, but I’m a sucker for this kind of ambiance. Worthy of note is how apt the visuals are at supporting this aspect. It should also come to no surprise that a writer of denpa games like Sca-ji can, when he wants to, elevate his prose from quirky but not particularly brilliant to one that is sort of poetic with incredibly effective descriptions of settings, lights and mood that will give you chills. Invention is a pure descent into madness. ‘Enjoyment’ is not the word I would use here because aside from, for example, the incredible scene you get in the alternate route, I did not ‘enjoy’ myself. I was rather fascinated, thrilled, maybe. Starting from scenes of ijime taken much further than what you’d usually expect (but that’s only because you’ve not read Insects yet at this point), Sca-ji then takes you from crazy scene to crazy scene, destroying any notion of morals or common sense along the way, and showcasing the kind of extreme weirdness that you can only afford to do in a medium like eroge. Invention is dauntingly long and features repeated and nonsensical text, and this actually participates in throwing you off and making you uneasy. It’s most certainly a unique experience. The kind that I did not enjoy but find mandatory to experience once. In comparison, Insects, which is fairly similar to Invention but from a different viewpoint, is less interesting. That’s because it was actually hard for me to go through some of the scenes without just skipping, but at the same time it’s not as madly fascinating. An interesting thing in that part though was how it references Cyrano de Bergerac – how the alternate route is Cyrano going right and the true route is a twisted take on it. Jabberwocky and the short chapters that go with it left me with mixed feelings. The character drama didn’t really resonate with me, which is probably my biggest personal gripe with the game: a lot of people seem to have found it emotionally great, but I didn’t. Considering it’s what most of the game is about after Jabberwocky I starts, it’s a bit of a downer.

On the other hand, I can’t deny that this part is impregnated with a special atmosphere, and that some of the inner struggles of the characters gave way to very powerful scenes. It’s also where the themes of the game are on display the most, which makes it the most interesting part. 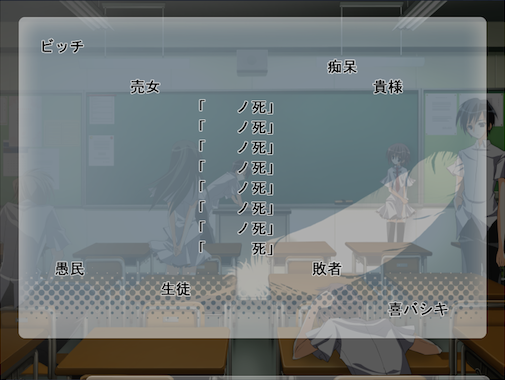 An example of deep, meaningful prose

Placed sporadically throughout the story are numerous literary references (as well as a bunch of otaku culture ones). Whether they are only casually dropped or discussed a bit, whether they have practically no link with the current situation of the plot or reflect it, those provide food for thought moments between the parts that appeal more to emotions. Even though any self-respectable nerd will google any reference upon reading it, the text remains clear enough at all times that you don’t need to. Knowing the reference beforehand may also enrich your experience (as with the aforementioned Cyrano de Bergerac), but everything is woven seamlessly into the fabric of the game. This not only shows Sca-ji’s wide range of knowledge on the various subjects referenced, but also the fact that he digested them, understood them to the point where he can explain them simply with his own interpretation, and now builds upon them to create his own work. This is even more true of the most important reference in SubaHibi: Wittgenstein’s Tractatus. The Tractatus is basically unintelligible to anyone who isn’t familiar with its context and a number of related topics. I’m not knowledgeable on this and there’s a 99,5% chance you aren’t either. But it doesn’t matter, because what’s essential is shown/explained in the game. This is where SubaHibi goes to the next step, and also where it becomes harder to have clear thoughts and be able to explain. So in order to not end up with an incoherent pile of words and keep “mon panache” intact, I’ll just evade the question. Through his personal interpretation of the Tractatus, Sca-ji actually puts on display his own vision of the world, the individual, perception, and completely subverts our vision of the story. All those words that seem meaningless in the present text acquire meaning when one finishes SubaHibi. Indeed, SubaHibi could not possibly have been anything other than a work of fiction. It couldn’t have been a treatise, it couldn’t have stated with words its vision through its characters, and I can’t explain what it’s about here, because as Wittgenstein would put it, those are of the domain of things that must be shown and can’t be said. And showing things is the appanage of art. 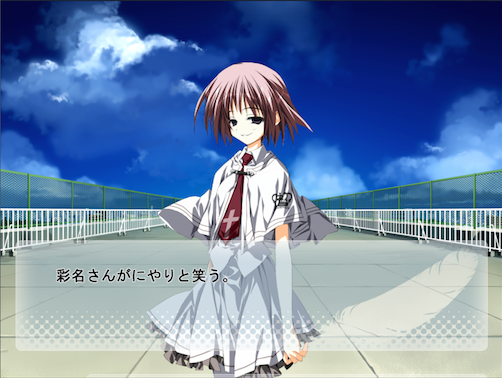 This picture actually sums up the entire game pretty well

Conclusion? Read it. Whether you’re in for the denpa, the characters, the atmosphere, the philosophy, or to get your head blown by how meaningful the whole thing is in retrospect, there are plenty of things to enjoy in SubaHibi. Despite how much it’s been worked on, it’s not an incredibly polished piece of work, but it’s a fairly unique experience. You might not love it but I doubt you’ll say otherwise once you’re done.