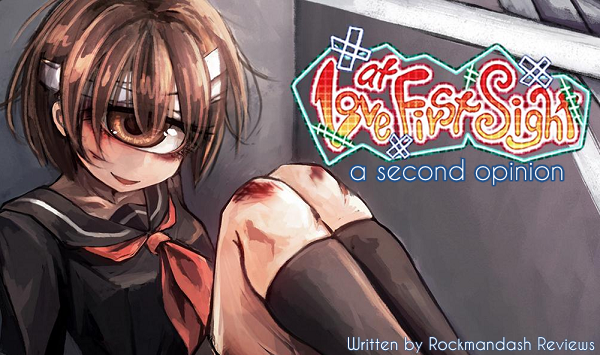 I didn’t really know what to expect when I first saw Love at First Sight: a nice, short kinetic novel published by Sekai project. It’s exactly what it says on the tin, but with a twist: it’s a love story about a guy who falls in love with a girl at first sight, it just happens that the girl that our MC falls in love with happens to be a cyclops! What??? While I appreciated the pun in the title, that appreciation doesn’t mean I fell in love with it at first sight, or really at any point while playing it. 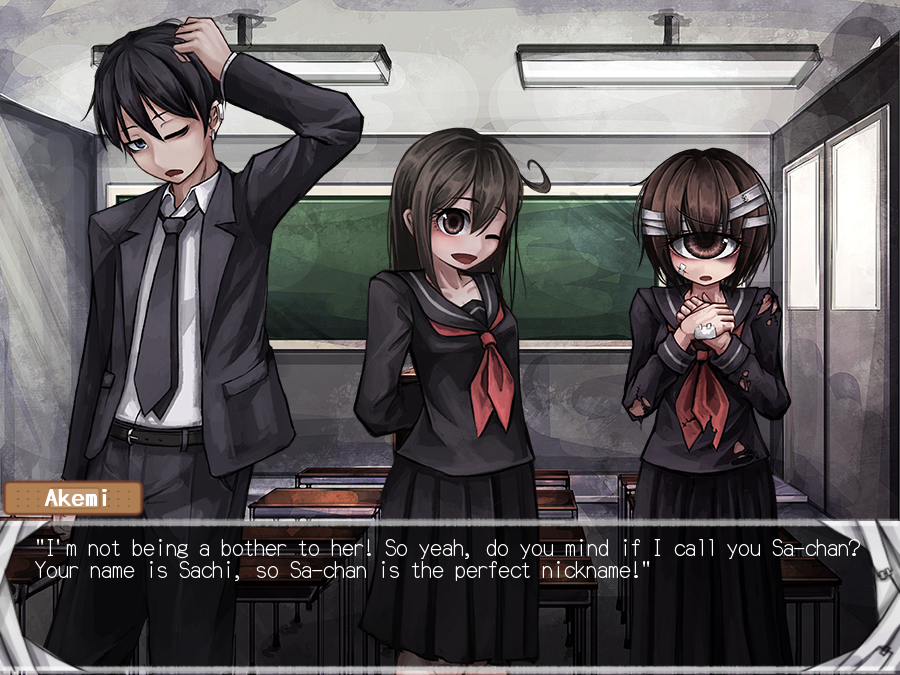 The story is about as generic as you can get. Our MC (Mamoru) is a transfer student who has two friends, who make up 2 of the 6 characters in this story. One day, he hears sobbing and meets the shy and bullied Sachi Usui, who just happens to have one gigantic eye. That being said, the disappointment starts right off the bat: while Love at First Sight does what a good love story should do decently, the writing has no defining traits, there’s nothing at all special about it. This is a tried and true story we’ve all seen before, and if you’ve seen any romance story, you’ve seen this before. For some people this won’t be an issue because it is entertaining enough and doesn’t feel like you’re wasting your time, but there’s nothing that makes this game stand out from the crowd. The only conflict in the story comes and goes in minutes, and the romance is just another typical shy girl love story. This extends to the characters too: while entertaining for the most part, you’ve seen them all before and there’s really nothing about them that stands out. The most developed character is Sachi’s aunt for heaven’s sake, and she’s not even there that long. 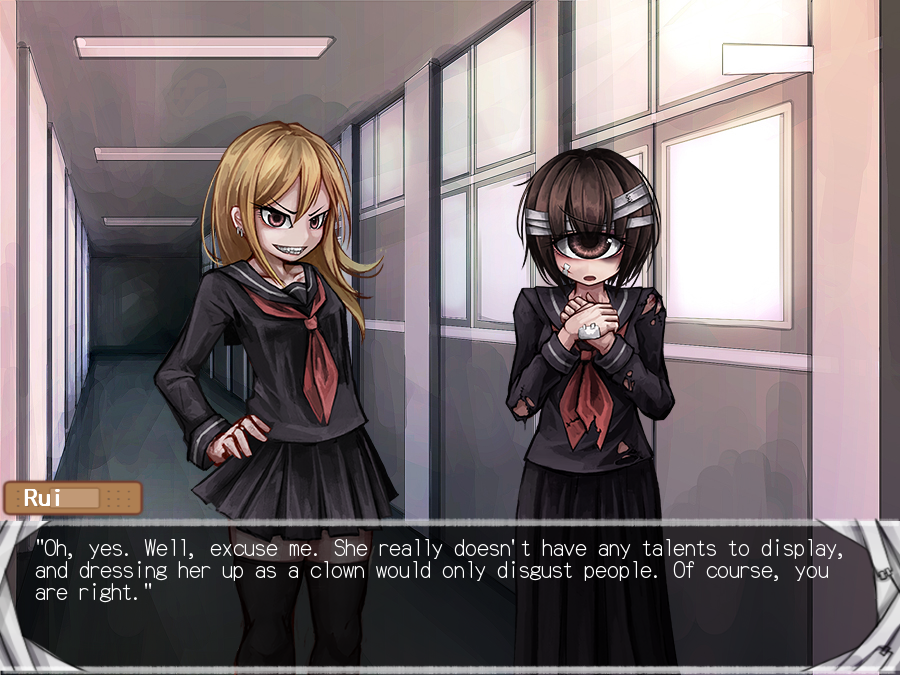 Sadly, if you are planning to buy this game due to our heroine Sachi being a cyclops, it never really comes into the play during the story. Love at First Sight is just a slice of life love story, nothing more, nothing less, and considering the fact that she’s a cyclops, it’s pretty baffling they managed to pull this off. If you’re curious as to why she’s a cyclops, how that even works, any of her background, or anything else… you are out of luck. The character’s reactions don’t change, there is no event focused on it, nothing. Hell, the fact that she’s a bullied girl plays a more important role than her being a cyclops! The game’s selling factor isn’t even a part of the story, and that’s a pretty big disappointment. 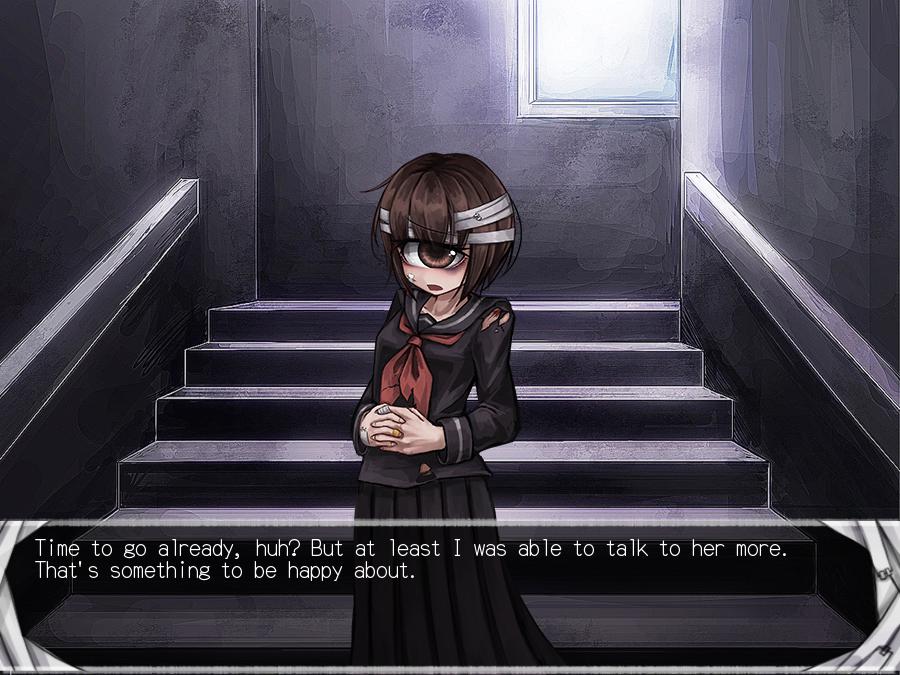 The novelty factor that she’s a cyclops is the main reason you’d want to pick this up, and it only shows in the most notable thing about this game, the visuals. Frankly, I have mixed feeling about them, but I do appreciate what they were going for. The art style really isn’t my cup of tea with its dark and rough design, but it’s a unique art style to say the least, and it’s nice to see something deviate from the norm. The art adds character to an otherwise unremarkable visual novel, and I probably wouldn’t have read through the whole game if not for how it looks, which is pretty noteworthy considering it’s only 2 hours long. In contrast, the music is nothing special. No memorable tracks, and it’s pretty subdued. It’s not something you’ll notice unless you’re looking for it, which is a bit disappointing to say the least. 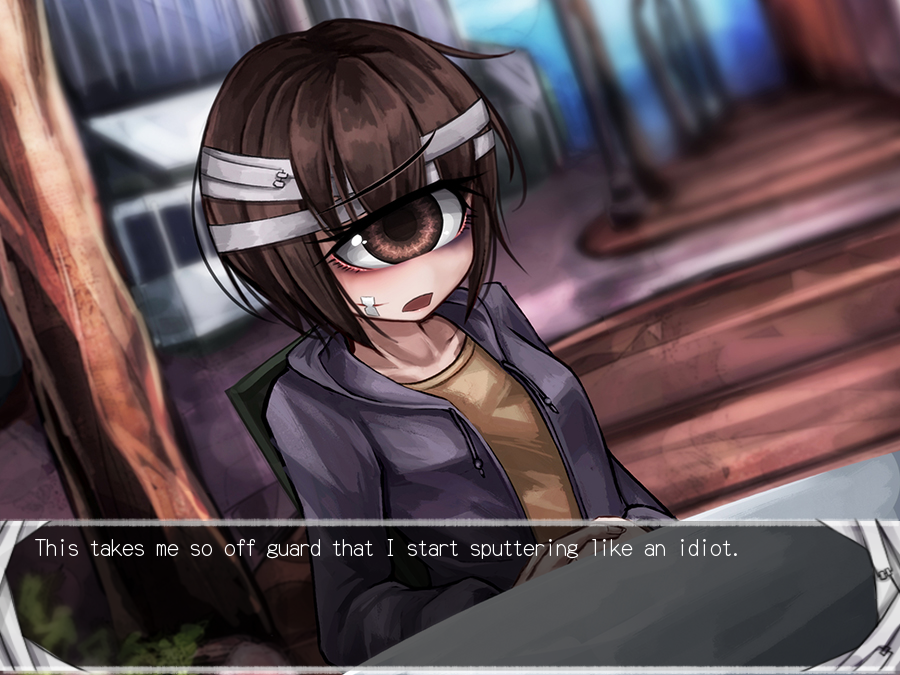 Really though, all of this leads to the question that I had in my mind throughout my entire playthrough of this game: What the hell, Sekai Project? Why would you support yet another novelty VN that nobody really asked for, and why would you price it at 10 dollars? Steam is full of much cheaper novelty VNs. If this were something that the dev wanted to do for fun and release just for the sake of it, I could give it a pass if it were free or relatively cheap. It’s an entertaining read, and it’s not a particularly bad visual novel, but it’s only 2 hours long and not worth the asking price. If you’re interested, pick it up on a steam sale or something.

If you liked this review and you’re interested in seeing more of my writing, you should totally check out everything I’ve made over on my blog, Rockmandash Reviews! I have tons of VN reviews and opinion articles, so check it out!