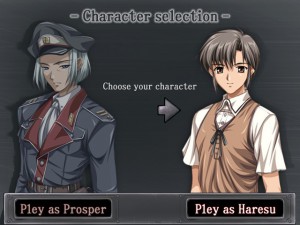 Released late in 2002 by Liquid under the title Ryoujoku Guerilla Gari, and later released in English(?) by Mangagamer in 2010, Suck My D*** or Die! is an awful nukige with very few redeeming factors, but can it possibly appeal to certain members of the viewing audience?

The short answer – hell no.  Here’s why.

Warning:  As with many of Ryechu’s Nukige Corner’s reviews, this review is NOT SAFE FOR WORK.  You have been warned!

I guess this game does have a little bit of plot, so let’s get to it. After a woman was raped and killed by the military, the military decides to cover up the incident by moving a unit into the village where the woman lived. They take over a mansion belonging to one Mr. Maxim, his daughter, Sharumi, and two servants, one of them being the main character.

Shortly after moving in, the military learns of a group of guerrillas that are stationed in the area, and believe that the other servant, Riru, is working with them. So, they capture her and torture her for information. In an attempt to save Riru, Haresu learns some devastating facts – that his teacher belongs to this rebellious group, that the military does extremely demented things, and he also learns about love.

Are you confused yet? Now cram all of that into two hours, throw in ten options for Haresu and five for the other main character, the leader of the military group that lives in the mansion, Mr. Prosper, and you have SMDoD.

I have very little positive to say about this game. I guess the art is acceptable, and there are a lot of decently drawn group H-Scenes, but everything going on parallel to that is garbage. The soundtrack sounds like somebody took some generic BGM, mangled it a few times, pissed on it, and presented it to the reader. I actually ended up muting my sound. Additionally, for a longer nukige, character development is minimal – to the point where I couldn’t even care what characters were involved in the scenes.

Oh, and the interface. Did you know that in order to access the menu to save/load/etc., you have to hit the escape button? I didn’t, and actually had to look up a FAQ to figure out how to do all of that.

And don’t get me started on the translation quality. Or the severe lack of any sort of quality control. I mean, take the synopsis of the game from Mangagamer’s own Website:

“Anti-government guerrillas were fighting against the government in a country which was politically unrest. There was an incident that a little girl was raped and murdered by the guerrillas in a small village.Prosper, the commander of the military, advanced his men to this small village to hunt the guerrillas. But the incident was all planned out by him. The girls, who were suspicious as guerrillas, were captured. It was the beginning of the insane party.”

This game is awful, but if you like group sex scenes with lots of badly written dialogue, you can pick it up from Mangagamer’s site for $14.99.

Now, I need some booze to get the bad taste out of my mouth. Excuse me.

- I didn't have enough booze to review this game.