Go! Go! Nippon: My First Trip to Japan is an all-ages visual novel, and currently Mangagamer’s only offering available on Steam.

The premise behind this visual novel is simple: the protagonist heads off for a week’s stay in Japan with two friends he met online, who show him around the sights. Before we go any further, can I just say, what kind of parents would let their two daughters stay alone in the house with a random guy they met on the internet?!

Over the course of one playthrough you get to choose 3 destinations to visit out of a total of 6 options, plus you have a trip to Kyoto, and a trip outside of Tokyo on your last day with whichever girl whose route you’ve ended up on. Then after the credits you get a cute bonus scene with your return to Japan. Total completion took me around 5 hours.

Basically this game is an advert for visiting Japan. It even gives you detailed information on how to use a SUICA, how to get into Tokyo from Narita airport, and even where to find toilets when you’re out and about (seriously).

There is a lot of infodumping about Japan’s famous sightseeing spots which personally I found quite boring, but I did learn a few new things. I definitely would have loved this game before I first came to Japan as it is an authentic and informative look at what you’ll find here. However, although a lot of the things the protagonist marvels at are things I was also amazed by when I first arrived here, I’ve since become a bit jaded about Japanese people’s obsession with their own country, so his constant exclamations at how amazing everything was did start to grate on me (I did enjoy the jibe about the size and cost of pizzas though!).

I acknowledge that that’s due to my personal circumstances rather than any real problem with the game, so the criticism I would like to highlight is that reading through so much info slowed the pace and the way it was presented was quite shamelessly promotional. Then again if you are going into this game looking to learn about Japan and its culture, then this would probably be a positive aspect for you. 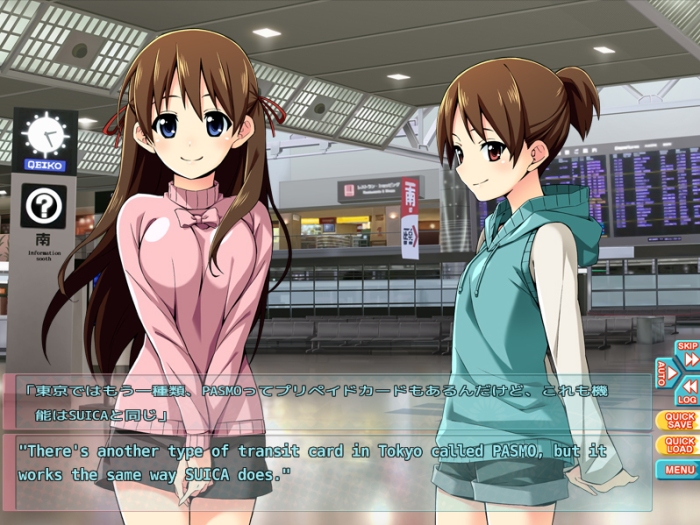 Makoto – the beautiful, polite older sister who has trouble expressing her feelings because she’s always felt like she has to be the perfect good girl.

Akira – the tsundere little sister who has trouble expressing her feelings because she’s a tsundere. 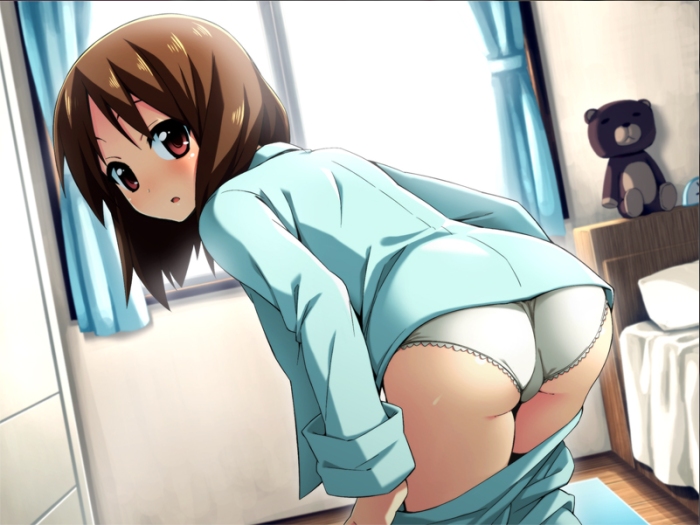 Both characters were cliches, but they were cute enough. Makoto is the type I’d usually go for since I find tsunderes pretty annoying, but in this case I actually found that Akira’s story brought the feels with the way she tried so hard for the protagonist’s last day trip to Yokohama.

The ‘Sightseeing Album’ where you can look back on the places you’ve visited and read up on them is neat. I also liked the animation during the train journeys which created a real sense of motion.

However, the art for the places and food were clearly photographs that had been put through a basic distort filter in Photoshop. Since these are one of the main points of the game, I would have liked to see higher quality images here.

There is nothing that particularly stands out in this regard, but nothing offensive either.

Whether or not you enjoy Go! Go! Nippon will really depend on what you’re looking for from it. I liked it as a concept, and I think that any animanga fan whose dream is to go to Japan will enjoy it, but personally I found it a bit boring. A lot of this is probably due to actually living where the game is set, but I also think that at points the writing got bogged down in information which made the story drag and could be a chore to get through.