Hey all! Sorry for how dead the place has been lately. I for one have been super busy with lots of random crap like university and getting my second time application for the JET programme ready. Don’t really know what the others are up to…especially Aedes >_____>. Seriously, does that guy even play eroge anymore? Rest assured that I’m still a hardcore ero-gamer and have finished the following games over the last few months:

I finished Fureraba quite a while back and had written like 50% of the review. But somewhere along the way I lost interest and it’s been half done in my drafts folder. Anyway, hope you don’t mind a review on something that’ s a little old ^^

Company: SMEE
Game site: フレラバ
Release date: June 28, 2013
Links:
It’s spring once again and the cherry blossoms are in full bloom. It’s the season of the beginning of a new life. The protagonist has lots of fun being with his guy friends, but he wishes for something more: a girlfriend! It’s not only him that has these kind of feelings; the girls around him also feel the same way. He aggressively pursues those close to him since love won’t come to those who wait.

This song is a nice change from the normal Jpop that I usually listen to ^^.

Micchi’s summary pretty much explains the whole game; the protag wants a girlfriend. The common route gives a brief introduction for 3 of 4 the heroines before moving onto the gameplay component of the game. The last heroine is pretty much isolated to her own route. 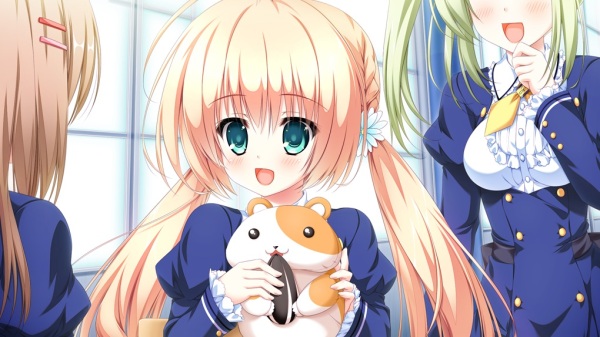 The protag’s childhood friend. The two lose contact with each other for several years and this causes their reunion as classmates to be a bit awkward. She gives off a calming aura, but has an unexpected stubborn side.

The protag and Rina have been classmates for a number of years straight leading to an inseparable, but undesirable relationship between the two. Though she has a number of boyish hobbies and even participates in dirty jokes, she has very strong pride for her girlish side.

The protag’s classmate who has a blunt and fierce attitude, with a tendency to violent outbursts when annoyed. She has a lone wolf personality and stays away from others. She is a member of the school swim team and her ability is at national level. 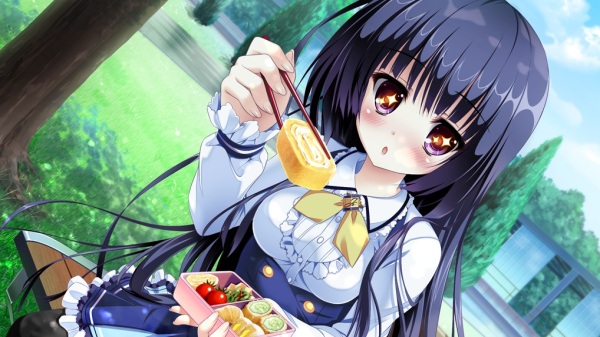 The protag’s senpai. She’s considered something of like the school’s idol and is admired by just about everyone because of her grades and good looks. Many baseless rumours are formed due to overwhelming popularity and it makes her quite unapproachable. She is a slow speaker by nature and has a very passive personality.

On each school day you’ll be given two opportunities to meet up and engage in small talk with a heroine of your choice. Within each small talk scene you select a topic (such as school life, holidays, etc), then you choose a specific thing to talk about within that topic (such as “What do you normally do on holidays”, “Do you sometimes go to sports centers”, “It’s quite expensive to go places during holidays isn’t it”, etc). Further again, within the dialogue you are sometimes required to give a response to the heroine.

Within a single small talk scene you select 2 specific things to talk about. So the above process usually will be repeated 4 times in a single day.

After engaging in enough small talk with a heroine, you’ll see an encounter an event with that heroine. These events are really what we want because they show us “real” development in the relationship between the two. As you see more of these events for a given heroine, she’ll start showing subtle changes in behaviour when you engage in small talk.

After seeing all the available events for a heroine, you’re given the option to confess to her.

The main downside of this game is that the transition from friend to lover feels rushed. This is because the small talk sessions don’t feel very significant to the actually relationship. The small talk isn’t funny, interesting or memorable. Also how you respond doesn’t seem to have any negative effect, which makes the whole process rather pointless. I would not be surprised if half the players out there held the ctrl button during these scenes.

So what we’re left with is a lot of development needed to be covered over a small number of heroine specific events. Don’t get me wrong; the events themselves are very nice ^^.  However the amount of small talk is quite overwhelming in comparison.

Not really much to say here except that you should be prepared to see a load of romantic comedy =3. Unlike the build-up to the relationship, there is no pace issue after the confession scene.

Something I found absolutely fantastic is that the game holds its light and carefree atmosphere from start to finish. Sure things get a little heated sometimes to develop the story, but things never get too serious.

Overall I found each route to be quite satisfying. However I would say that an important element of Misaki’s route was a bit too forced.

The graphics for this game aren’t anything spectacular, but they get the job done. Personally I feel that the character sprites are a tad better than the game’s CGs.

The BGMs really help contribute to the funny/stupid slice of life feeling that the game is clearly going for. I enjoyed the voice acting, but some part of me still disagrees with Misaki’s “slowness”.

Another thing worth mentioning is that you’re able to do some minor customization with each heroine; in most cases it’ll be their hair. Your choice will affect the heroine’s character sprite and some of their CGs. The CGs for all customization options are automatically unlocked, so there’s no need to play again for CG collection. 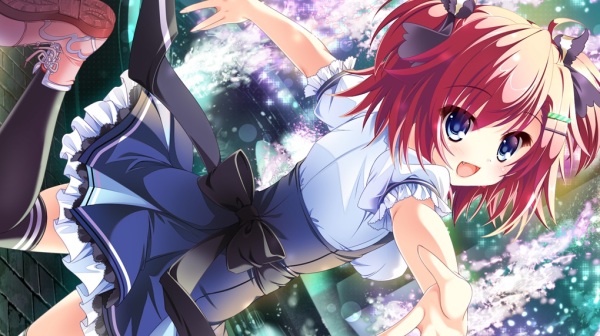 Despite the small talk system causing things to feel rushed, this was a very nice game. All the heroines are very likable and the relationship part of the game shows very nice romance scenes. The comedy scenes were very entertaining and were also decent in number. Overall a very solid slice of life game which I highly recommend.

Atm the review I’m writing for “Tsujidou-san no Virgin road” is around 40% completed and some other post I started writing is at around 60%. I’m also considering writing a piece for “Girl’s Be Ambitious”, but we’ll see how busy I am.